(RNS) — “There’s a lot of plot twists in 2020 but I have to say I didn’t count on Taylor Swift trying to turn me into a witch,” wrote one Swift fan on Twitter in mid-December.

The tweet came after the 10-time Grammy-winning singer-songwriter released her second surprise album of 2020, “Evermore,” which has caused more than a few people to speculate about whether Swift now identifies as a witch.

Much of that speculation comes from the music video for the album’s first single, “Willow,” in which Swift follows a magical thread through a dark, wintry forest. In one scene, she joins a group of cloaked figures dancing in a circle around a swirl of glowing orbs.

But Swift has also done her part to fuel the witchy theories.

The singer-songwriter has said the song “sounds like casting a spell to make someone fall in love with you” and has since released several “witch” remixes of “Willow.”

Along with the “lonely witch” remix, she posted a photo of herself on social media with the caption “Witches be like ‘Sometimes I just want to listen to music while pining away/sulking/staring out a window.’ It’s me. I’m witches.”

Similarly, she posted about the “moonlit witch” remix: “Ever find yourself waiting for the signal & meeting someone after dark & happening upon a majestic coven in the woods? Me neither but do you want your (music) to make you FEEL like that?”

Ahead of the winter solstice, Swift also released several YouTube videos pairing those remixes with video of a burning Yule log. Many witches and pagans burn a Yule log on the winter solstice to brighten the longest night of the year.

And feminist “geek” website The Mary Sue asked in a headline last week, “Is Taylor Swift A Witch Now?”

“Taylor, in embracing her witchiness, is stepping into a long and storied tradition,” Mason writes.

She also points out it’s not the first time Swift has referenced witches in her music, “mainly to lampshade how she’s often called another word that rhymes with witch.” 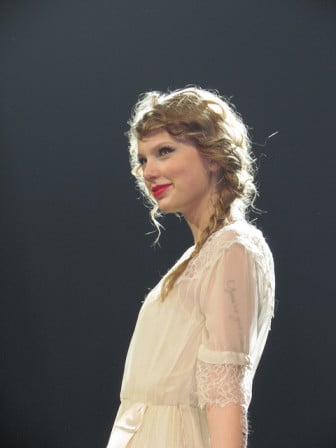 In the song “Mad Woman” on her first album of 2020, “Folklore,” Swift sings, “Women like hunting witches too / Doing your dirtiest work for you.”

She previously referenced witch hunts on her 2017 album “Reputation,” singing, “They’re burning all the witches, even if you aren’t one” on the song “I Did Something Bad” and standing atop a staircase scrawled with those lyrics in the music video for “ … Ready for It?”

“It’s obvious that Taylor loves the bad, mad woman as a stand-in for the modern-day witch,” writes Shmyla Khan on Medium.

It’s unclear if Swift’s most recent references to the craft are simply part of the witchy, “cottagecore” aesthetic of 2020’s twin albums or more personal commentary on her spirituality.

In the intimate concert film “Folklore: The Long Pond Studio Sessions,” the singer-songwriter, who got her start in country music and still lives in Nashville, describes writing songs for her first album of 2020, “Folklore,” that are less autobiographical than those on past albums, using “that country music kind of narrative device.”

Ed Hubbard of Witch School, who welcomed Swift from its Twitter account, told Religion News Service after listening to “Evermore” he believes Swift has declared herself a witch.

That’s evident to Hubbard in the whimsy, the mournful sound and the themes of her latest album: self-forgiveness, self-healing, caring for one’s self and one’s own soul.

“All magic works very simply. It’s a matter of what’s in your will, your imagination, what you want to have in the world inside your head come out of your head and exist in the world,” he said.

As recently as two years ago, Swift identified as a Christian.

In the documentary film “Miss Americana,” released earlier this year, she explains why she became more vocal about politics during the 2018 midterm elections with an Instagram post encouraging people to vote and expressing alarm about Tennessee Republican Sen. Marsha Blackburn’s voting record against the Violence Against Women Act and measures supporting LGBTQ rights.

“I can’t see another commercial (with) her disguising these policies behind the words ‘Tennessee Christian values.’ I live in Tennessee. I am Christian. That’s not what we stand for,” Swift said in the documentary.

Interest in and identification as witches has soared in recent years, fueled by politics and female empowerment, Hubbard said, and Swift appears to have made that transformation as an artist.

“A witch is self-empowered,” he said. “You don’t need the world to make you, but it takes a lot to trust yourself, to allow yourself to do that.” 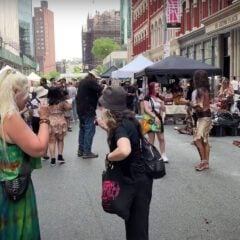 Alternative Faiths
Christian groups step up harassment of pagan festivals
Follow us on Facebook!
Submit your photos to RNS