(RNS) — For the Rev. Carol Hull, it all started with a “beautiful” Nativity set, or creche, that her father brought home from a trip to Mexico when she was a child.

Hull, now 77, remembers buying a similar scene for her children to get to know all the figures in the Christmas story.

But it wasn’t until she began volunteering at the Corning Museum of Glass in Corning, New York, that her creche collection took off.

There, she met a German artist who had been captured and held as a prisoner of war during World War II. While imprisoned, he’d carved a small Nativity set. Afterward, he continued making them, carving the figures as they might appear in different cultures — “his individual contribution to peace,” Hull said.

The museum displayed a number of his pieces — one Polynesian, another Russian, an Arctic creche with the holy family gathered in an igloo and wise men arriving by dog sled — and Hull found herself “inspired” and “enchanted.” 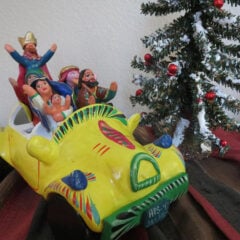 A Nativity set in a convertible in Mexico. Photo courtesy of the Rev. Carol Hull A Nativity set in style of Thailand. Photo courtesy of the Rev. Carol Hull

Today, the retired Episcopal priest has more than 100 Nativity sets.

She admits it’s a lot of work to get them all out to display at Christmastime in her home near Portland, Oregon, but it’s worth it.

“I just get joy out of looking at them for what they represent religiously, but also just because a lot of them are really beautiful,” Hull said.

Many Christians decorate their homes with a Nativity set alongside their trees and stockings as a reminder of the story of Jesus’ birth at the heart of their Christmas celebrations.

Those sets invariably include figures representing baby Jesus along with his mother, Mary, and Joseph, who Christians believe raised the son of God as his own. Sets also often include shepherds, wise men, angels, animals and other figures from the story recorded in the Gospels.

The tradition got its start in 1223, when St. Francis of Assisi staged the first scene in Italy, according to Neil Allen, co-chair of Friends of the Creche’s 2021 convention in Portland, Oregon.

In the centuries since, the scenes have moved from churches to homes, and some Christians have made creche collecting a hobby. 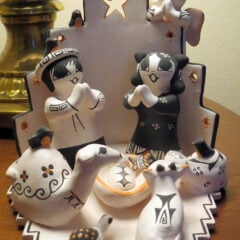 A Nativity set in style of Acoma Pueblo. Photo courtesy of the Rev. Carol Hull 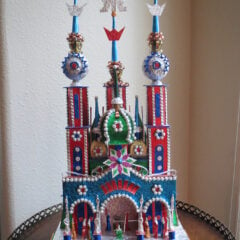 A Nativity set in style of Krakow, Poland. Photo courtesy of the Rev. Carol Hull

For those collectors, the scenes are both universal — something shared by all Christians — and deeply personal — reflecting their own cultures and even interests. There are Halloween Nativity sets with Frankenstein’s monster and his bride standing in for Joseph and Mary, and a tiny vampire in a coffin for baby Jesus in the manger. There are minimalist versions that are no more than colored blocks, hipster versions with iPhones and Segways, versions in which the figures all are cats or even food items.

Friends of the Creche has more than 400 members in the United States and Canada, according to Allen, a retired pastor in the Christian Church (Disciples of Christ). They likely have 400 different reasons why the creche is meaningful to them, he said.

For one, it’s a way for people to enter into the Christmas story, to expand their view of it, to bring it to life, he said.

“People are really excited to see different presentations of the Nativity, and so there’s a real power in that to communicate the good news,” Allen said.

Some collectors open their homes at Christmastime to share their displays. Others show them at churches or seasonal exhibitions like the Peoria Area Community Festival of Nativities in central Illinois. Displays at the Community Festival of Nativities in Peoria, Illinois, in December 2017. Photo courtesy of Shelly Crespo

Shelly Crespo started the Peoria festival four years ago after visiting a similar exhibition in Texas, she said.

Not only was it beautiful, but also unifying for Christians of all denominations whose beliefs differ in many ways, said Crespo, a member of The Church of Jesus Christ of Latter-day Saints.

“I thought there’s probably nothing else like it in this world — this story that has touched so many hearts and continues to today. And that makes people full of hope and wonder,” she said.

Amid the pandemic, the Peoria festival has moved online, becoming the Worldwide Virtual Nativity. The virtual exhibition features photos and video of creches from more than 100 contributors and already has been viewed on YouTube nearly 11,000 times.

There’s a 2,000-piece set of popular Fontanini figures owned by collectors Michael and Diana Lage that depicts not just Jesus’ birth, but also the events of his life and death. There is an Ecuadorian scene carved from nuts, felted figures from Nepal, a Slovakian holy family made from corn husks. 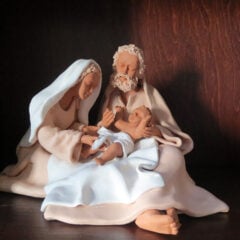 A Nativity set in style of Spain. Photo courtesy of the Rev. Carol Hull A Nativity set in a Peruvian style. Photo courtesy of the Rev. Carol Hull

Compared to many “mega collectors,” Hull’s collection is quite modest, she demurred.

It’s been picking up since she retired 12 years ago and began to travel more, collecting creches from the countries she’s visited. As an art collector, she said, the beauty of each piece appeals to her. She also loves seeing all the ways Jesus is depicted that are unique to those cultures.

Her favorites include a set from Thailand that includes a water buffalo among its animals and one from Mexico that has Mary, Joseph, Jesus and three wise men waving from a yellow convertible. Another favorite came from Prague, she said: Mary holds a bottle and Joseph, a teddy bear. Jesus has a binky in his mouth.

Christmas celebrates the moment when Christians believe “God took on human flesh and lived and walked among us,” Hull said.

“It’s an event for all of humanity, so why shouldn’t individual cultures portray it as it is for them?” 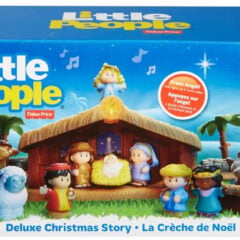 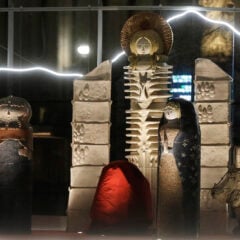 News
Vatican unveils nativity scene and lights up tree for Christmas
Faith
Pope: Sorry I lost patience with hand-shaker who yanked me 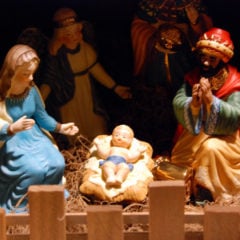 Faith
How St. Francis created the Nativity scene, with a miraculous event in 1223 News
‘You’ve got to call out evil,’ says pastor of church with Nativity scene separated in cages
Follow us on Facebook!
Submit your photos to RNS