WASHINGTON (RNS) — A throng of religious supporters of President Donald Trump swathed in red, white and blue kicked off a “Jericho March” on Tuesday (Jan. 5), marching around the U.S. Capitol in imitation of the biblical account of Israelites besieging the city of Jericho in the Book of Joshua.

Others wore “Make America Great Again” hats, waved flags featuring Trump’s name in giant block letters, held signs emblazoned with slogans such as “Donald v. Goliath” and brandished cardboard cutouts of the president’s face. As they marched, some spread their arms wide and closed their eyes as the mostly maskless group belted out a contemporary Christian hymn: “How Great Is Our God.”

Fusing faith, nationalism and fervent Trump fandom, the event served as the religious expression of a broader conservative protest taking place in Washington this week, in which conservatives are voicing opposition to President-elect Joe Biden’s victory by espousing unfounded conspiracy theories about voter fraud.

The exuberant religious display at the Capitol contrasted sharply with the sentiments of faith leaders who call Washington home. Many have taken security precautions as they prepare for a possible repeat of what happened hours after another “Jericho March” in December, when Trump supporters attacked houses of worship in Washington, tearing down several Black Lives Matter banners and setting one aflame.

Jericho Marchers, some of whom have been in the city for days, originally planned to gather in front of the U.S. Supreme Court for a prayer session on Tuesday morning. But their demonstration was unexpectedly cut short when local police found a “suspicious package” near the assembly.

As they moved across the street for safety, one man shouted into a megaphone: “A suspicious package is nothing compared to eugenic tyranny!”

Nearby, a woman gathered with a prayer group said she felt “cheated” by the election results and called on God to “intervene.” Another member of the circle, Anne Scharer, told Religion News Service she came to Washington to stand for religious freedom and to “keep God at the forefront” of the country, an idea she said was “written into the Constitution.”

Asked about the 2020 election results scheduled to be approved by Congress on Wednesday, Scharer responded by saying she believed “there was cheating” and that “our freedoms are being taken away.”

Like many participants, Scharer, who grew up Baptist, did not wear a mask despite Washington’s mandate that masks be worn in public, which she maintained was a matter of choice. She alleged that the novel coronavirus was manufactured to influence the 2020 election, a conspiracy theory for which there is no evidence. The Rev. Anne Armstrong of the Healing Church of Rhode Island, right, and a companion blow smoke through shofars during the “Jericho March” near the U.S. Supreme Court on Jan. 5, 2021, in Washington. RNS photo by Jack Jenkins

Many at the Jericho March brandished Jewish ritual horns known as shofars. Among them was the Rev. Anne Armstrong, who early in the day was adorned in a white alb, emblazoned with an image of Our Lady of Guadalupe, blowing smoke through a large shofar. A man beside her, similarly attired, was doing the same.

Armstrong later explained she belongs to The Healing Church, a Rhode Island religious group that holds cannabis in high esteem.

“We worship God, not President Trump,” said Armstrong, propping the horn on her shoulder. “But we support him because he’s won the election, and it makes me really mad as a citizen that somebody thinks they could cheat us.”

At the December Jericho March, speakers such as conservative evangelical commentator Eric Metaxas, conspiracy theorist Alex Jones and a newly pardoned Lt. Gen. Michael Flynn addressed a massive crowd on the National Mall. At one point Marine One, the president’s helicopter, hovered above to roars from his supporters.

Widely shared footage from that night documented men adorned in yellow and black — the uniform colors of Proud Boys — ripping down Black Lives Matter signs from churches and, in one instance, setting a banner on fire in the street. Jones praised the group in an impromptu appearance at a local hotel for “marching off to take this city’s streets back,” adding, “We pray for them, and we salute the Proud Boys!”

Churches are being vigilant this week as Proud Boys and others return to the city. “We’re going to continue to be engaged in social justice, and undeterred in declaring that Black Lives Matter,” Darryl Wyles, a lay leader at Asbury United Methodist Church, told RNS. The historic Black congregation’s Black Lives Matter sign was set ablaze in December, replaced and then stolen again over the Christmas holiday. 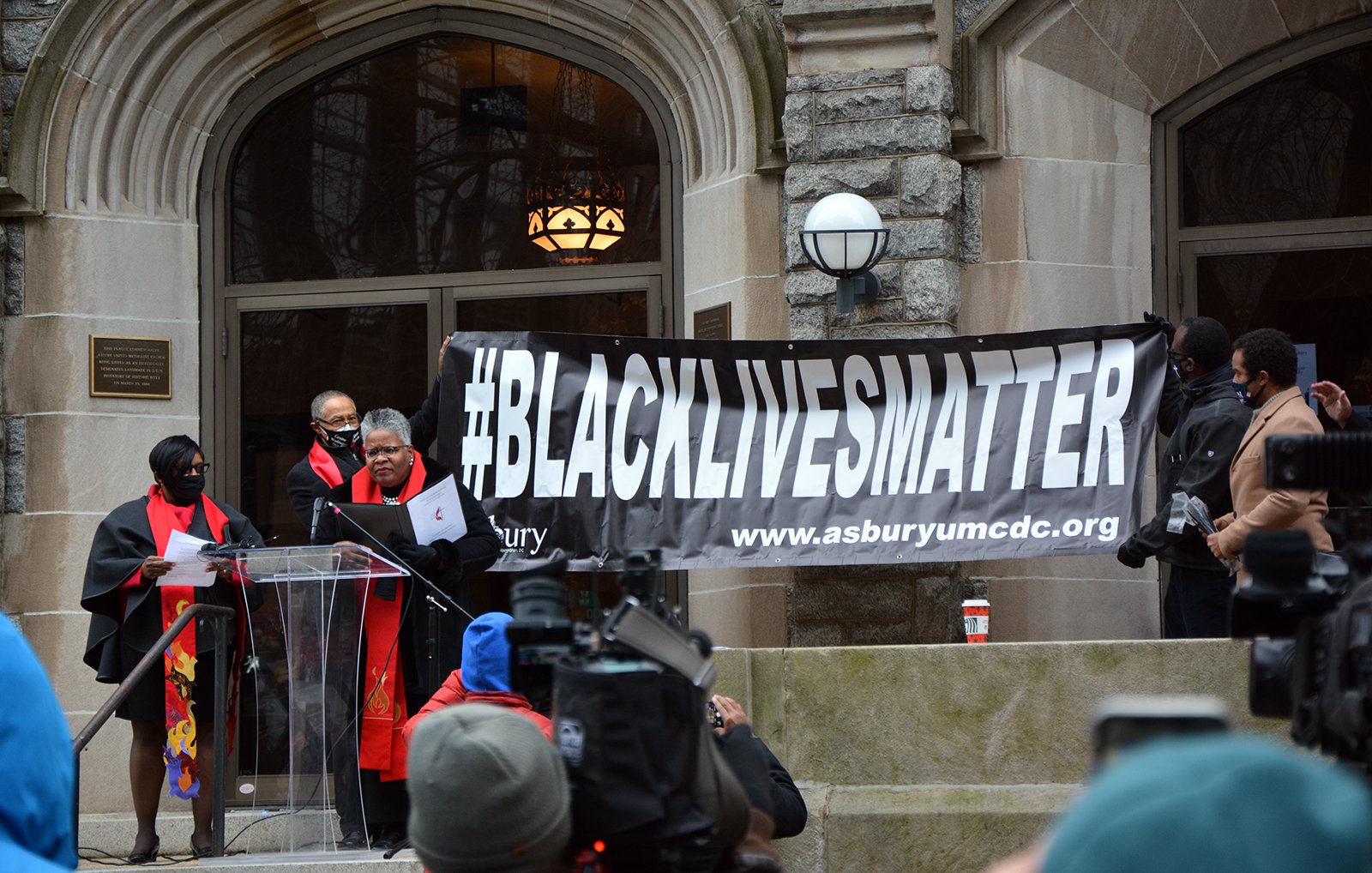 Bishop LaTrelle Easterling, third from left, speaks at the unveiling of a new Black Lives Matter sign at Asbury United Methodist Church on Dec. 18, 2020, in Washington. The new sign was stolen over the Christmas holiday. RNS photo by Jack Jenkins

The church has taken precautions to protect its property and asked Washington police for additional security. “They have been very proactive during the investigation reaching out to us to make sure we’re OK,” said Wyles.

On Monday, the Metropolitan Police also arrested Proud Boys leader Enrique Tarrio for his role in the Asbury sign-burning, and a judge has since banned him from the city. The arrest happened the same day Metropolitan AME, another historic Black church whose Black Lives Matter sign was publicly destroyed by Proud Boys, filed suit against Tarrio and his group.

Tarrio received prayers from Trump supporters on Tuesday evening, when Pastor Greg Locke led a crowd in praying for the Proud Boys leader his organization.

He added: “Lord, they may get a bum rap on the news media, but we just thank God that we can lock shields, and we can come shoulder to shoulder with people that still stand up for this nation.”

At Mount Vernon Place United Methodist Church, whose sign decrying violence against multiple groups was also torn down in December (it has been replaced with a Black Lives Matter banner), the Rev. Donna Sokol said police were present near the church steps over the weekend.

Meanwhile, National City Christian Church, a Disciples of Christ church in downtown Washington, announced this week that it plans to unveil a 16-foot Black Lives Matter banner outside its sanctuary on Wednesday.

“In response to ongoing fearmongering and racial hatred, the ‘national church’ of the Christian Church (Disciples of Christ) will bear witness to love and inclusion,” read the church’s statement. 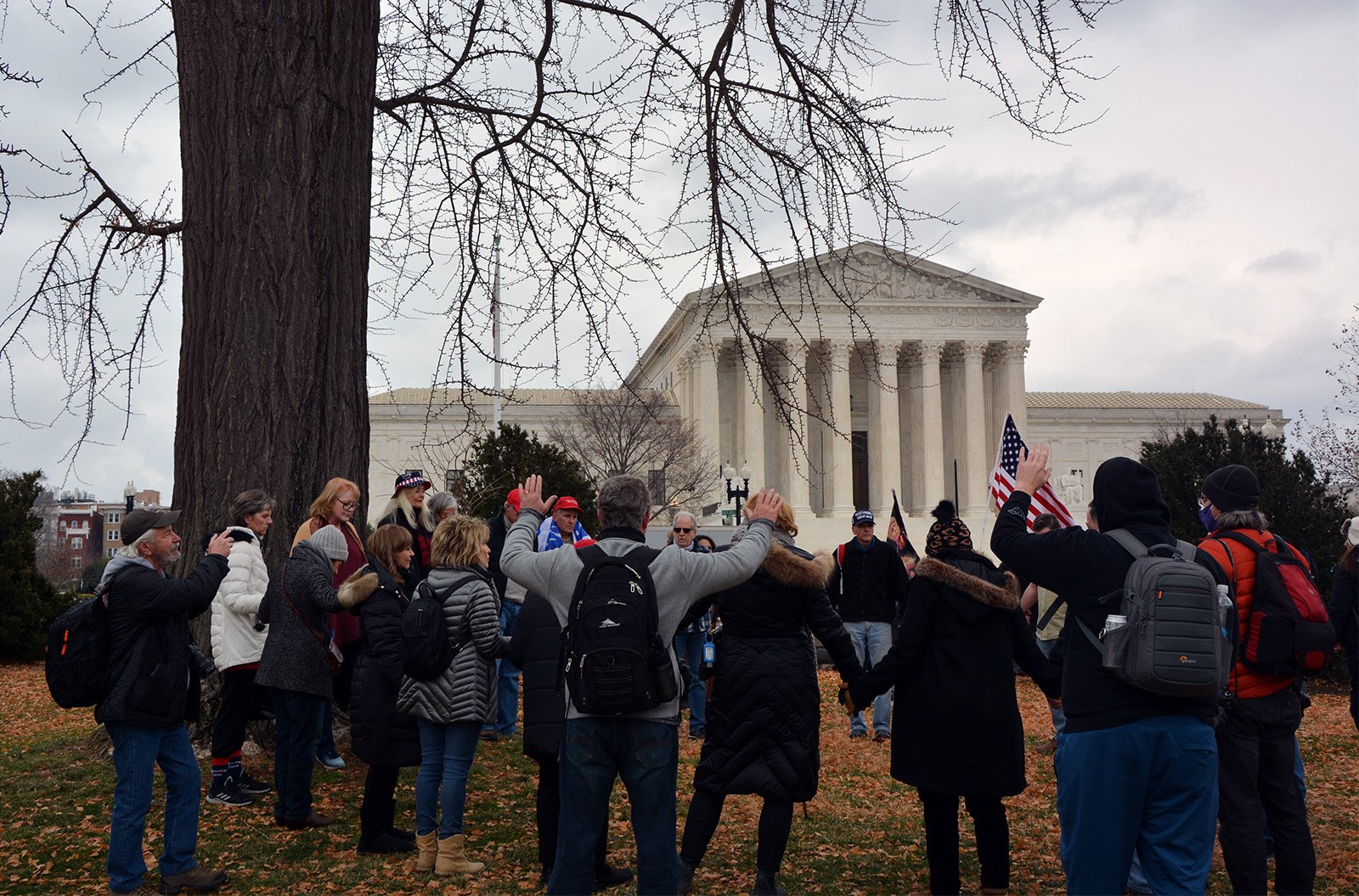 Some faith groups have opted for a less confrontational approach. The Baltimore-Washington conference of the United Methodist Church has called on member churches to heed D.C. Mayor Muriel Bowser’s request to avoid the city’s downtown Tuesday and Wednesday, and to light candles in their windows instead.

“The decision not to stage a counter-protest does not mean that United Methodists are in any way stepping away from their commitment to the democratic process or to justice and peace,” read a statement from the conference. “Rather, leaders have discerned that a heated confrontation with those planning to descend on the capital does not further our stand for justice.”

Other faith leaders are taking precautions, including those in Capitol Hill, which is expected to be the epicenter of several demonstrations on Wednesday. The Rev. Michele H. Morgan, an Episcopal priest whose church sits near the Capitol, said in a Facebook video on Monday that she locked up the congregation’s patio furniture and removed loose bricks from the perimeter to limit potential “projectiles” that could be lobbed.

For their part, Jericho Marchers plan to lead another procession on Wednesday, where they hope “God will reveal the truth.”