The lawsuit, which was filed in D.C. Superior Court on Monday (Jan. 4), accuses the Proud Boys, an organization the Southern Poverty Law Center classifies as a hate group, of attacking Metropolitan African Methodist Episcopal Church and “engaging in acts of terror and vandalizing church property in an effort to intimidate the Church and silence its support for racial justice.”

The suit harkens back to Dec. 12, when thousands of Trump supporters descended on Washington, D.C., to protest Joe Biden’s victory over the president in the 2020 election. Among them were Proud Boys, who were filmed destroying and burning Black Lives Matter signs that belonged to churches. Proud Boys leader Enrique Tarrio, who is also named in the Metropolitan AME lawsuit, has since claimed responsibility for the burning of a Black Lives Matter sign belonging to Asbury United Methodist Church, which was replaced before it was stolen again in late December.

Dec. 12 footage from outside Metropolitan AME, a historic Black church in downtown Washington that has hosted famous preachers and politicians, showed men dressed in black and gold — the Proud Boys’ chosen colors — jumping the church’s fence, tearing down a Black Lives Matter sign and destroying it as a crowd cheered.

On my sabbath, I wake up to the disgusting image of #ProudBoys ripping down a #BlackLivesMatter banner from my church. Will #Trump , who held up a bible in front of a church, bless not condemn this racist vandalism against Metropolitan AME Church ❓ @ap pic.twitter.com/yHy3N4X5rq

The lawsuit characterizes the act as “a new and dangerous chapter in the long and terrible history of white supremacist mob violence targeting Black houses of worship.”

“We, the descendants of these extraordinary women and men of God, will not allow white supremacist violence to go unchecked by the laws of the land,” he said. “On January 4, 2021, I declare that we will be victorious against these white supremacists because God is with us, Jesus Christ is on our side, and our ancestors surround us. We are on the side of justice and justice will prevail.”

When asked about the complaint by a journalist from USA Today, Tarrio reportedly said that he “welcomes” the lawsuit.

Tarrio was then arrested — potentially during his interview with USA Today — apparently in connection to the burning of Asbury UMC’s sign.

“(Tarrio) was charged with Destruction of Property related to an offense that occurred on Saturday, December 12, 2020,” read a statement Washington’s Metropolitan Police Department sent to RNS on Monday. It stipulated that the offense occurred on the same block where Asbury is located.

“At the time of his arrest, he was found to be in possession of two high capacity firearm magazines. He was additionally charged with Possession of High Capacity Feeding Device.” 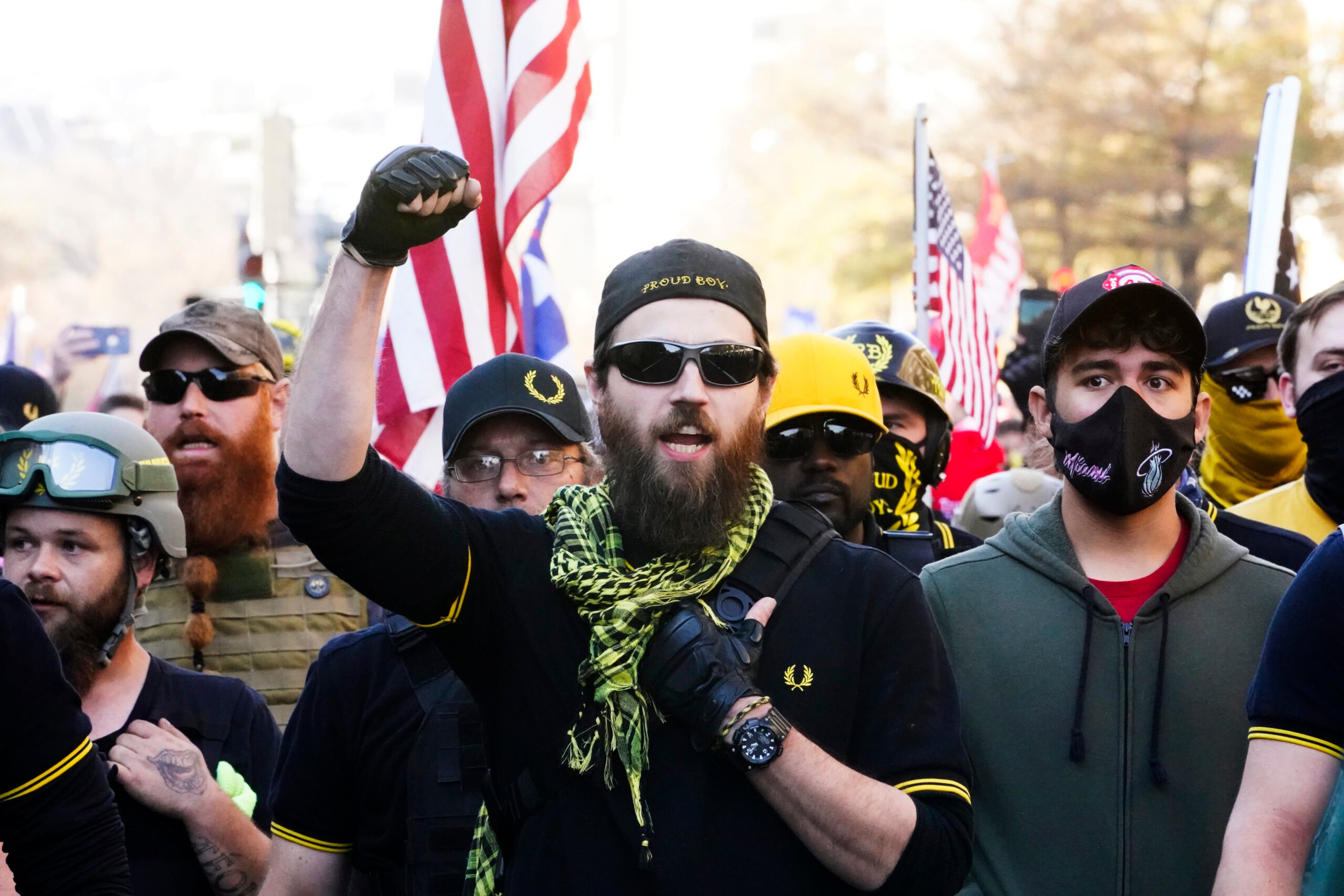 People identifying themselves as members of the Proud Boys join supporters of President Donald Trump as they march, Saturday, Nov. 14, 2020, in Washington. (AP Photo/Jacquelyn Martin)