(RNS) — We can be sure some who stormed the Capitol claimed allegiance to the Christian faith.

Banners proclaiming “Jesus saves” appear next to those bearing the name Trump in the images of the protest and ensuing occupation of the Capitol. All were not Christians, but we know the most faithful supporters of President Trump over the years have been conservative white believers.

They claimed supporting the president was about making America great again. This was always problematic, because the moment one makes an unqualified appeal to a bygone America, one harkens back to an even further racialized and stratified America. They are not easily separated. American nostalgia often threatens Black and brown freedom. Therefore, it was no surprise to see pro-Trump rioters flying Confederate flags as they invaded the halls of the Capitol.

Black people have known what this was really about from the beginning. The ongoing protest of the election is not about a search for truth; it is an attempt to shape truth to suit the desires of the powerful.

The Gospel of John records a scene in the last days of Jesus’ life. In it Pilate, the Roman governor of Judea, asks if the claims about Jesus being king are accurate and by implication seditious. Is Jesus a friend of Rome or its enemy?

In reply to Jesus’ statement, Pilate asks, “What is Truth?”

Pilate, in his mind, was introducing Jesus to the world of real politic. Philosophical niceties and existential missions mattered little when Pilate controlled a legion and could put Jesus to death if he found it expedient.

What does truth matter, after all, when a mob can storm the Capitol?

In a strange twist of fate, some who follow the same faith tradition that shaped me are only interested in loyalty oaths. Are we a friend of the president or his enemy?

But the scene between Pilate and Jesus embodies the church’s claims over and against the state ever since: Power and truth can be separated. Those with money, popularity and resources do not determine reality. 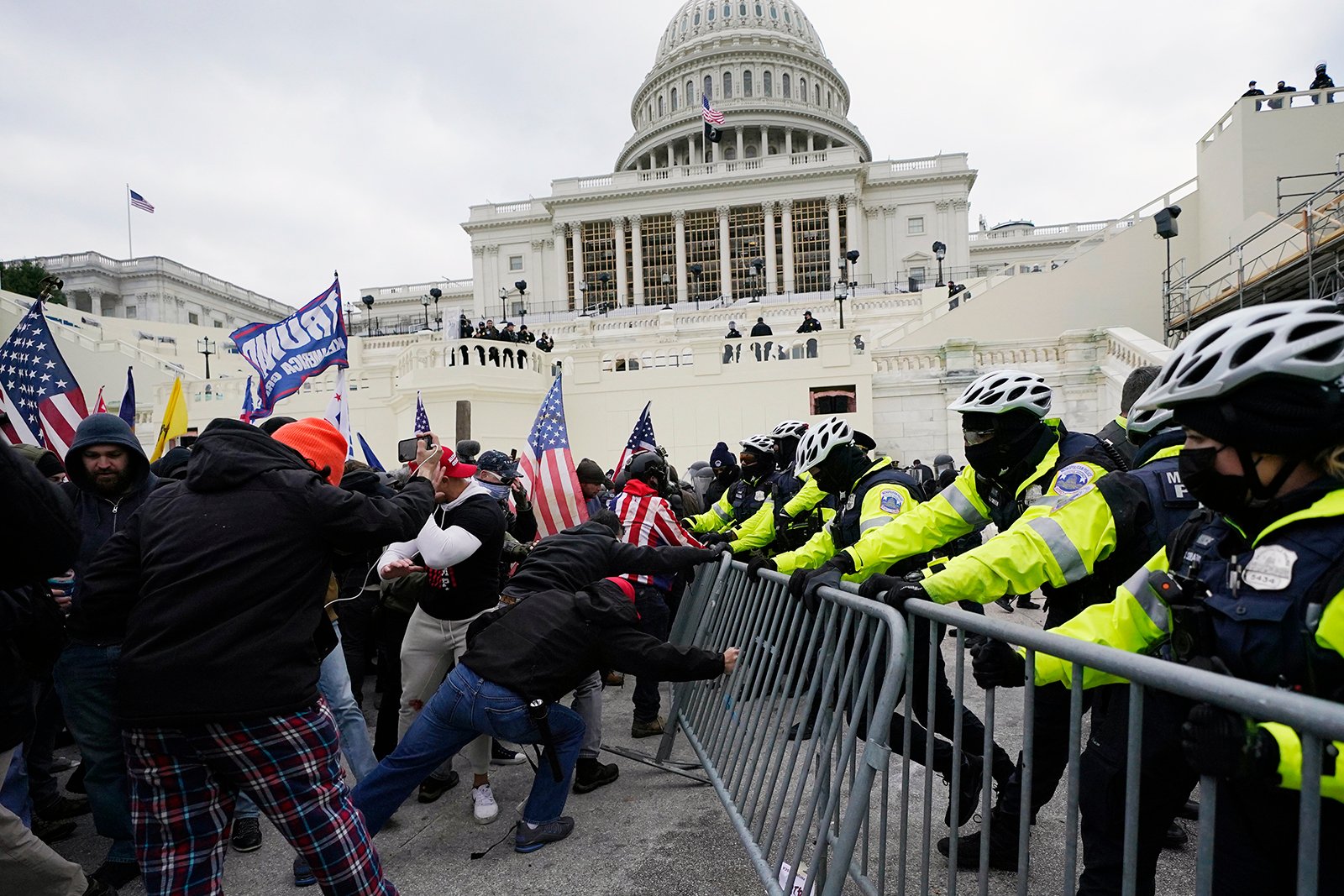 Trump supporters try to break through a police barrier Jan. 6, 2021, at the Capitol in Washington. (AP Photo/Julio Cortez)

Those early Christian abolitionists like Frederick Douglass and Sojourner Truth did not have the power to end slavery by declaring it over. They went out armed with the truth of the thing, a claim about what Black persons were. Black inferiority remained a lie no matter how often those in power insisted on it.

But God’s will for the freedom of Black bodies and souls was not a popular truth to tell then, even among Christians. Most churches would not host abolitionist meetings. So, they went into the fields and marketplaces. They were called a danger to the unity of the country and the church, but they persisted. The church and the world are better places because of their sacrifices.

In a similar vein, a multiethnic coalition of Christians has raised its voice of concern about the president, often at great cost. Our faith has been questioned, and we have been called extremists for simply telling the truth.

The president remains wildly popular with his base. Some 74 million people voted for him in the last election. In the audio of his phone call to Georgia politicians, he said, “We won very substantially in Georgia. You even see it by rally size, frankly. We’d be getting 25-30,000 people a rally, and the competition would get less than 100 people. And it never made sense.”

It is precisely this threat he hoped to use to influence officials. When he said “many people are upset” about the result, he had in mind his supporters. He implied there would be political consequences for not supporting his interpretation of the data, which has been rejected by every court and government institution charged with ensuring the validity of the election. Gabriel Sterling, a Republican electoral official, has refuted each of Trump’s claims about the Georgia election.

In other words, President Trump wasn’t making a legal or a factual argument. He was using his power to put a thumb on the scales. Therefore, the ongoing support of these unproven theories of election fraud by some white conservative Christians does not simply weaken the church’s witness by making it partisan. It weakens our witness by aligning truth with power — a classic error that has always led to ruin.

Whenever truth bends to power, the poor and the marginalized inevitably suffer.

Now that the mob has left the Capitol, who will bear the brunt of this rage? If the end of reconstruction or the backlash at the end of the civil rights movement are any indication, the brunt of the ire will be directed at Black and brown communities.

Let us speak plainly. Black and brown voters proved decisive in Wisconsin (Milwaukee), Michigan (Detroit), Georgia (Atlanta), and Pennsylvania (Philadelphia). The call to overturn this election can rightly be seen as an attack on Black enfranchisement. The Black vote is something that has been suppressed through threats and mayhem throughout the history of this country.

The rhetoric surrounding the election is not simply a matter of agreement or disagreement. It is about the creation of a national mood in which ethnic minorities and vulnerable people suffer the most. We cannot pretend bending truth to power has not led as a matter of course to racialized violence.

In the end, Pilate decided it was in his best interest to have Jesus killed. Before he does so, Pilate has Jesus flogged. He presents him beaten and bloody before a crowd of onlookers with the words, “Behold, the human” (John 19:5).

The church has always seen a profound truth in these words. As the one beaten and bloody, Jesus reveals what humanity was designed to be. Strength and transformation do not come through the assertion of the will. Strength is the willingness to suffer and to be counted as weak, to be on the side of truth and love.

For the Christian, we are not most human when we toss away our integrity to hold on to power or when we cower in silence. We are most human when we live completely in accord with the truth. For the Christian, this is not a theory about how one might live. The resurrection proves transformative power can come out of weakness — God can snatch victory out of certain defeat. The resurrection, the triumph of the humiliated and seemingly powerless one, frees us to tell the Pilates of the world the truth.

Their desire for something to be true doesn’t make it so. The truth exists outside of them. It belongs to God. This fact frees Christian leaders to tell the truth to their congregations, even if the pews empty. Trump lost the election. That isn’t a partisan statement. It is a true statement that, if repeated loudly and consistently enough, might, even in the last days of this presidency, help portions of the church find itself.

(Esau McCaulley, PhD, is the author of “Reading While Black” and an assistant professor of New Testament at Wheaton College. The views expressed in this commentary do not necessarily reflect those of Religion News Service.)