(RNS) — On Tuesday (Jan. 12), I was invited to talk at a roundtable on religious freedom the progressive activist group Faith 2020 had organized with diverse faith leaders and the Biden-Harris transition team, notably Josh Dickson, the president-elect’s national faith engagement director. Though my official credential was senior fellow at the Sikh Coalition, the White House didn’t want to hear about Sikhism; Dickson was there to hear what a religion scholar thinks should be his boss’s policy priorities on faith matters.

What I told him had as much to do with racial justice as religious freedom, as the two are inextricably linked. We can’t understand American racism without attending to the ways in which religion has been used to prop up white supremacy. It’s not only African Americans who have been treated this way. Religious minorities, from Jews to Hindus to Muslims, are seen through the lens of race as much as faith and have been discriminated against, personally and systemically.

In recent years, in addition, religion has been weaponized to uphold America’s racism. We saw this in President Donald Trump’s answer to racial justice protesters last summer: He sent federal troops to clear his way to St. John’s Church in Washington, D.C., for a photo op with the Bible.

How might an anti-racist lens help expand our guarantees of religious freedom? For the past four years, and in some cases long before, the Sikh Coalition and so many other organizations at the intersection of faith and policy have been working to answer that question.

First, the new administration must address Trump’s decimation of America’s refugee policy and the profound impact that’s had on religious freedom abroad. For Muslims in China and Myanmar, and for Sikhs and Hindus in Afghanistan, this continues to mean life or death.

In May 2020, candidate Joe Biden called for the State Department to consider emergency refugee protections for Afghan Sikhs and Hindus, and he has more recently promised to raise the annual refugee cap back to 125,000. The sooner that can happen, the quicker we can begin to return to being a nation that helps the world’s most desperate, which includes so many fleeing religious persecution in some of the poorest parts of the world.

(This was an area where the Trump administration’s rhetoric and policy never matched: claiming to champion religious freedom, while dropping our nation’s refugee acceptance level to unprecedentedly low levels.)

The immigration bans that were a defining feature of the Trump administration can be repealed immediately, but Biden can go further by urging Congress to pass the No Ban Act, which would guard against future abuses. And it can work to eliminate policies, such as “extreme vetting,” that function as a backdoor ban on foreign travel. 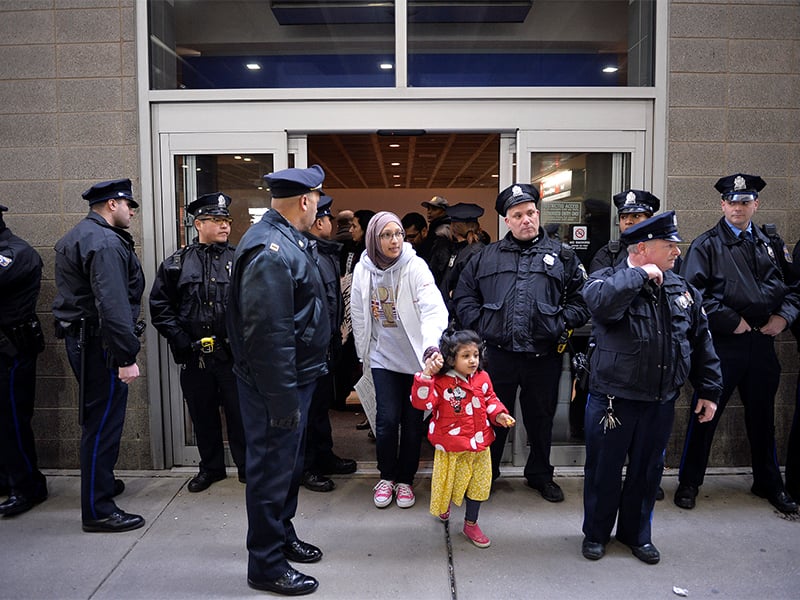 There are other, long-standing problems that need longer-term solutions. Employment discrimination affects religious minorities in every facet of American life. When we deny people their right to practice their faiths freely in the workplace, we ask them to choose between their sincerely held beliefs and their security and happiness.

The Biden administration can effect change most readily by continuing to push the Department of Defense, our nation’s largest employer. President-elect Biden made a campaign promise “to ensure reasonable religious accommodations across all our armed services”; while the Army and the Air Force already made religious accommodations easier with policy changes in 2017 and 2020 respectively, the Navy, Marine Corps, Coast Guard and Space Force still require forward progress.

Establishing fairness among the military’s millions of employees will seed change across the whole culture and send the message to employers all across the country that the administration will not tolerate discrimination.

We must also keep religious minorities safe in schools. Children from religious minority groups remain disproportionately bullied in our nation’s public classrooms. Much of the work to stop this must be done at the state level, beginning with teaching about world religions to mandated standards. The administration can provide funding for anti-bullying initiatives and educators’ professional development, and for raising cultural awareness.

The feds can also make sure that any schools receiving public funds, including charter and private, are not permitted to exclude students on the basis of religious beliefs.

Lastly, Biden and his team can overturn one of the many last-minute initiatives in the final days of the Trump administration that curtail civil rights enforcement across the government.

These eleventh-hour proposed changes include an unhelpful update to the Equal Employment Opportunity Commission’s Compliance Manual on Religious Discrimination, the lifting of certain anti-discrimination restrictions on religious schools that receive Department of Education funding and — perhaps most alarmingly — an effort by the Department of Justice to stop the enforcement of Title VI of the Civil Rights Act.

The latter change, proposed in late December, calls for narrow enforcement of the law’s protections, only in cases where it can prove intentional discrimination. Moreover, it deliberately removes any protections against systemic policies or practices that, even if unintentional, tend to have a “disparate impact” on minorities.

If implemented, it would become the first significant amendment to how the Department of Justice defines or enforces Title VI — and the single biggest step backward in nearly 50 years.

I’m grateful to see leadership that truly seems to care and truly wants to build something together. I’m hopeful for what’s to come in the next four years.

News
DHS panel on security for houses of worship begins its work
Follow us on Facebook!
Submit your photos to RNS