LOS ANGELES (RNS) — At St. Brigid Catholic Church, the Rev. Kenneth Keke preaches that the gospel of Jesus Christ is not only about eternity, but about “having a human face, loving one another.” Keke’s message stresses unity and that a “common humanity is what we need for us to live in peace.”

“That is liberation theology and that is what we preach here,” said Keke, the St. Brigid priest from Nigeria.

This is the South Central Los Angeles church where 22-year-old Amanda Gorman, the youngest inaugural poet in U.S. history, grew up singing in the youth choir, taking her sacraments and reciting her poetry.

Gorman, who graduated from Harvard University last year, captivated Americans with the recent recitation of her poem on national unity at President Joe Biden’s inauguration. Since that day, she has signed on with IMG modeling agency and has been invited to recite a poem at the Super Bowl on Feb. 7.

RELATED: Amanda Gorman, my grandma and the Black tears we cried

“She would always get standing ovations,” said Floy Hawkins, a parishioner and former director of religious education at St. Brigid. “We were in just as much awe of her then, as we were when we all witnessed her at the inauguration.”

St. Brigid, which established in a small rented house in 1920, has a rich history in Los Angeles.

“St. Brigid was one of the first parishes in the Archdiocese of Los Angeles that encompassed the entirety of Black Catholicism,” said Anderson Shaw, director of the African American Catholic Center for Evangelization. 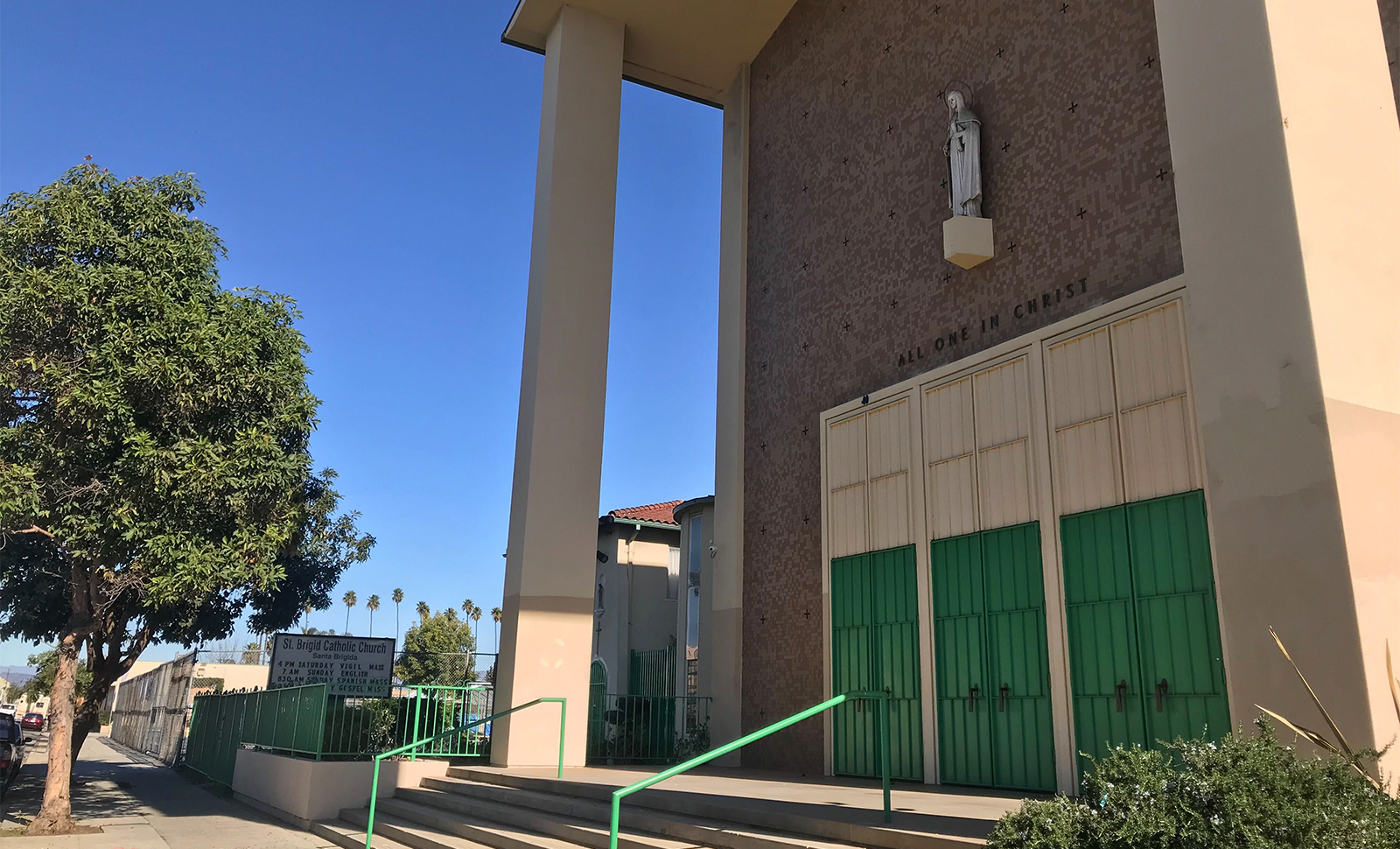 What used to be an Irish parish is now a predominantly Black and Latino congregation where, Keke told Religion News Service, parishioners take pride in their community and often “push me to do something … to fight more.”

“We need to liberate our people more,” Keke said they tell him. “It’s like everybody here is a freedom fighter.”

St. Brigid is an Afrocentric Catholic church in the Archdiocese of Los Angeles that’s overseen by the Josephites — a religious community of Catholic priests and brothers that centers its ministry in African American communities. The Josephites formed in 1871 to meet the needs of newly freed people after the Civil War.

The Josephites arrived at the South Central LA parish in the late 1970s and early 1980s, after African Americans had migrated to the city from Louisiana and Southeast Texas in search of jobs at aircraft construction companies, said the Rev. Thomas Frank, vicar general of the Josephites, who served as pastor at St. Brigid from 2007 to 2011.

Frank said the Josephites took over the parish at the written request of African American Catholics in the area. The church, which could accommodate about 800 people, was struggling with dwindling attendance and was down to about 150 core parishioners, who were mostly Black but also included a significant number of Latinos.

RELATED: Play about first African American priest in the US highlights current issues

With the Josephites’ arrival, the parish received its first African American priest, the Rev. William Norvell, as well as an Afro-Latino Jesuit priest, the Rev. Fernando Arizti, to connect with the Latino community, Frank said.

Hawkins came to St. Brigid around 1980 after her sister encouraged her to visit. She heard St. Brigid incorporated a gospel choir during Mass, and she thought, “A gospel choir at a Catholic church?” She decided to give St. Brigid a visit and has remained there ever since.

“The relevancy, the comfort of connecting in the community and the nuances of the actual Mass, it’s very culturally relatable,” Hawkins said.

During a typical pre-pandemic Mass, an ensemble wearing dashikis and headdresses would sound African drums to call parishioners to gather for worship. A gospel choir would follow, sending congregants to their feet as they danced and waved their arms, giving God praise, glory and honor. Inside the church, a Black crucifix is suspended above the altar. Oil paintings of a Black Joseph holding his son, a Black Jesus, and of Martin Luther King Jr. hang on the walls of the parish.

St. Brigid has become known as a pillar in the community.

It’s a member of OneLA, an organization made up of Jewish temples, schools and other nonprofit groups that work to improve housing insecurity, public transportation and criminal justice reform. The church also turns into a voting center during elections and during the coronavirus pandemic has served as a COVID-19 testing site. St. Brigid also has a food distribution ministry.

To Hawkins, the church community was an ideal and welcoming worship space for her four children.

She recalled how Arizti opened up the church space to a Muslim mosque whose building had been damaged after an earthquake.

“That was amazing,” Hawkins said. “The church was a light to the surrounding community.”

Seeing Gorman in the national spotlight now, Hawkins remembers how the poet’s mother went to the church with her twin daughters, Amanda and Gabrielle, with the hope of exposing her children to a Catholic faith “that was relevant to their identity as African American.”

The Gorman sisters were in middle school, became part of the religious education program and stayed throughout their preparation for baptism, first Communion and confirmation, Hawkins said. Amanda Gorman would participate in the church’s Black history programs through her poetry. 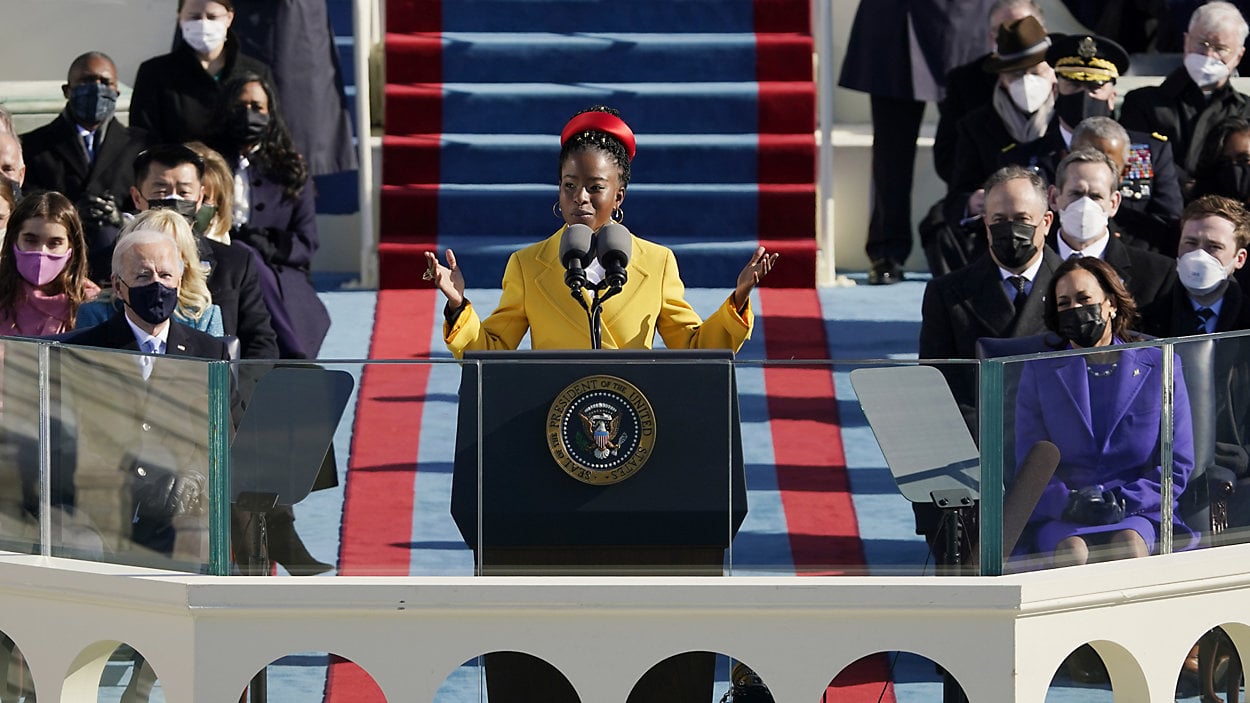 “Her mother was very intentional about her girls,” Hawkins said. “That was very clear, and as a result, her girls were very responsive to the African American worship experience.”

“This is a very humble family,” Hawkins added. “They’re a family that loves to share, but they are not imposing people.”

Gabrielle Gorman has made her own strides, in the filmmaking industry. Last year, she edited and directed a voting public service announcement, #Vote4theFuture, in collaboration with her sister, featuring self-taped clips from celebrities such as Oprah Winfrey, Cara Delevingne and Mahershala Ali. Her work, focusing on social change, has been featured in Essence, Bustle and NPR.

In a video created by Gabrielle Gorman, a graduate of UCLA’s School of Film and Television, the sisters deliver a message of solidarity with images of diverse people and protesters across the city of LA. The video shows Amanda Gorman reciting a poem in the bus and in the middle of protesters:

In the days leading up to Jan. 20, Keke said parishioners were calling him to let him know “their very own Amanda Gorman” would be the one reciting a poem at the momentous ceremony. Enthusiasm was high.

“Everybody was excited for the opportunity Amanda received,” Keke said. “There was no doubt that she would do well. She grew to become very articulate and bold.”

Reflecting back on Gorman’s inaugural poem, “The Hill We Climb,” Keke said it was about “democracy and unity,” and the importance of “living in the country as one people, recognizing one another and respecting one another.”

“That is the spirit of St. Brigid,” Keke said.