(RNS) — After more than 1,100 people received the coronavirus vaccine in the fellowship hall of a Black church in Oklahoma City, its pastor credited trust and teamwork for the accomplishment.

Organizers fell just 16 arms short of their goal as Pastor Derrick Scobey, the leader of Ebenezer Baptist Church, worked to make sure they could inoculate as many people as possible in the Black community where his church is located — even when they had some no-shows.

“We plugged in another 40 or so people that did not have appointments,” said Scobey, who said he was “ecstatic” about the outcome of the vaccination “pod” at his church building on Tuesday (Jan. 26).

“We got on the phone, texted and called pastors around the city probably the last hour of the day and just said if you do have anyone else 65 and older send me their name and their age and tell them to come now.”

RELATED: Faith and the COVID-19 vaccine: ‘Using the Black church to get the word out’

Across the country, Black faith leaders and other clergy of color are engaging in educational forums, videotaping themselves getting vaccinated and offering their church properties for vaccine distribution. Their efforts are underlined by research showing that people of color in the U.S. have died of COVID-19 at disproportionately higher rates than white Americans. 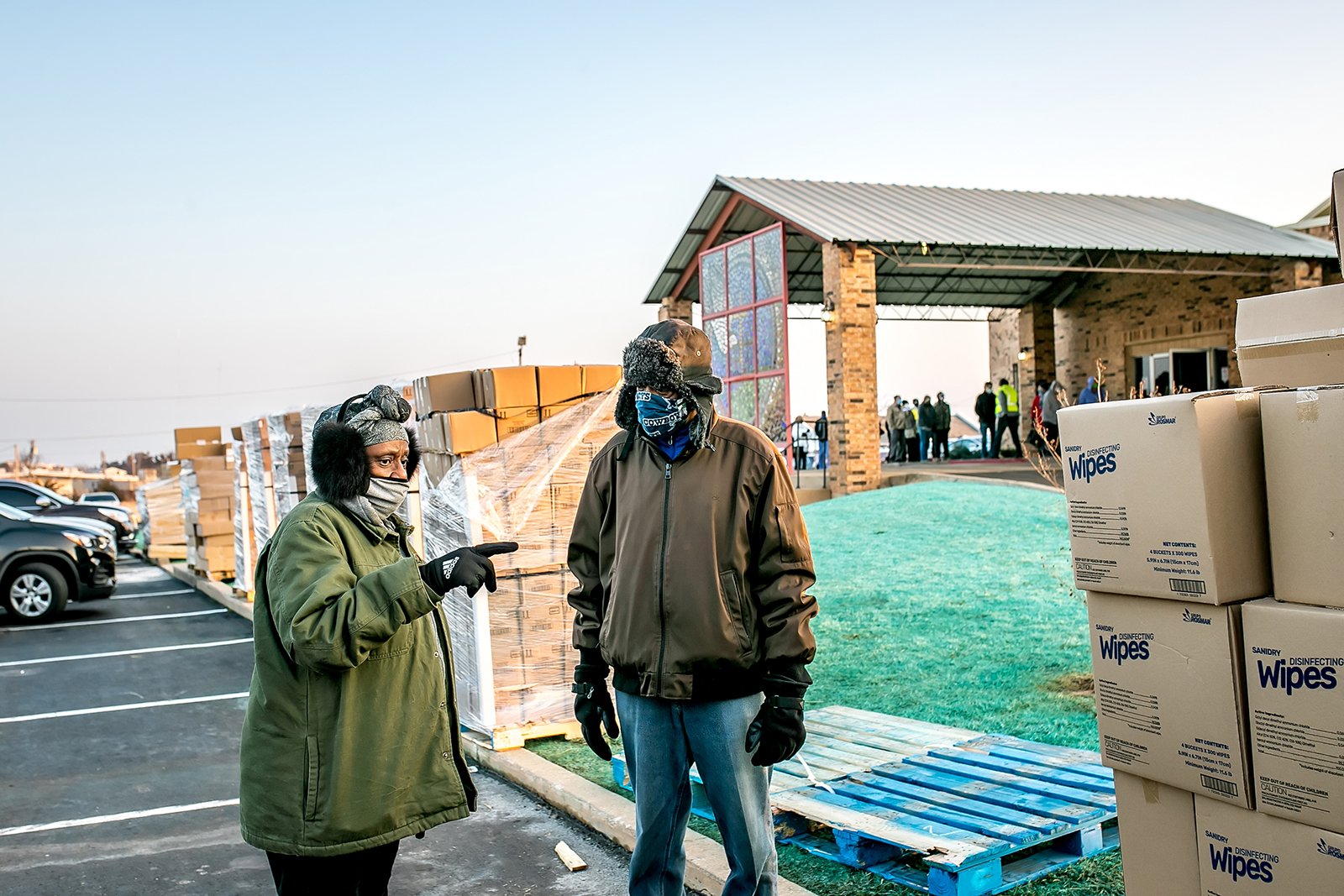 Scobey, whose church is affiliated with the National Baptist Convention of America, said the operation at his church came together in a matter of weeks, starting with a text from an executive of Integris Health, an Oklahoma City-based hospital network, and continued with cooperation from the Oklahoma City-County Health Department. Shots of the Pfizer vaccine were administered in the fellowship hall — after an early morning visit from the governor and the mayor — and the church’s classrooms became temporary offices for the health care workers.

So many people participated that the Church of the Living God next door offered space for the hundred or so volunteers to eat a lunch provided by a local insurance agency.

Efforts similar to the one in Oklahoma City are being offered by a range of religious groups across the country, including a recent joint proposal by leaders of the National Association of Evangelicals and the Orthodox Union, a Jewish organization.

But faith leaders have expressed particular concern about equitable vaccine distribution as Black and Latino Americans have been disproportionally sickened by COVID-19. They have also sought medical experts’ advice in online forums about how to conquer hesitation and fears among their congregants. The specter of the U.S. government’s past medical mistreatment and experimentation on African American patients, including during the decadeslong Tuskegee syphilis study, have played a role in some worshippers expressing doubt about getting the vaccine. 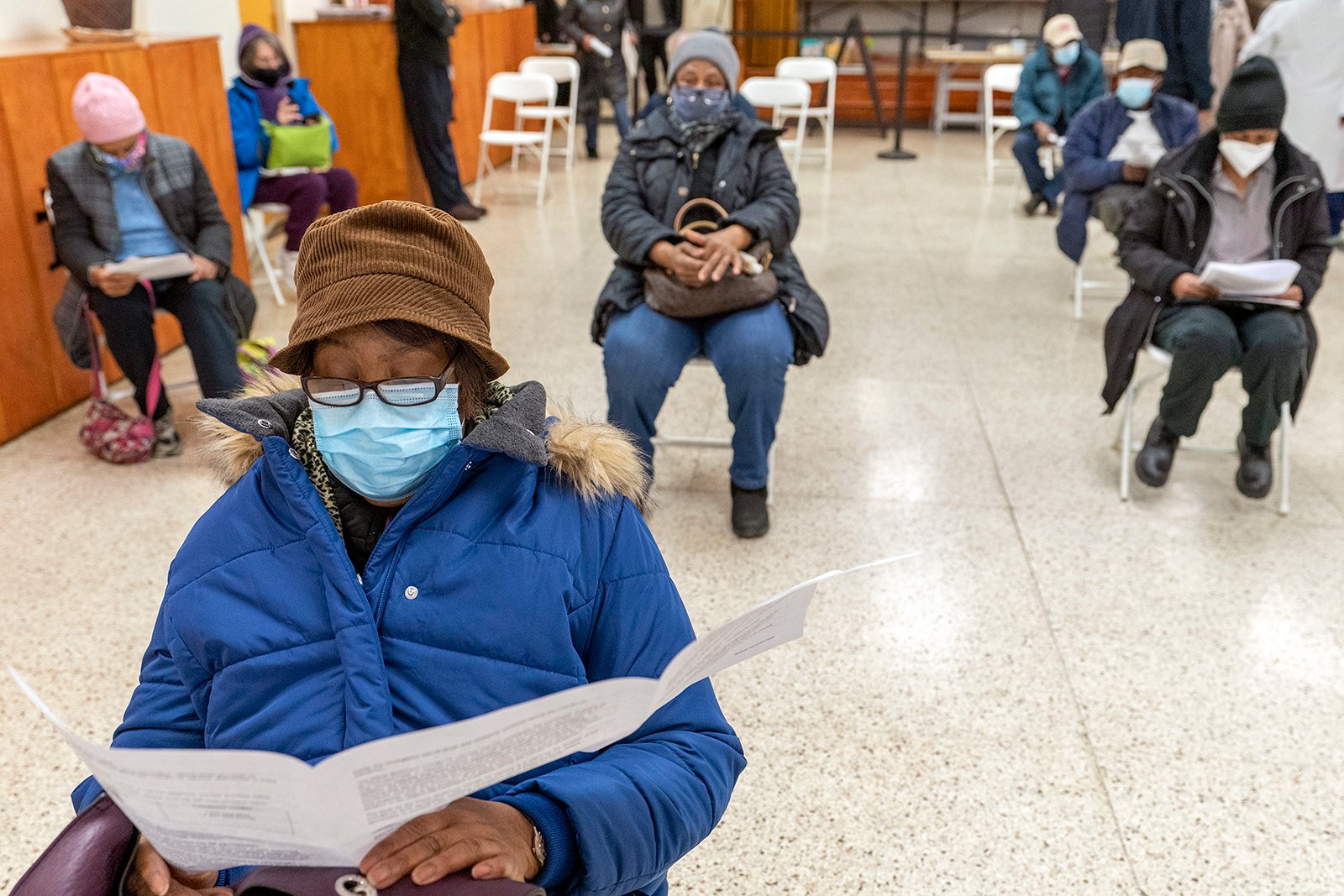 Elaine Chambers reads a coronavirus vaccination pamphlet while resting after receiving the first dose of the vaccine at a pop-up COVID-19 vaccination site at St. Luke’s Episcopal Church on Jan. 26, 2021, in the Bronx borough of New York. (AP Photo/Mary Altaffer)

Bishop Adam Jefferson Richardson, the leader of African Methodist Episcopal churches in Florida, said two AME churches, one in Tallahassee and another in Fort Lauderdale, were vaccination sites on Jan. 10. Between the two, he estimated that more than 1,000 people were vaccinated, the majority of them Black recipients.

A few days before, Richardson got vaccinated and announced it on Facebook, saying, “The vaccine, I believe, is the answer to prayer. Science and faith met and the world will benefit to mitigate the continued spread of a dangerous, deadly bully — COVID-19.”

Richardson said that he and his wife, a nurse practitioner, hoped publicizing their receipt of the Moderna vaccine would inspire others to take similar action. 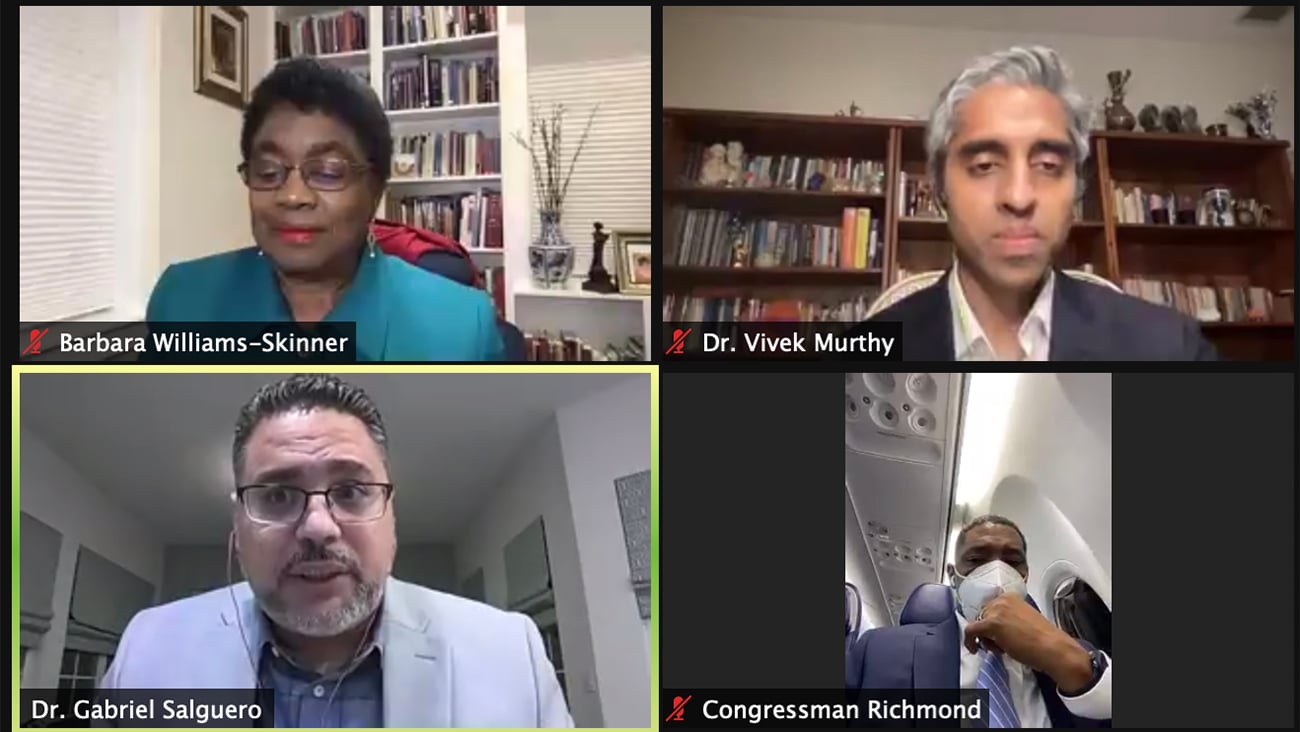 A week before President Joe Biden took office, U.S. surgeon general nominee Vivek Murthy spoke in an online conversation with clergy of color to dispel misinformation about the vaccine and strategize about providing access in harder-to-reach areas, such as communities with many immigrants and places that are “pharmacy deserts.”

Murthy acknowledged a “deep mistrust that has been sown over time partly as a result of a longstanding and deeper racism that many of us have seen in our own lives and experience. It has infiltrated medical research and led to the Tuskegee experiments, which many know, but others as well in the medical system and in the country at large.”

He said it’s time to confront that history and sought faith leaders’ assistance in rebuilding trust.

“We have to see it for what it is and figure out how to heal despite those offenses of the past, because in very literal ways our lives depend on that right now,” Murthy told the more than 1,000 people who joined the Zoom videoconference hosted by the Biden-Harris transition team.

A Baltimore pastor suggested using church parking lots in urban and rural settings for vaccinations in the same way some have been used for COVID-19 testing. Murthy called it “a fantastic idea.” 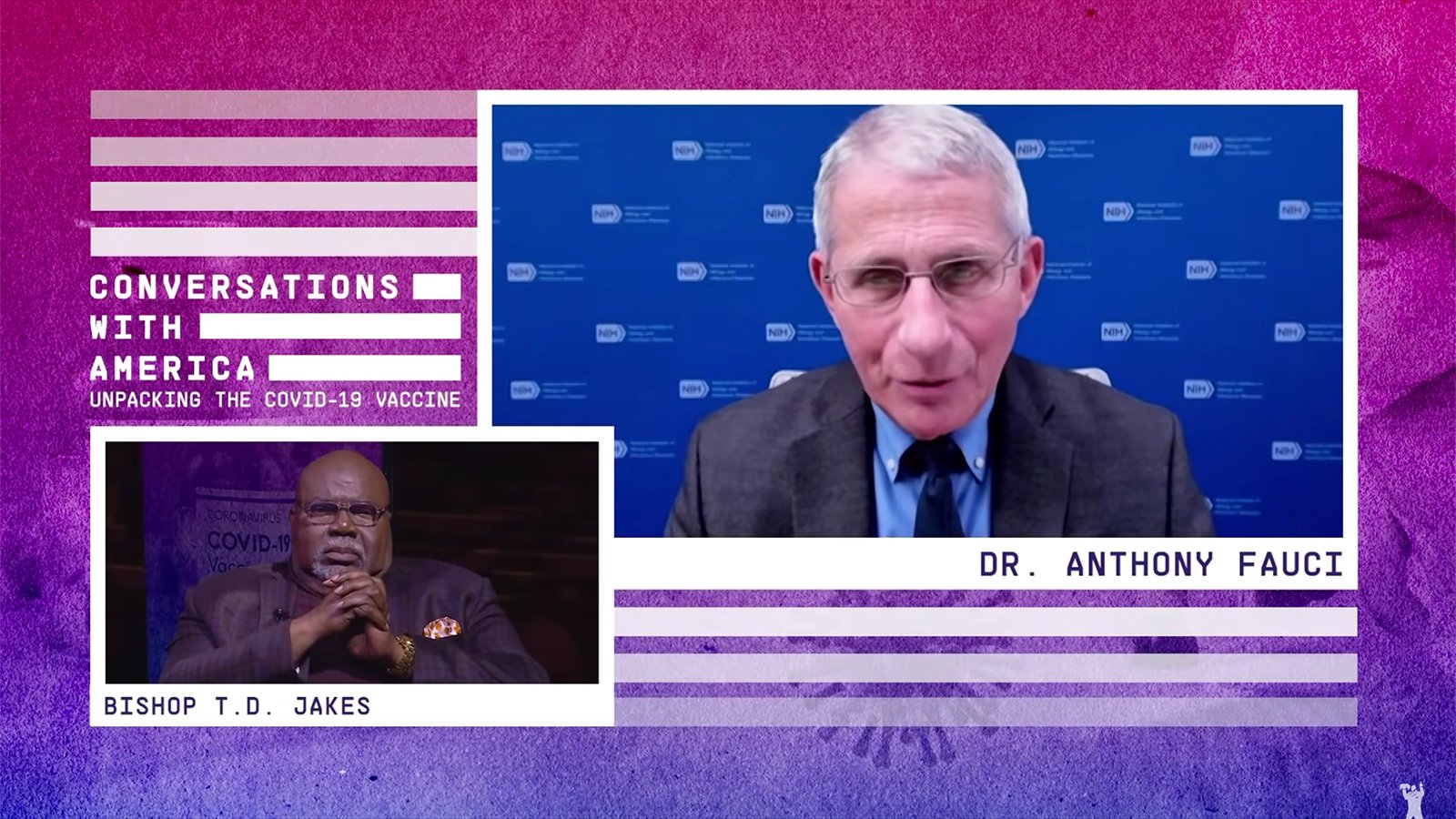 Dr. Anthony Fauci, who has been making the rounds virtually at various discussions with Black medical experts and Black clergy, has also endorsed the direct involvement of religious groups, among other possibilities, for vaccine distribution in communities of color, agreeing with Bishop T.D. Jakes at an “Unpacking the COVID-19 Vaccine” discussion released Monday on YouTube.

“You can do it by community centers,” said the director of the National Institute of Allergy and Infectious Diseases. “Church, as you mentioned, Bishop, is very important, faith-based organizations getting involved, but also mobile units to go out into those communities which are not readily accessible.”

Scobey, who has already put a version of those ideas into practice, said the successful turnout at his church was fueled in part by offering people a variety of ways to register. While some 300 of those inoculated used the state health department’s online vaccine registration portal, others used Signup Genius or called and texted, prompting people as old as 97 to show up.

He said Black people amounted to about 71 percent of those vaccinated during the daylong vaccination pod. According to Oklahoma Gov. Kevin Stitt, just 2 to 3 percent of African Americans in his state overall had received the vaccine. 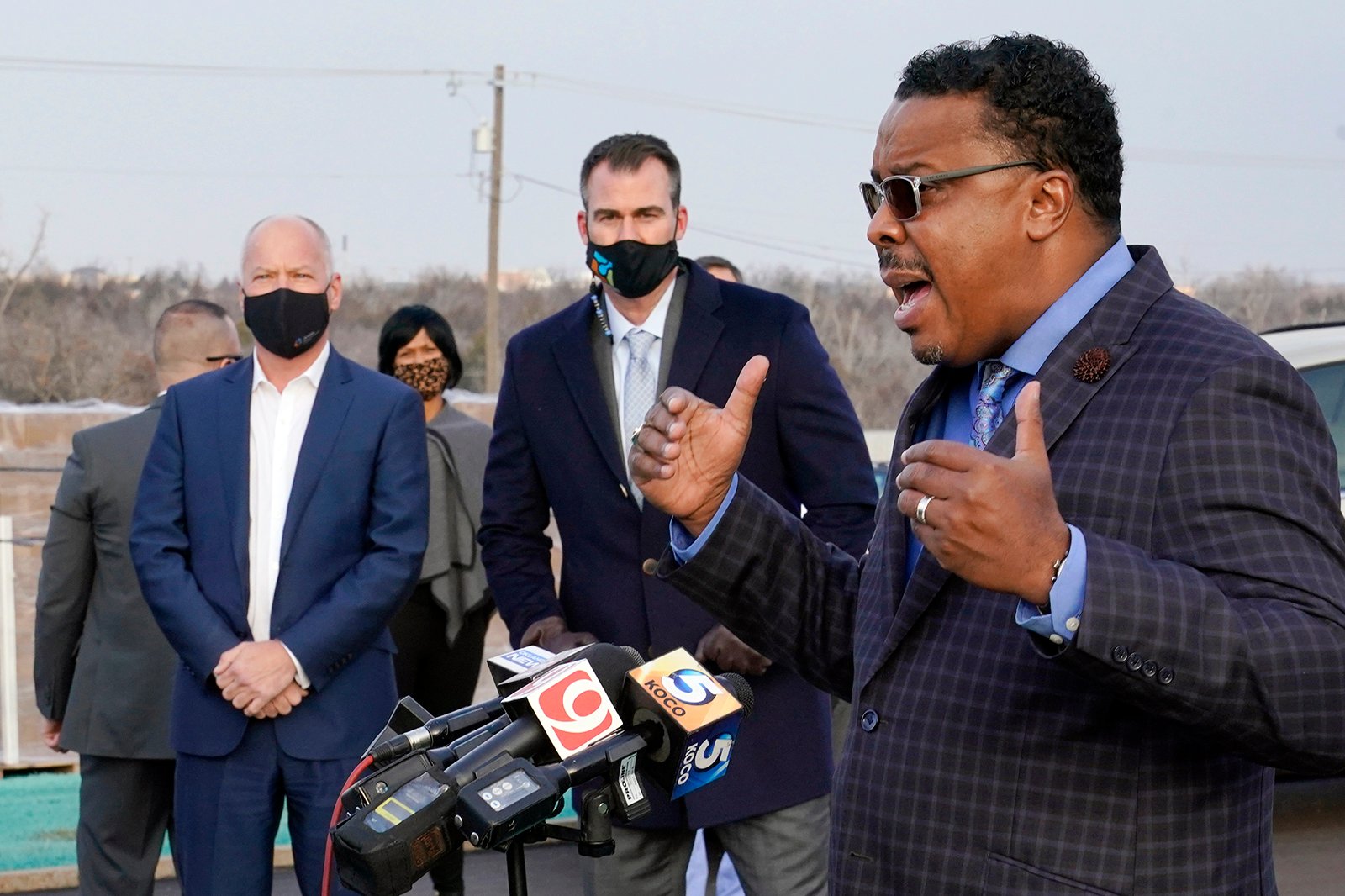 The church had already been reaching out to the community in other ways, giving out boxes of food donated by Christian relief organization World Vision to help people who lined up to receive assistance during the pandemic.

Scobey, who noted his church’s name, Ebenezer, is a biblical word that means “stone of help,” said the church and medical workers are preparing to provide the second of the two-part vaccine three weeks to the day from when the first shots were distributed.

“Who knows our community more than we do, and who does our community trust more than anyone?’’ he said, adding that he’s ready to recommend another Black pastor in his area whose church could serve as a future vaccination pod.

“There’s going to be a remnant of pastors that the people trust. Those are the people you have to tap into.” 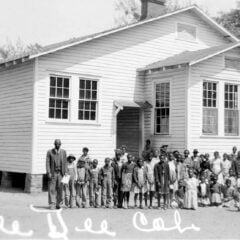