(RNS) — Organizers of the National Prayer Breakfast faced a number of challenges in pulling off the annual event in 2021.

An ongoing pandemic that forced the prayer breakfast online for the first time in its 69-year history. An insurrection at the Capitol followed by the second impeachment of Donald Trump. And a sense that religion divides Americans more than it unites them.

For Sen. Chris Coons of Delaware, one of the organizers of Thursday’s (Feb. 4) event, the prayer breakfast is still worth having. Prayer, he said, can allow people of different faith groups to see good in their fellow citizens, even across partisan divides, and focus on what people share in common.

It is also, he said, a chance for President Joe Biden to encourage Americans and people from around the world.

“Our country is in a challenging and difficult and divided moment and part of what President Biden brings to the needs of our nation at this moment is a deep compassion, a care and concern for his fellow Americans, and a personal life and story rooted in faith,” he told reporters during an online news conference Wednesday. President Joe Biden bows his head for a moment of silence during the 59th Presidential Inauguration at the U.S. Capitol in Washington on Jan. 20, 2021. (AP Photo/Carolyn Kaster)

The program for the annual event, held on the first Thursday in February, was recorded ahead of time due to the pandemic. It will be broadcast on C-SPAN starting at 8 a.m. Eastern. The event will also be streamed online at 2021nationalprayerbreakfast.org.

Biden will give an address. Former Atlanta Mayor and Ambassador Andrew Young will also speak at the event, which will be shorter than in years past.

In recent years, the annual God and country event has been controversial.

That’s in large part because the event has been put on since the 1950s by the Fellowship, a nonprofit also known as the Family and the International Foundation, with help from members of Congress. The group has been criticized for using religion as a means of advancing its political and social goals both in the United States and around the globe.

The bipartisan group has denied the idea that it is a Christian organization. Instead, it claims to be organized around the teachings of Jesus. 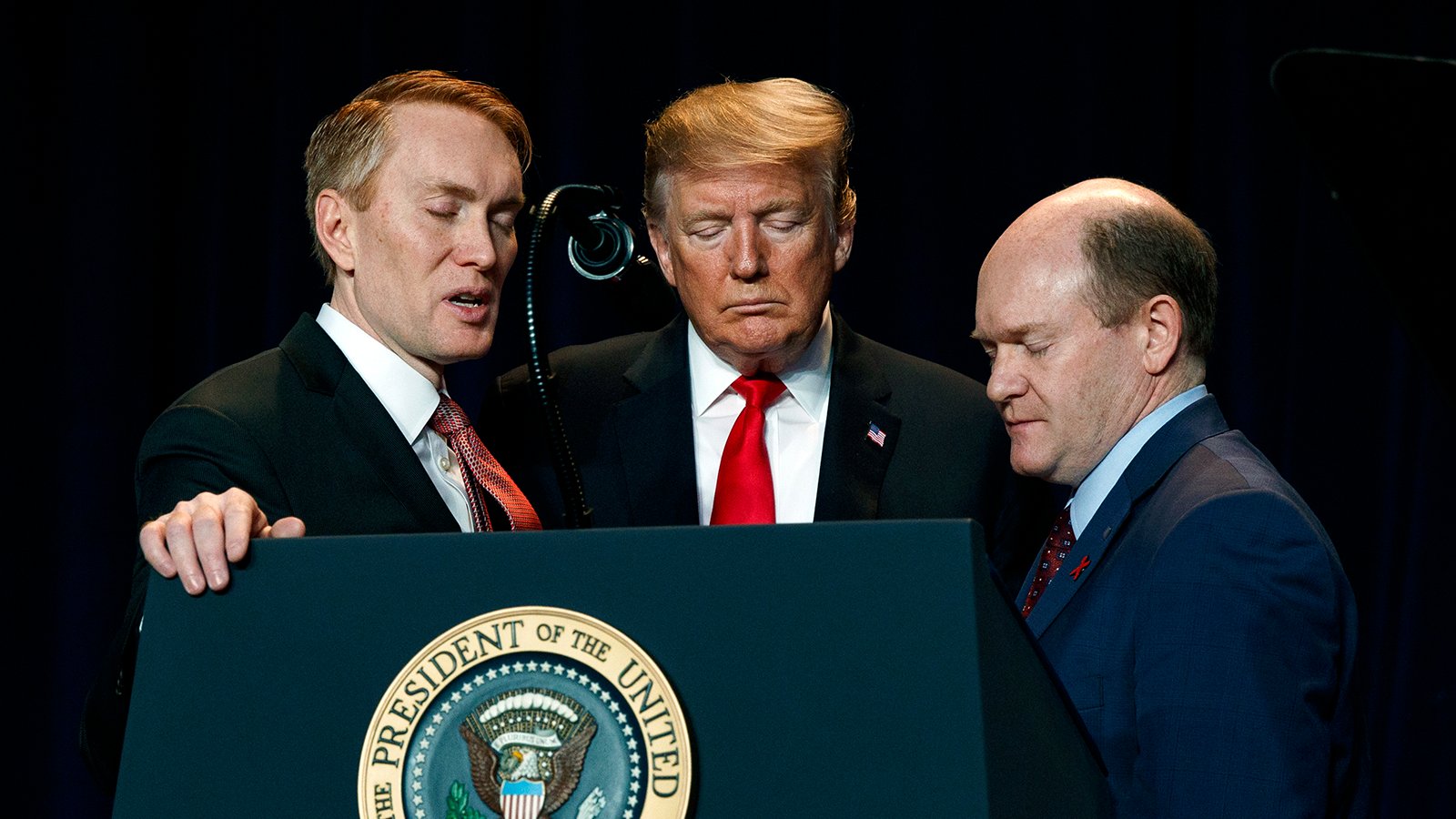 During the news conference, Coons defended the prayer breakfast, saying it was not an exclusively Christian event.

“This is not a Christian nationalist event,” he told reporters. “It is an event that recognizes the teachings of Jesus but is not in any way limited to Christians or Christianity.”

Coons also said Biden’s approach to religion as a source of comfort in hard times rather than a political force was the right approach for this year’s event.

“For millions and millions of Americans, their faith is a critical part of how they get through hard times,” he said. “We are in one of the hardest times in my lifetime. Thousands of Americans will die today from this pandemic. And most of them will die in pain and alone.”

The Delaware senator said the prayer event is often filled with moments of profound meaning. He pointed to closing remarks made by Congressman John Lewis at last year’s event. Lewis, who was battling the cancer that eventually killed him, gave the benediction by video at the 2020 event.

“We must believe in one another,” Lewis said. “We must never give up on our fellow human beings.” 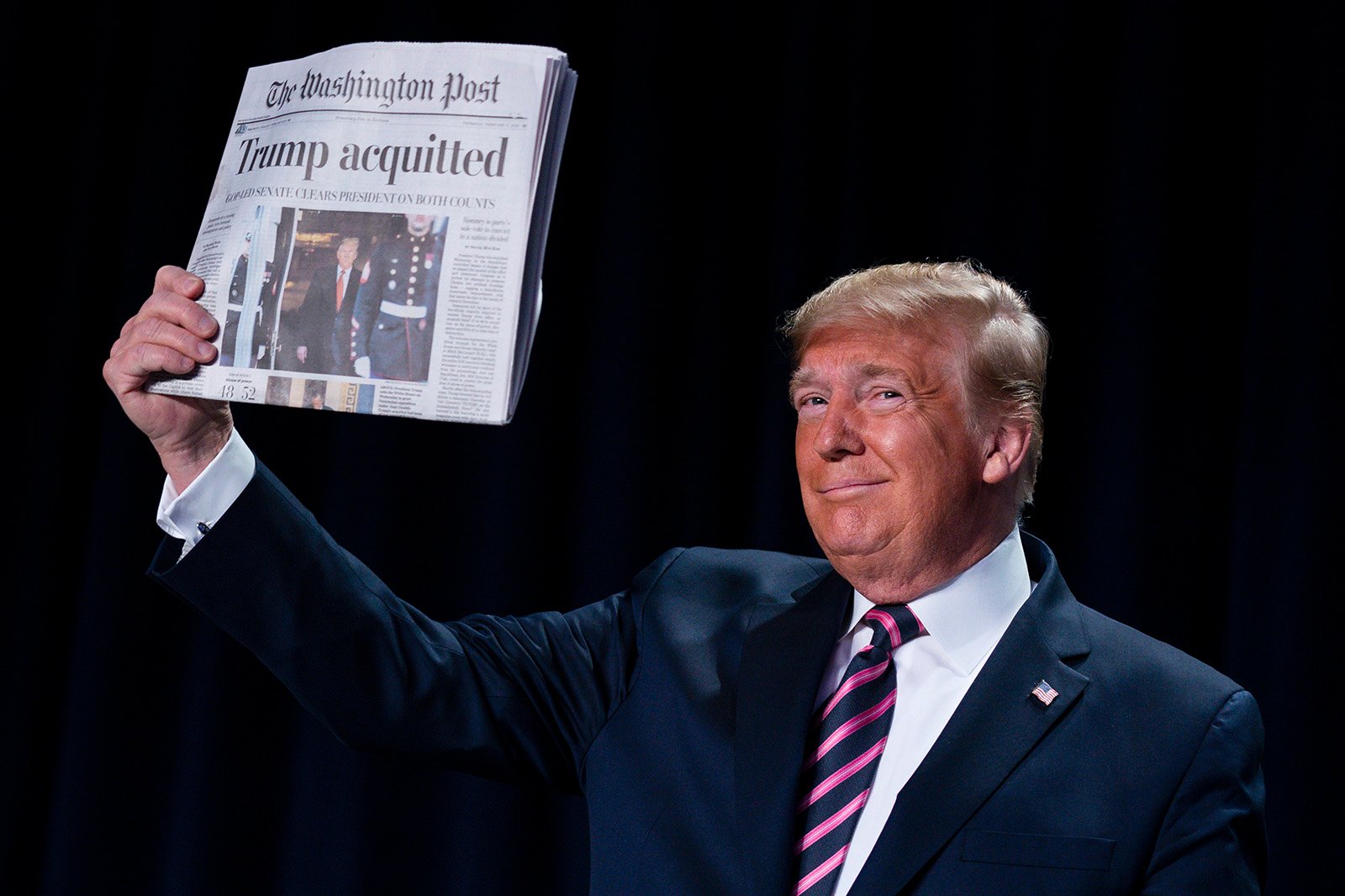 President Donald Trump holds up a newspaper with the headline that reads “Trump acquitted” during the 68th annual National Prayer Breakfast, at the Washington Hilton, on Feb. 6, 2020, in Washington. (AP Photo/ Evan Vucci)

The 2021 event, like last year’s, is overshadowed by impeachment. President Trump appeared at the 2020 prayer breakfast carrying a copy of The Washington Post with the headline “Trump acquitted” and took aim at his political foes during the event.

This year, Trump faces a second impeachment trial for allegedly inciting the Jan. 6 insurrection at the Capitol.

Coons said that anytime people gather for prayer there are mixed motives. Some are there to worship, some to make connections, some to show off a new outfit. And others come to witness to the power of faith.