(RNS) — There are no signs in front yards hailing the men and women who sometimes wryly call themselves “last responders.”

But for funeral directors across the country, like medical professionals, this has been a year like no other.

“There is no way to explain it,” said Stephen Kemp, 61, director of Kemp Funeral Home & Cremation Services of Southfield, Michigan, which borders Detroit. “I will never forget it as long as I live. In terms of sheer volume, it was surreal.”

In a normal month, Kemp estimates, he handles arrangements for about 30 bodies. In April, said Kemp, he did 152, mostly African American men. Now, even as his monthly toll has settled to about 40, he’s seeing people with comorbid conditions succumbing to the long-term effects of the disease.

RELATED: J. Dana Trent is on a mission to discuss death with the post-millennial generation 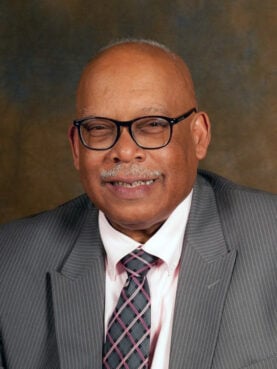 A member of a United Methodist Church, Kemp said that he couldn’t do what he does without spiritual support. “I consider what we do as a ministry. You have to be a person of faith.”

On the other hand, said Kemp, who is Black, there were times when he talked to God and asked, “Lord, what are you doing here? What message are you trying to tell us? Spiritually, it affected me. It just seemed like it (the virus) was killing our community.”

Less than an hour to the west in Ann Arbor, the numbers of infection were much lower than in the Detroit area, but the emotional toll was no less punishing. With distanced and virtual funerals, many families could not be with their loved ones as they died, due to restrictions on visitors at hospitals. “It was pretty difficult,” said Douglas “Dutch” Nie, who runs a funeral home founded by his parents. “We know how important it is to grieve as a community. Families were just at a loss.”

Francis X. Givnish, supervisor at Mauger-Givnish Funeral Home in Malvern, Pennsylvania, a Philadelphia suburb, said he’s painfully aware that, because of pandemic restrictions on hospital visitors, many didn’t have a chance to say a proper goodbye. “It’s a sad situation. Sometimes the next time a family sees their loved one is here.”

Givnish, 55, who comes from a family of funeral directors, said he also gets overwhelmed occasionally but he owes it to the people he’s serving not to show it. “You have to have a steady hand,” he said. “Because they are looking to you as a professional.” Instead, he asks God for “help for the families.” 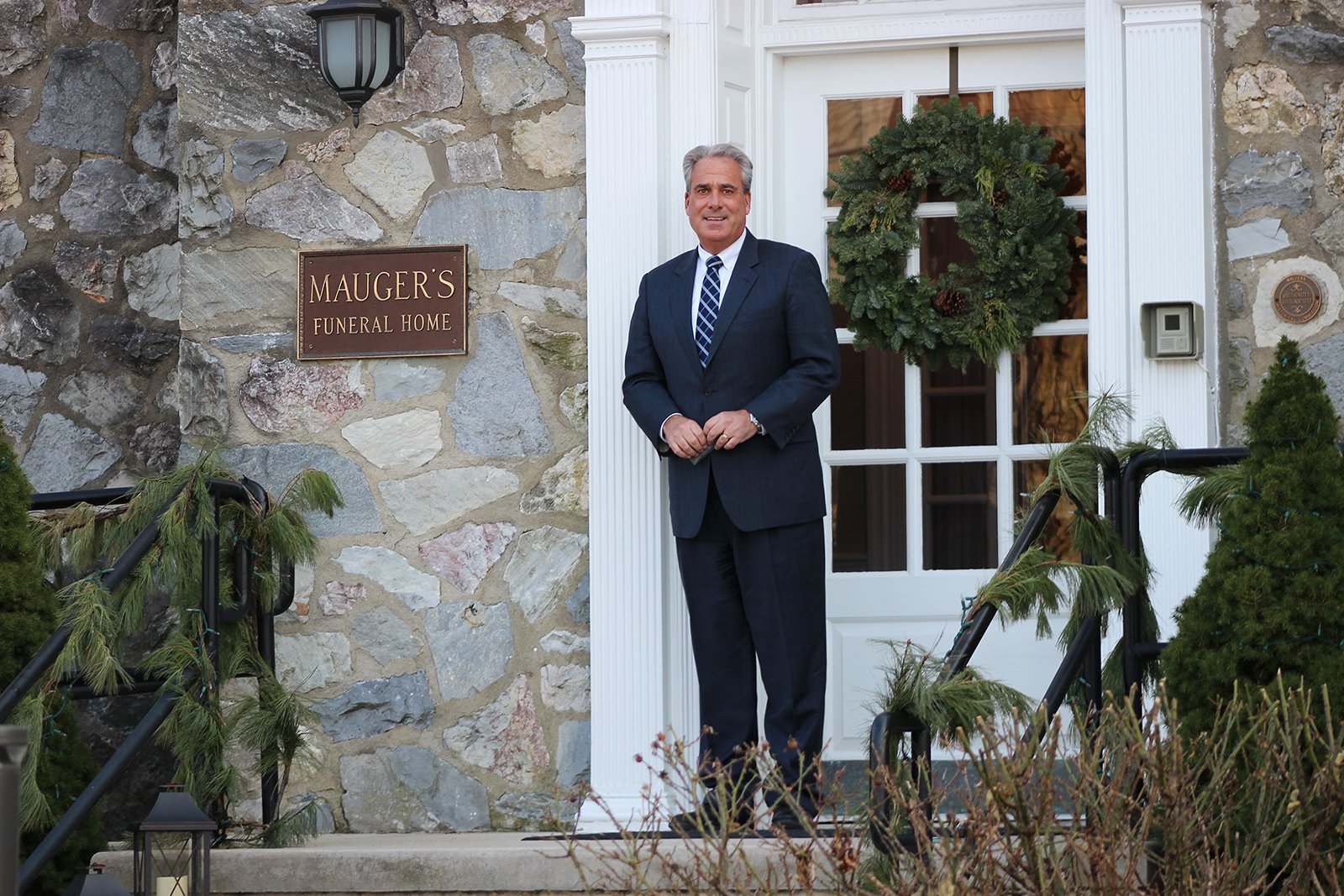 Nie is concerned for his staff as well as his clients. “They’ve got families and they’ve got fears,” he said. The labradoodle who normally visits with grieving families has been getting a lot of attention from employees, he said, “just dealing with the emotions they have.”

Nie currently serves as secretary to the National Funeral Directors Association, which produced resources to help funeral home staff and families through the pandemic. “There’s a saying in our industry that while wedding planners get six months, we get three days to plan a service.”

With safety considerations forcing families to delay memorials, opt for outdoor celebrations or move to online forums such as Zoom, “this year has kind of turned us into wedding planners,” Nie said.

But Nie’s staff members also tell him they are getting a higher amount of positive feedback from clients grateful for their resourcefulness. “Families just seem to be more appreciative of the efforts,” Nie said, “so that they feel fulfilled and, you know, that’s why they are doing what they are doing.” 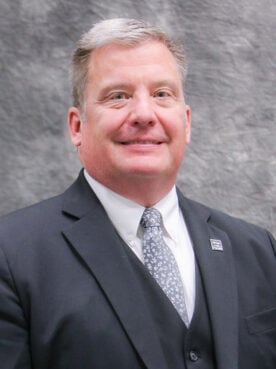 Nora Menkin, executive director of the People’s Memorial Association, a funeral industry consumer advocacy group in Washington state, said staff meetings at the funeral home run by her organization now include what Menkin calls “‘oh, poor baby’ time, when everyone can decompress.”

Before the pandemic, PMA created a “good news jar,” into which employees tossed notes about encouraging events and pulled them out and shared when needed. It has come in handy in the past 11 months. “We have so many wonderful people that we work with, and so many wonderful situations and stories, that we need to elevate them when the difficult stuff comes around,” Menkin said.

As they reflect on what they have learned from working during the almost yearlong crisis, the word that these funeral directors use again and again is “creative.”

“We do get asked, what would be normal in this situation,” said Menkin. ”But there is no normal, especially right now. It’s a lot of conversation about teasing out what’s important to the family.” 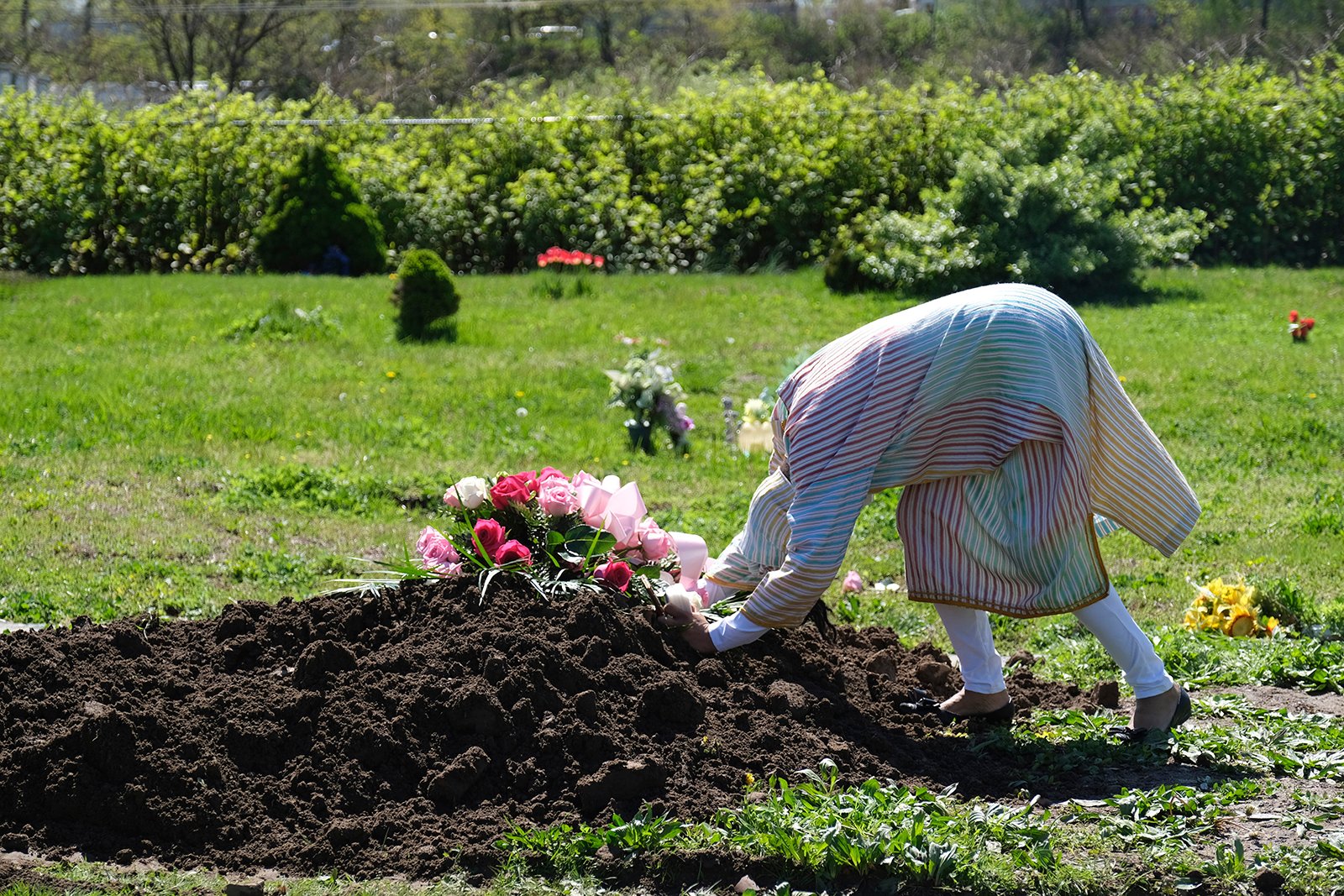 Erika Bermudez becomes emotional as she leans over the grave of her mother, Eudiana Smith, after she was buried in Bayview Cemetery, on May 2, 2020, in Jersey City, New Jersey. Bermudez was not allowed to approach the gravesite until after cemetery workers had buried her mother completely. Other members of the family and friends stayed in their cars. (AP Photo/Seth Wenig)

Though it’s hard to see any good coming out of tragedy, Amy Cunningham of New York’s Fitting Tribute Funeral Services, which specializes in green burials, said the pandemic’s one upside may be that it has reminded people that “thinking about the end of life is actually a healthy way to live, one that clarifies your mission on earth and helps you move forward.“ (Cunningham’s husband is a board member of the Religion News Foundation.)

That principle, she noted, is a tenet of world religions, including Buddhism, Judaism and Christianity.

While nobody wanted to think of death before the pandemic, “now I think it’s very clear to people that it’s really smart to have some thoughts on paper and commit a file into the hands of your family members,” she said.

Now, said Cunningham, she and her colleagues have time to spend at professional meetings comparing notes and asking: What part of that is good, and something we want to continue to do? What have we learned from this crisis about technology, Zoom, memorial events held remotely, streaming services? “In the end, there was no finer hour for funeral directors in New York City,” Cunningham said.

Navigating a cascade of practical difficulties while addressing the needs of grieving families took “a cool head and a kind of confidence you were doing the best you could,” said Cunningham.

At the same time, she said, “when you’re turning people away, you pick up the sorrow of the families. There was a cumulative despair among all of us. We’re educated and wired to be as helpful as we can be and give people meaningful experiences. Many of us felt we were failing because we couldn’t do enough, fast enough.”

A journalist before getting her funeral director’s license in her mid-50s, Cunningham, now 65, said that though she could not have anticipated the enormous amount of suffering and loss of the past 10 months, she realized that “spiritually, as well as academically, maybe I was in the right place at that right time, and that everything I’ve learned has led me to this point.

“Now I feel like I’m exactly where I want to be, as hard as this is.”