(RNS) — Paintings by former British Prime Minister Winston Churchill of St. Paul’s Cathedral in London and the Koutoubia Mosque in Marrakech, Morocco, will be put on sale by one of the world’s leading auction houses.

“Tower of the Koutoubia Mosque” is the better known of the two religious-themed paintings on offer and has had several owners over the years. Currently owned by the actor Angelina Jolie, the painting was originally intended as a gift from Churchill to President Franklin Delano Roosevelt after the two Allied leaders visited Morocco for relaxation during World War II. It is Churchill’s only wartime painting. 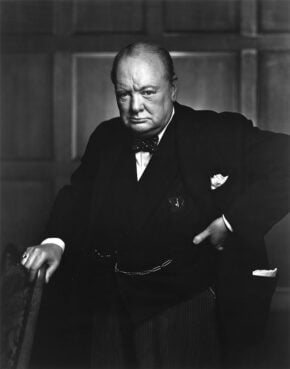 The painting portrays the old city of Marrakech, and many of its Islamic monuments, including the mosque, are in the background while the sun sets over the snow-capped Atlas Mountains behind them.

Koutoubia Mosque is the largest mosque in Marrakech and dates to 1147. The current structure dates to 1158 with the minaret — through the famed minaret that features in Churchill’s painting was not completed until 1195.

Churchill and FDR arrived in the city on Jan. 23, 1943, while in Morocco for the Casablanca Conference. That evening Churchill made special arrangements to watch the sunset over the mountains and the Koutoubia Mosque from a tower in the Villa Taylor, where the party stayed according to an account from American vice consul Kenneth Pendar.  The mosque’s muezzin let out the call to prayer as the fading sunset turned the Atlas Mountains behind the scene first pink and later purple. Pendar’s account also notes that mosques in the city also flashed electric lights to signal the sunset prayer.

According to those in attendance, it was a memorable and spiritually moving moment. FDR returned to the United States the next day but Churchill lingered for another day and completed a sunset painting of scene over the mosque as a gift for FDR.

Historians have long cited Churchill’s largely negative views toward Islam, but in the past decade some have claimed his views were more nuanced. In his 2015 book, “Churchill and the Islamic World,” Warren Dockter revealed a 1907 letter in which a member of Churchill’s family warned him not to convert to Islam, apparently responding to his interest in the Muslim world after being posted to northwest India.

In 1940, at the height of the war, the British prime minister set aside funds for the London Central Mosque as part of a strategy to appeal to Muslims in the British Empire. In India, Churchill and the British Raj often preferred to work with South Asian Muslims at the expense of Hindus.

Churchill first visited Marrakech, which he billed as the “Paris of the Sahara,” in 1935 at the suggestion of his art teacher and fell in love with Morocco. He would make another wartime visit to Marrakech in 1944. Churchill returned for a longer stay in Marrakech in 1947, spending five weeks at the Mamounia Hotel while working on his memoir. 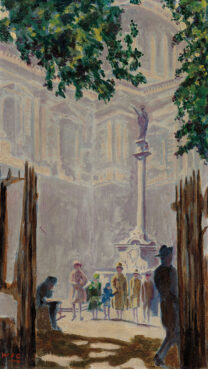 An earlier work of Churchill’s that features a rural scene in Marrakech and that was given as a gift to Gen. Bernard Law Montgomery in the 1950s will also be auctioned by Christie’s.

RELATED: Pandemic reshapes worship across the UK’s many faiths

The 1927 painting of the churchyard of St. Paul’s Cathedral was painted while Churchill, then chancellor of the exchequer, was a guest of King George and Queen Mary’s at their estate in Balmoral, Scotland. The king later directed the painting to be sold in a charity auction and it has belonged to the buyer’s family ever since.

Churchill, who once compared his own religious beliefs to a cathedral’s flying buttresses, ordered St. Paul’s be protected during World War II “no matter the cost.” Upon his death in 1965, Churchill’s body was allowed to lie in state, an honor normally reserved for a British monarch and head of the Anglican Church.