(RNS) — If there’s one thing the pandemic has made clear to theologian, psychologist and professor Chanequa Walker-Barnes, it’s this: Giving something up doesn’t necessarily draw one closer to God or to others.

It’s a common practice during Lent, the season of prayer and penitence many Christians observe in preparation for Easter.

But since lockdowns aimed at slowing the spread of COVID-19 began 11 months ago in the middle of the last Lenten season, people have given up a lot — and for much longer than 40 days. For many, that has included seeing friends and family or going to work, school or worship in person, among other things. 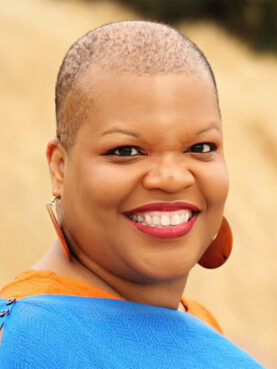 But, Walker-Barnes told Religion News Service, “We haven’t necessarily drawn closer to God or to each other, right? We’re polarized like crazy.”

So as Lent begins again on Wednesday (Feb. 17), she is taking something on instead.

She is spending 40 days deepening her self-care practice and inviting others to join her on Instagram and on her blog for the Resurrecting Self-Care Challenge.

“It’s an invitation to be subversive by focusing on ourselves,” said Walker-Barnes, professor of practical theology at Mercer University.

As a womanist theologian and author of “I Bring the Voices of My People: A Womanist Vision for Racial Reconciliation” and “Too Heavy a Yoke: Black Women and the Burden of Strength,” Walker-Barnes said she doesn’t view Lent as a time to experience Jesus’ suffering in the days leading up to Holy Week, when Christians remember his death, and Easter, when they remember his resurrection.

Instead, it’s a time to draw closer to God and who God wants her to be as a disciple and as a minister. She chooses practices each year she hopes will move her toward that goal — and often, they turn out to be self-care practices, she said.

That’s because self-care is about the practices that help people live into who God wants them to be, according to the theologian.

“I think for me it’s about really being intentional about thinking about who God wants us to be, and I believe God is a God of joy,” she said.

The Resurrecting Self-Care Challenge will include a new self-care practice each weekday morning — either an idea to consider or an action to take — on weekly themes: Reimagining Self-Care, Self-Care Basics, Self-Compassion, Balance and Boundaries, Finding Your Joy, Prioritizing Self-Care and Solace in Silence. It also will include a “deeper, reflective” practice for each weekend.

“It’s really an opportunity to deepen our practices and try to make them more consistent, as well as to kind of try on some things that we may not have tried before that maybe we don’t do enough,” she said.

On Wednesday, Walker-Barnes kicked off the challenge by dispelling the idea that self-care is selfish.

It’s not “counter to the suffering of Christ” or the “enemy of the collective good,” she wrote. It isn’t something you buy or someplace you visit.

It’s an act of stewardship, she contended.

The theologian recounted a parable Jesus told in which a wealthy man gives three servants some money to steward while he is gone. The two given the most money had invested it and made more. The third had stored it away for safekeeping and made none.

“Our ‘self’ is God’s first and greatest gift to each one of us. How we care for ourselves, then, is our response of gratitude for that gift,” she wrote. 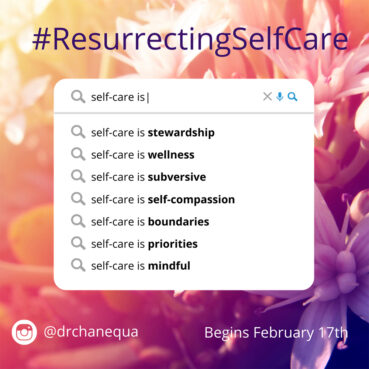 Walker-Barnes said she plans to practice that along with everybody else.

“I think, no matter where you are, self-care is this thing that none of us ever gets great at, especially women,” she said.

“Women in particular, from the time we are very young as girls, are taught to sacrifice ourselves for other people. Many of us are not taught to take care of ourselves, and we may be taught to neglect ourselves. For us to then focus on ourselves and take up habits that encourage us to take on a focus on ourselves is subversive in some ways, if we really think about what it means to be healthy and whole.”