(RNS) — I confess I have long labored, with some hesitation and much annoyance, to embrace the Christian concept of original sin. Which makes it odd, I’ll admit, that I am so drawn to Ash Wednesday, the day in the Christian calendar that most reminds us that sin — or at least human finitude — is the central problem that Christianity exists to solve.

Ash Wednesday inaugurates the holy season of Lent, a period of 40 days before Easter modeled after the 40 days Jesus spent being tempted in the desert between his baptism and the beginning of his public ministry.

While other lapsed or nominal Christians often find their way to Easter or Christmas services, I am as likely to find myself on a church pew on a weekday evening in the cold of February. Something about the sparseness of the room and the simple truth of the liturgy resonates with me. It both invites and taunts: Until you accept this part, none of the rest makes any sense.

RELATED: No touching! Churches get ready for Ash Wednesday in a pandemic

The Ash Wednesday Scripture readings show Lent to be a most richly and profoundly biblical Christian practice. The liturgy includes a reading of the penitential 51st Psalm, traditionally understood to reflect David’s contrition over his sin with Bathsheba. As Lent emphasizes penitence and self-denial, the New Testament reading, from the Gospel of Matthew, is Jesus’ warning against people who practice devotion in public view: “Take heed that ye do not do your alms before men, to be seen of them.”

If my love for Ash Wednesday is out of sorts with my theology, it’s just as odd to me that Calvinists and other low-church evangelicals, who loudly claim the doctrine of total depravity — the notion that original sin left humanity utterly unable to seek the good — find no biblical warrant for Lent at all.

The most devoted adherents of total depravity comically and illogically overemphasize the wickedness of themselves and others, even innocent children. The most extreme caricature of this view is “worm theology,” which posits that the only proper response to God’s perfect holiness is a very low view of the human self.

At the other extreme, in the precincts of mainline and liberal Protestantism that provided my theological formation, the believers have always seemed uncomfortable, if not ashamed, of the notion of sin. As long as we had good intentions and supported the right causes, sin was not something to worry much about — unless, of course, the sin in question was a kind of collective, societal injustice. 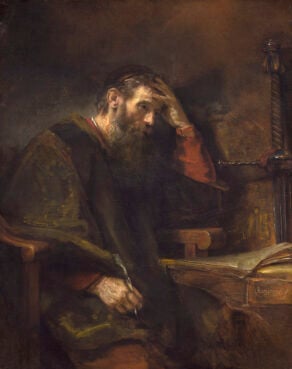 “The Apostle Paul” by Rembrandt van Rijn, circa 1657. Image courtesy of the Widener Collection/National Gallery of Art/Creative Commons

Between the two poles of sin-obsessed and sin-averse stands St. Paul, whose anguished discourse on his own sin, in his letter to the Romans, ends with him exclaiming, “O wretched man that I am!”

Despite his wretchedness, however, Paul “would be suspicious of a teaching and a preaching which pretended that the only door into the church was that of evermore introspective awareness of sin and guilt,” as Harvard theologian Krister Stendahl put it in a seminal 1963 article, “The Apostle Paul and the Introspective Conscience of the West.”

Stendahl reminds us that Protestants read Paul with Lutheran or Calvinistic eyes (or both), and that the tortured, obsessively examined soul is a “Western development and a Western plague” that “reached its theological climax and explosion in the Reformation and its secular climax and explosion in Sigmund Freud. But Paul himself was never involved in this pursuit.”

For me, the door into the church is often music, and one of the most breathtaking sacred choral works ever composed invites the mind into the spirit of Ash Wednesday. The Renaissance composer Gregorio Allegri wrote a setting of Psalm 51 (“Miserere mei, Deus”) during the reign of Pope Urban VIII in the 1630s.

It was so beautiful that for decades it was only allowed to be performed inside the Sistine Chapel on Ash Wednesday. Even transcribing it was forbidden. Eventually, the piece spread throughout Christendom and is well loved around the world.

The mere existence of art like Allegri’s “Miserere mei, Deus” is enough to dismiss the doctrine of total depravity, or at least the worst aspects of worm theology. After all, God made mankind in his own image. Even if we do not share in the divine self, we can at least point toward him through art, literature, and acts of charity and devotion.

RELATED: Celebrating Ash Wednesday in a pandemic? There’s an app for that

Ash Wednesday offers an opportunity for the devout, the skeptical and the merely curious to embrace the reality of sin-nature in the context of the broader drama of salvation. The holy day stands in the calendar as something that is at once timeless, countercultural and always needed.

In a just world, all worshippers could hear the soaring tones of Allegri’s “Miserere mei, Deus” in church at the beginning of Lent. But even in this present, fallen age, every penitent heart can hear and contemplate the message and mystery of Ash Wednesday: Dust thou art, and unto dust shalt thou return.

(Jacob Lupfer is a writer and political strategist based in Baltimore. The views expressed in this commentary do not necessarily reflect those of Religion News Service.) 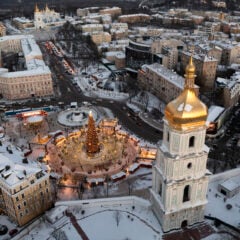 Faith
War at Lent: How Ukraine could reshape how we think about Christian unity 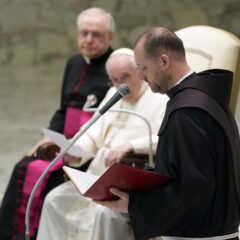