(RNS) — Olga Marina Segura has often been asked why she’s chosen to remain involved in the Catholic Church, an institution that, in her eyes, has often ignored the trauma of Black people.

Segura, a journalist who’s built her career in Catholic media, has asked herself that same question: Why did she attach her identity to such an institution?

As a journalist, Segura has covered race and culture, studying and interviewing leaders like Alicia Garza, co-founder of Black Lives Matter, and mothers of young Black men killed by police, highlighting the role their faith has played in both grief and activism. She’s written about the Catholic faith of activists like Tarana Burke, the founder of the #MeToo movement, whose Catholicism was a place to “gauge how to exist in the world.”

Through her reporting, Segura, 31, an opinion editor at National Catholic Reporter, has realized her faith has given her the language to talk about “why every person mattered” and “why God called us to care for the planet.”

RELATED: At Amanda Gorman’s Black Catholic LA parish, ‘it’s like everybody here is a freedom fighter’

And in her recently released book, “Birth of a Movement: Black Lives Matter and the Catholic Church,” Segura highlights the urgency for Catholic leadership, such as the United States Conference of Catholic Bishops, to reject systemic oppression and engage in dialogue with the co-founders of the Black Lives Matter movement. To Segura, who wrote the book amid the disproportionate spread of COVID-19 and the uprising over the police killing of George Floyd, these matters are urgent. 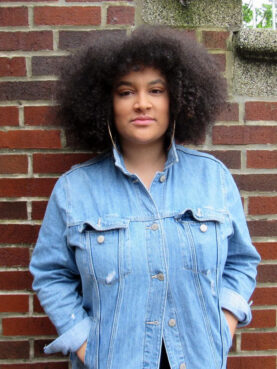 If the Catholic Church doesn’t do more to engage with Black Lives Matter, “the future of our church is at stake,” Segura told Religion News Service.

“Black and brown people do not feel at home in this church, especially young people,” said Segura, an immigrant from the Dominican Republic.

Young people, whom Segura referred to as the Trayvon Martin generation, “think about these things more radically and they want to see a church that reflects that.”

Segura got her start as a professional journalist at America, an esteemed Jesuit magazine, where she immersed herself in learning about Catholic church history, familiarizing herself with papal documents and bishops statements on issues like racism.

In her book, she underscores “Laudato si’,” the second encyclical of Pope Francis, where he highlighted the risk of “rampant individualism” and detailed how many of society’s problems are “connected with today’s self-centered culture.” She notes that in 2018, the USCCB published its first pastoral letter on racism since 1979, titled “Open Wide Our Hearts,” where it noted that even after slavery was abolished, many freed Black Americans were forced into “continued servitude in the evolving economies.”

This knowledge helped Segura make a clear comparison between Catholic social teaching and the mission of the Black Lives Matter movement. To Segura, these doctrines carry similarities.

For example, the mission of Black Lives Matter and the pope’s encyclical “focused on social issues and called on us to reject the very individualism that was creating the problems we had to combat. Both challenged a world that was different from the oppressive one I knew,” she wrote.

The “Open Wide Our Heart” letter, Segura wrote, “calls on all Catholics, regardless of race, to work toward the eradication of racism in the United States.”

The way Segura sees it, “Black Lives Matter is not a movement pushing an extremist agenda that contradicts our faith; it is the secular version of our Catholic social teaching.”

However, these statements from the church are limited, she said.

“The only explicit mention of gender in the entire document is used to negate the very existence of transgender women, men, and children around the world,” Segura wrote about the pope’s encyclical. 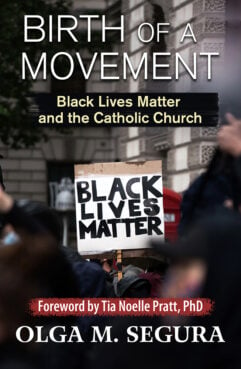 Unlike the church, the co-founders of Black Lives Matter — Garza, Patrisse Cullors and Opal Tometi — “promote a movement that centers the lived experiences of those our church would rather ignore,” Segura details in her book.

As a journalist, Segura has seen how Black Lives Matter co-founders have been maligned for “denigrating religion,” while the movement has been described as “atheist” and “violent.” Segura sets the record straight by featuring the religious upbringings of the movement’s leaders.

While Cullors was raised Jehovah’s Witness, Segura wrote that she moved away from her faith and identifies as “spiritually always seeking.” The work of Tometi, who is Christian, has been influenced by liberation theology, a movement in Christianity, Segura noted.

“These Black female leaders, unlike the predominantly white, all-male bishops who oversee the U.S. Catholic Church, are genuine examples of Christian leadership,” she wrote. “Like Christ, the founders fight for the marginalized, advocate for peace and justice, and work to dismantle oppressive systems.”

In her book, Segura urges the church to stand against white supremacy and to campaign for “defunding and demilitarizing law enforcement.” She envisions a “liberated and resurrected church.” These calls, to many, might seem too hefty. Segura offers practical first steps.

She said the USCCB could conduct a survey on Google Forums or Survey Monkey to ask Black Catholics about topics they would like bishops to address. These suggestions could range from homilies on white privilege to pastoral letters on police brutality.

Also, Segura said, the USCCB can create a website for the Ad Hoc Committee Against Racism so Catholics can see the ongoing work of the anti-racism group. And, she added, Pope Francis should call for and attend a gathering in the U.S. to encourage bishops to address the issue of race.

Segura recognizes regular day-to-day Catholics may not place much importance on what the bishops have to say. However, she said, it’s important to challenge bishops with power who have access to Catholics with money.

“If they started to challenge those people who they associate with, that’s where I think we really would start seeing the change,” she said. “They have access to spaces and power that I will never have as an immigrant woman in this church.”

Segura said she hopes her book helps Catholics as well as people outside the church realize “it’s OK to get involved in the struggle for liberation at any point in your faith journey.”

“I hope that people are not afraid … to push our church past where it can really go,” she said.