(RNS) — More than five decades after he was gunned down at age 39 in Harlem’s Audubon Ballroom in an apparent effort to silence him, Malcolm X has retained his voice in American culture. In an era of “Muslim bans” and the killing of George Floyd by a police officer, El-Hajj Malik el-Shabazz, as he was called at his death in February of 1965, remains an influential figure in pop culture, political activism and among American Muslims.

The Muslim minister and activist’s most recent flare into public consciousness comes with the film “One Night in Miami,” in which Muhammad Ali, R&B singer Sam Cooke, NFL star Jim Brown and Malcolm X (played by Kingsley Ben-Adir) engage in an imagined all-night hang. A biography released last year, “The Dead Are Arising: The Life of Malcolm X,” presents 30 years of deep research by Pulitzer Prize-winning journalist Les Payne and his daughter Tamara Payne, who finished the book after her father died in 2018.

With that investigation ongoing, representatives of Malcolm X’s family released a letter this week written by New York City Police Officer Raymond Wood claiming that there was a larger official conspiracy behind the shooting.

Three men were tried and convicted for Malcolm X’s murder, but the lack of physical evidence in the case and conflicting accounts from witnesses have cast doubt on those convictions.

On Sunday (Feb. 21), civil rights attorney Benjamin Crump held a press conference in New York with three of Malcolm X’s daughters to announce the existence of the letter Wood wrote before his death in November implicating the FBI and NYPD in the events at the Audubon Ballroom.

RELATED: The Islamic history behind the George Floyd protests

Over a year prior to his assassination, Malcolm X began to recast his struggle for freedom and racial justice for Black Americans into a pursuit of global human rights. As he wrote (with Alex Haley) in his autobiography, Malcolm X’s experience of the hajj to Mecca showed him the possibilities of interracial harmony. In a letter he wrote from Mecca, X explained:

There were tens of thousands of pilgrims, from all over the world. They were of all colors, from blue-eyed blondes to black-skinned Africans. But we were all participating in the same ritual, displaying a spirit of unity and brotherhood that my experiences in America had led me to believe never could exist between the white and the non-white.

These experiences were reinforced by subsequent travel to Egypt, Sudan, Lebanon, Morocco and other Muslim majority countries. Upon his return, Malcolm X channeled his efforts into founding the Organization of Afro-American Unity to be a bridge between the African American community and Africa. It was this organization he was addressing the day of his assassination. 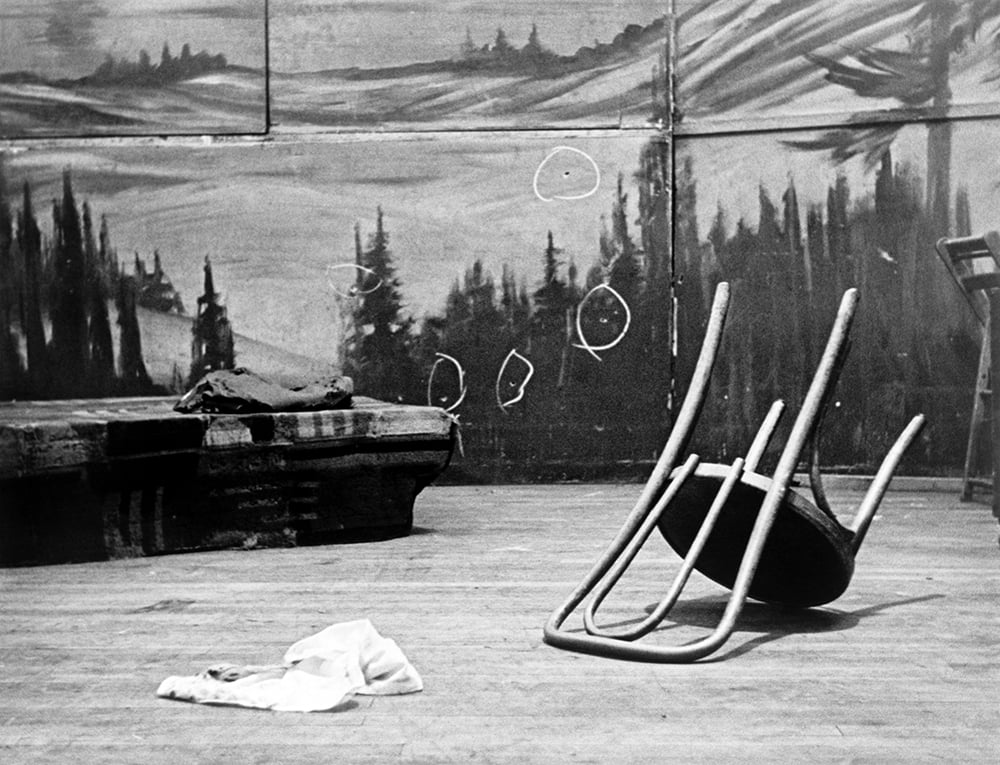 The Audubon Ballroom stage after the murder of Malcolm X, with bullet holes marked by circles, in Feb. 1965, Photo by Stanley Wolfson/LOC/Creative Commons

“(Non-Muslims) ignore how Malcolm’s embrace of true Islamic practices cleansed him of rancor,” says Harris Zafar, national spokesperson for the Ahmadiyya Muslim Community. “His hajj enabled him to see the white man as a possible ally.

“For Muslims, this is an inspiration that redemption and spiritual progress is always available to us when we turn to our faith,” said Zafar.

Just as Malcolm X was influenced by the lived Islam he encountered in Africa and the Middle East, many Muslims around the world today now find inspiration in his life.

“Growing up in France, I was first introduced to Malcolm X in history class. As the child of first-generation Moroccan immigrants, I was moved by the life of Malcolm X,” says Kamal Moummad, who later moved to Hollywood to become an actor. “I was moved by his relentless fight for equality and justice in the context of his faith.” 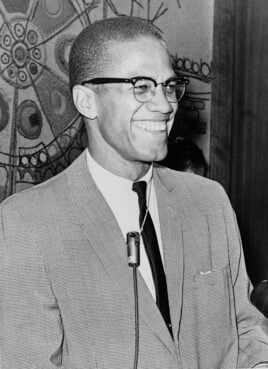 That Malcolm X would be introduced to children in French schools suggests just how much the world has changed since 1965. Just weeks before his death, Malcolm X was denied permission to visit France, where authorities considered remarks he had made there the previous November too violent.

Malcolm X’s willingness to put an edge of violence in his rhetoric is part of what made him a divisive figure during life and since his death. His reputation was exacerbated by his support for the 2nd Amendment and time in prison as a young man. But Zafar pointed out that his early encounter with Islam came during his incarceration, through the work of a Boston-area Ahmadiyya missionary named Imam Abdul Hameed, to whom he was first introduced before his imprisonment.

“Imam Abdul Hameed visited Malcolm at Norfolk Prison Colony many times,” said Zafar, “and taught him how to pray in Arabic and even gave him an Arabic prayer book to learn further Islamic prayers.”

But Malcolm X’s implacability is part of what makes him such a powerful model for Muslims today.

“Malcolm X also represents the drive to demand full rights and not partiality,” said Salam Al-Marayati, the president of the Muslim Public Affairs Council. “In paraphrasing him, it’s not enough to have someone pull a knife out of your back halfway and say thank you. Finally, he represents that self-reliance that we demand from ourselves today.”

News
New projects offer churches ways to pay royalties on the spirituals they sing
Follow us on Facebook!
Submit your photos to RNS