(RNS) — Maybe the past year of pandemic and a reckoning over racial injustice have readers turning to lament. Maybe polarizing politics have them feeling imprecatory. But several new books about prayer from popular Christian authors have landed on bookshelves in the past month — and they seem to be resonating with readers.

“A Rhythm of Prayer: A Collection of Meditations for Renewal,” edited by progressive Christian author Sarah Bessey, made bestseller lists last week in both the United States and Canada.

And the Rev. James Martin, a Jesuit priest and editor-at-large of America Magazine, appeared on “A Late Show with Stephen Colbert” to discuss his latest book “Learning to Pray: A Guide for Everyone.”

Host Stephen Colbert was quick to tie the topic of prayer to the pandemic, asking Martin, the unofficial chaplain of Colbert Nation, for suggestions on different ways people can pray, even as they may not be able to participate in person in other religious activities.

“I know that so many people in COVID right now — many people are turning to their faith, and it’s very frustrating for them because of the limitations of social distancing. People don’t feel comfortable going to church,” Colbert said.

Here’s a look at three new books about prayer and thoughts from their authors on why the topic is resonating. 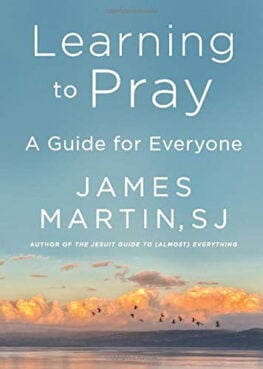 “Learning to Pray: A Guide for Everyone” by the Rev. James Martin. Courtesy image

It makes sense to Martin that the topic of prayer is resonating with readers right now.

“During a time of pandemic and division in the country, it’s natural for people to be worried and turning to God,” he told Religion News Service.

“But also during this pandemic, we have all become involuntary monks, and so prayer becomes more of a natural part of our lives. I think for so many different reasons, we’re turning more towards prayer,” he said.

The Jesuit priest defines prayer as “conscious conversation with God.”

In “Learning to Pray,” Martin said he wanted to make prayer accessible to everyone, to explain what happens when one closes his or her eyes and bows his or her head. So he wrote the book as a “carry-along spiritual director for people” to answer the same questions he has heard over and over again for the past two decades.

Prayer can bring a sense of calm, of hope, of peace, of God’s presence — a “great gift” in the midst of a troubling time, he said. It can help one to unburden him- or herself of worries and concerns or to feel solidarity with others, knowing at any moment people all around the world are praying, too.

For Martin, there is no “right way” to pray — prayer can look like a number of different things, from viewing nature as an image of God to practices like Lectio Divina or Ignatian contemplation. Prayer practices can look different for each person, not only year to year, but also day to day, he said.

“If it brings you into an encounter with God, it’s a good prayer,” Martin said.

Prayer in the Night 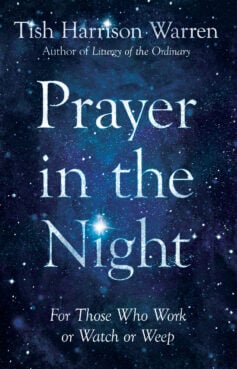 “Prayer in the Night” by Tish Harrison Warren. Courtesy image

For the Rev. Tish Harrison Warren, a priest in the Anglican Church in North America and author of “Liturgy of the Ordinary: Sacred Practices in Everyday Life,” praying Compline — a nighttime liturgy from the Book of Common Prayer — is what got her through the compounding grief of one of the hardest pre-pandemic years of her life, including the death of her father, two pregnancy losses, a surgery and a cross-country move.

She documented what she learned during that time in her latest book, released in late January, “Prayer in the Night: For Those Who Work or Watch or Weep.”

It was a time when, Warren said, she was “a priest who couldn’t pray.” She needed those well-worn words of a familiar prayer.

Compline prayers include words like, “Keep watch, dear Lord, with those who work, or watch, or weep this night.” They acknowledge sickness and peril and darkness and death. They gave Warren the words when she wanted to pray but was too weary and heartbroken to find them, she said.

This past pandemic year, the Anglican priest has turned to a number of different prayer practices. Praying the Psalms, which run the “whole gamut of human emotion,” has shaped her own emotions, she said. Prayers of silence have freed her from feeling like she has to “perform” when overwhelmed by events like the country’s 500,000 COVID-19 deaths or the insurrection at the U.S. Capitol, she added.

And she has discovered that the book she wrote largely in 2018 about prayer and doubt and mortality now seems “weirdly timely,” she said.

“Part of me, because I’m a Christian, I’m like, well, the Holy Spirit knew the church would need prayer right now. It’s a terrible, terrible time, and we’re all separated. We can’t meet. Many of us are not meeting in person in the same way,” Warren said.

A Rhythm of Prayer 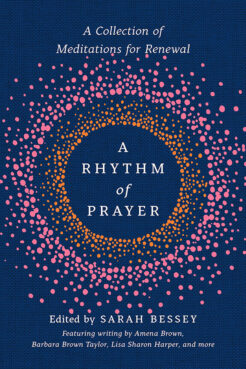 “A Rhythm of Prayer: A Collection of Meditations for Renewal,” edited by Sarah Bessey. Courtesy image

They include a benediction by Bessey, a poem by Potawatomi Christian author and speaker Kaitlin Curtice, a prayer based on a chicken soup recipe by pastor and peacemaker Osheta Moore, “A Liturgy for Disability” by author and disability advocate Stephanie Tait, a “Prayer of a Weary Black Woman” by clinical psychologist and womanist theologian Chanequa Walker-Barnes, and even blank pages for those times when it feels like there aren’t words.

That’s partly because there are as many different ways to pray as there are people who pray, and she didn’t want to make something as personal as prayer “incredibly prescriptive and formulaic,” said Bessey, whose books include “Out of Sorts: Making Peace with an Evolving Faith” and who co-founded the Evolving Faith conference with the late Rachel Held Evans.

It’s also partly because, in the months after Evans’ death, Bessey didn’t think she could write the book alone.

“I literally turned to these women because they were the ones that I trusted,” she said, referring to the contributors in the book who are all women. “They’re people I trusted to be honest, people whose leadership and activism and work in the world personally impacted my life or changed me in some way, and I trusted them with my grief.”

Still, Bessey was surprised when she learned last week that the collection was a New York Times bestseller, ranking No. 5 on the newspaper’s list of “Advice, How-To & Miscellaneous” books. Later, it made the Globe and Mail and Publisher’s Weekly bestseller lists, too.

“It feels really ridiculous. I think it might be a mistake. The kinds of things that I write and that I like to read and the kinds of things that we talk about in that book don’t seem like the kind of thing that would normally end up on The New York Times bestseller list,” she said in a video she posted on Facebook.

Bessey said prayer always has been an integral part of her faith — even more so after deconstructing the conservative, charismatic Christian beliefs she grew up with.

But she told RNS she has heard from so many people who feel like they no longer can pray the way they were taught after leaving previous religious traditions.

“I would say that’s good. Oftentimes you need to lose the old pathways in order to find new pathways, to even have eyes to see ancient pathways,” she said. “And so I think that that’s part of where that hunger comes from, is just saying, ‘I want to connect with God, I want to speak to God, I even have a yearning to pray, but I don’t know how anymore.’”