(RNS) — When Pope Francis lands in Iraq on March 5 for an unprecedented papal visit to the country, he’ll begin three days of high-level religious diplomacy. In Baghdad, he will meet political leaders and Catholic priests and nuns at the site of an al-Qaeda attack in 2010. The next day, he will travel 100 miles south to Najaf to see Grand Ayatollah Ali al-Sistani, one of the world’s leading Shiite spiritual leaders and the center of gravity for religious life in Iraq.

The meeting will lack the glitz of Francis’ February 2019 visit to Abu Dhabi, where he signed an ecumenical peace document with the Sunni Muslim grand imam of Al-Azhar, but his time with al-Sistani is an opportunity to build relations with the other side of the house of Islam.

Deepening Christian-Muslim ties has been a priority for this pope, and the issue’s importance for this upcoming trip is signaled by its logo, taken from Jesus’ words in the Gospel of Matthew: “You are all brothers.”

In January, when Iraqi President Barham Salih met with the pope, the plight of persecuted Christians was front and center. They reportedly discussed “preserving the historical presence of Christians in the country” and “highlighting the need to guarantee their security and a place in the future of Iraq.” 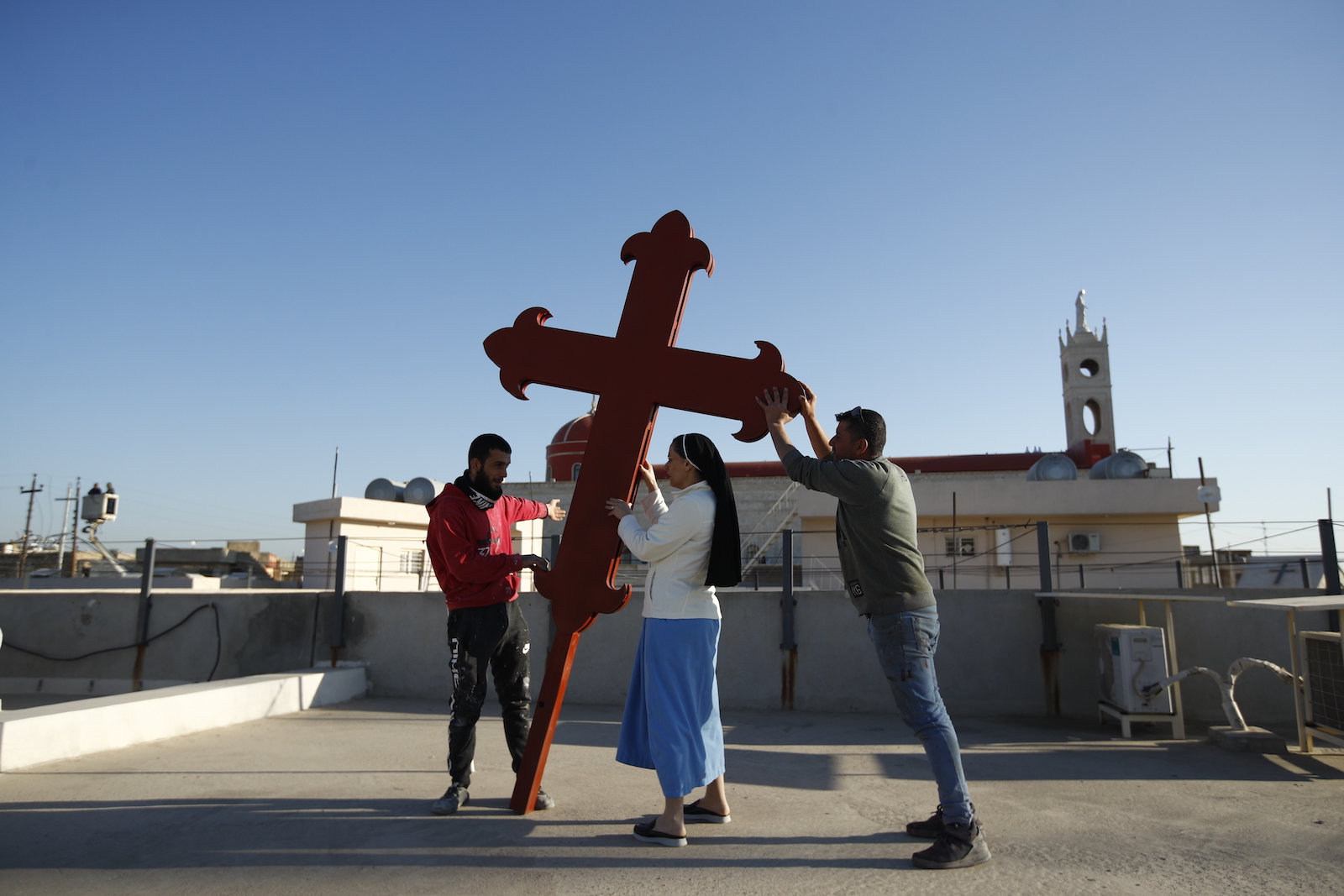 Iraqi Christians place a cross on a church in Qaraqosh, Iraq, on Feb. 22, 2021. Iraq’s Christians are hoping that a historic visit by Pope Francis in March will help boost their community’s struggle to survive. The country’s Christian population has been dwindling ever since the turmoil that followed the 2003 U.S.-led invasion. And it was dealt a near death blow in 2014, when Islamic State group militants overran northern Iraq, site of Iraq’s historical Christian heartland. (AP/Photo/Hadi Mizban)

Francis’ itinerary, too, reflects his interest in Christians’ plight. He will hold a Mass in Qaraqosh, a Christian town in the Nineveh Plains that was invaded by the Islamic State group in 2014. The occupation that followed was brutal, destroying many churches and homes. The pope’s visit will highlight the positive story of returns as well as the people’s many remaining needs.

But it will be hard to overcome the sense of foreboding and vulnerability that plagues the efforts to return Christians and other religious minorities like Yazidis to their homelands. Iraq’s religious minorities live in a security vacuum. Even though IS was pushed out of northern Iraq, the central government has struggled to regain control, leaving minority areas exposed to violence from IS sympathizers and various militias such as the Hashd al-Sha’bi.

Security is the most important obstacle to reviving minority religious life and the hardest to address. Minorities must play a role in their own protection. If not, they won’t go back. Considering the IS depredations and the failure of Iraqi and Kurdish security forces, who can blame them?

If left unaddressed in concrete ways, the fear of violence will persuade minorities to abandon their ancestral homelands for good.

But there are lower-profile changes Francis can press for. Non-Muslims have voiced concern about a section of the National Identity Card Law that recognizes a citizen’s conversion to Islam from another faith, but not the reverse. 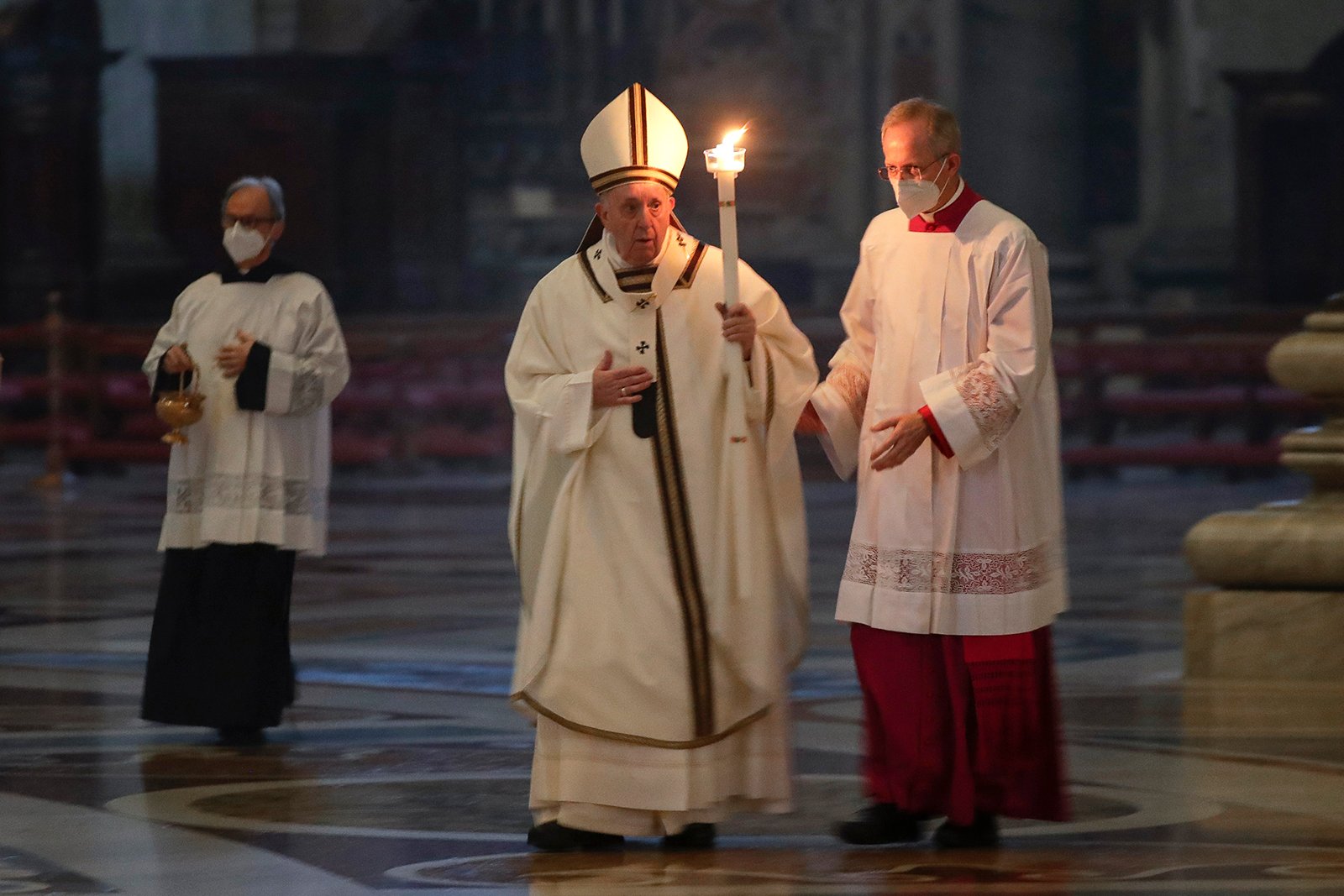 Pope Francis holds a candle as he arrives to celebrate a Mass with members of religious institutions on the occasion of the celebration of the World Day of Consecrated Life, in St. Peter’s Basilica at the Vatican, on Feb. 2, 2021. (AP Photo/Andrew Medichini, pool)

The law also declares that if a non-Muslim parent converts to Islam, the children are automatically considered Muslim in their identity documents, according to William Warda, the founder of the Hammurabi Human Rights Organization. The law robs the children of any agency in deciding which faith to follow.

Warda believes the pope raising this issue with Iraqi politicians on the grounds of discrimination could protect Christian children from forced conversions.

Yazidis also continue to be excluded from legal recognition, and Iraq has failed to prosecute IS members for crimes against Yazidis. Their homeland of Sinjar is also awash with rival militias, making returns dangerous.

But will it result in progress on human rights? Shamdeen is not so sure. He noted how “the lasting effects of genocide on the Yazidi community will not end until minorities are afforded full protections and rights in Iraq.”

Iraq is a complicated, fractious place, and Francis can only accomplish so much. But much is riding on his visit. Hopefully, he will press on these issues during his historic visit. Many people are praying for his success.

(Knox Thames was special adviser for religious minorities at the U.S. Department of State from 2015 to 2020 and is currently writing a book on 21st-century strategies to combat religious persecution. Follow him @KnoxThames. The views expressed in this commentary do not necessarily reflect those of Religion News Service.)