JERUSALEM (RNS) — An order by Israel’s high court requiring the government to allow those who converted to non-Orthodox Judaism in Israel to become citizens has elicited strong support from Reform and Conservative Jews and condemnation from Orthodox rabbis and lawmakers.

The ruling “was years in the making and reflects the diversity and vibrancy of Jewish life in Israel and around the world,” said Rabbi Rick Jacobs, president of the Union of Reform Judaism, of Monday’s (March 1) court decision, which came 15 years after non-Orthodox converts first petitioned the court for permission to immigrate.

“We hope this ruling establishes a precedent that will lead to further recognition of the Reform and Conservative movements in Israel,” said Jacobs.

Until now, the Israeli government has recognized converts to Reform and Conservative Judaism if they converted to Judaism outside Israel — but solely for the purpose of citizenship:  The Chief Rabbinate, which has sole authority over Jewish matters in Israel, does not consider either group of converts authentically Jewish.

Israel has steadfastly refused to accept the authority of Reform and Conservative rabbinical courts within Israel over matters of conversion, marriage, divorce and other matters pertaining to Judaism.

The ruling promises to become a political hot potato, coming just three weeks before Israelis are set to go to the polls for the fourth time in less than three years. The country’s Orthodox parties, a crucial voting bloc, are vowing to introduce legislation to nullify the ruling and expect Prime Minister Benjamin Netanyahu to support the legislation.

Netanyahu must decide whether to alienate the Orthodox coalition partners he will almost certainly need to win the next election or anger American Jews, the vast majority of whom are non-Orthodox and who support religious pluralism in Israel.

The ruling has incensed Israel’s government-supported religious establishment, which is run by Orthodox and ultra-Orthodox rabbis.

“What the Reform and Conservatives call ‘conversion’ is nothing but a forgery of Judaism,” Chief Sephardic Rabbi Yitzhak Yosef said in a statement, calling on lawmakers to find a “quick” way to overturn the ruling via legislation in the parliament.

The U.S. Conservative movement’s Rabbinical Assembly said in a statement that the ruling “was a very long time coming. Not swift justice, but sweet and righteous just the same.”

Referring to Orthodox threats to void the ruling via legislation, the movement called on “all parties” in Israel “to respect the decision of the court and to proactively protest attempts to legislate against religious freedom in Israel, as well as Jewish communities abroad.”

Uri Regev, a Reform rabbi and president and CEO of the NGO Hiddush: For Freedom of Religion and Equality, said the Orthodox backlash against the court’s decision, coming just prior to the national election, “should illustrate to us how critical the upcoming elections are for the future of the State of Israel and the Jewish people.” 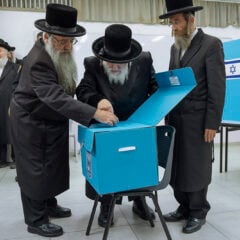