(RNS) — A reader contacted me recently to say he’d been selected for an internal survey of The Church of Jesus Christ of Latter-day Saints. He wondered if I’d like to see screenshots of the questions the church was asking of young adult members from ages 18 to 35.

Of course I would!

This is valuable information for me as a researcher who studies young adult Mormons. And frankly, it’s also valuable to me as a rank-and-file member of the church, just to see what the church wants to know and what changes are being floated as possibilities for our future.

The survey, dated March 3 of this year, is remarkably extensive; I have 47 printed pages from the screenshots. From context, it appears to be directed at single people, as there are questions about YSA wards, dating and whether single people have enough positions of authority.

The survey’s designers are clearly trying hard to generate honest responses from as wide a range of young adults as they can. I don’t have a screenshot of the introductory page, but according to my reader, it asked people to participate even if they had negative experiences or opinions to share.

That’s huge. I’m not privy to the church’s internal data — which, as with the internal data of many religions and organizations, is not shared publicly — but I know its survey pool (primarily active members who have given their email addresses to the church) can skew toward people for whom the church is working well. The ones who dropped out along the way don’t update their contact information or want to be asked about their experiences. So it means something that the church is trying to actively solicit dissenting points of view.

Consider this one, toward the end of the survey:

The fact that there are several possible choices of degree to which someone could be bothered by the church’s approach to LGBTQ+ issues (as well as the fact that the survey uses the term LGBTQ+ at all) is significant. The same goes for the questions on women’s roles and racism, which are also components of that section of the survey.

When Benjamin Knoll and I conducted the Next Mormons Survey five years ago, we noted how sensitive young adult Mormons were to feeling judged. For millennials who had left the religion, “I felt judged or misunderstood” tied for first place in their reasons why. And when they were asked what might have helped them to stay, the answer “if ward members had been more loving and less judgmental” ranked second, just behind “if the Church had more inclusive positions on social issues such as same-sex marriage or women’s roles in the church.”

With those findings in mind, it’s heartening to see the church taking a hard and introspective look at its own culture. In its survey, the church asks whether young adults think “Church culture punishes some sins and sympathizes with other sins,” and whether they “feel misunderstood by Church members” or “feel judged by Church members.” One question even names possible groups that might be excluded and asks whether this is troublesome to respondents: “Certain groups of people are looked down upon in the Church (e.g., divorced people, people with tattoos, liberals).” 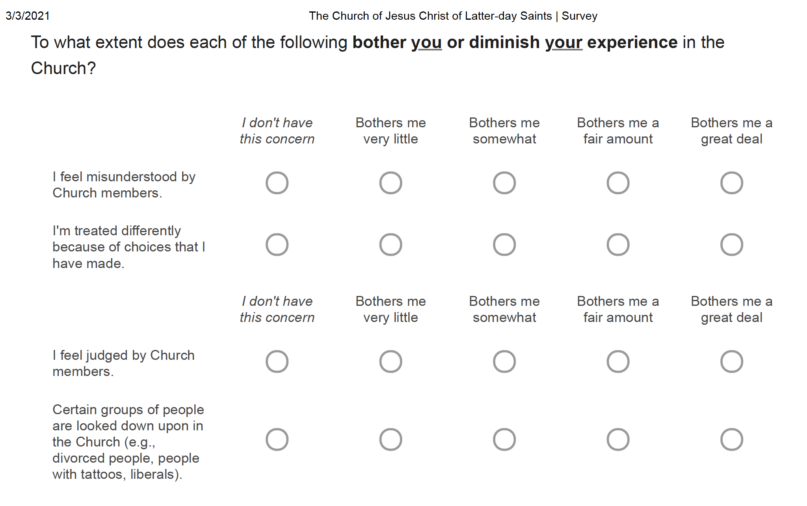 A few of the NMS questions or options are used verbatim in the church’s survey, which warmed the cockles of my geeky heart. Just as a note: In social science, this is not plagiarism. Researchers routinely make their questions available to other researchers (ours are all posted here) precisely so people can evaluate how the same exact question might be received differently by a different population, or a few years later. It’s how research moves forward. (I just wish I could see their results!)

Most fascinating to me as a member were the surprising innovations that seem to have gained enough traction at the brainstorming stage that the church wants to know what members might think of them. Some of these have to do with rethinking the structure of young adult wards:

Other questions deal with far-reaching aspects of Mormon life and worship that could potentially affect all members. Some that jumped out to me were:

(Praise music? I did not think I would see the day that would even be considered as an option, even if the survey is just spitballing various possibilities.)

In a chapter of “The Next Mormons,” I discussed how millennial Mormons had a complex relationship with authority. A majority were not watching General Conference; they did not seem to desire guidance from general authorities on some topics; they scored the lowest of any generation of Mormons in their expectation that they would obey priesthood counsel they disagreed with. On the other hand, millennials expressed the highest levels of consulting with their bishops about personal problems or major decisions.

The church’s survey has a strong focus on individuals’ relationship with their bishops, and also on how they want to receive spiritual messages from institutional sources (church broadcasts and curriculum) versus less formal conversations with family, friends and local leaders.

Presumably, this is in line with religious research showing young adults are far more interested in mentoring, one-on-one relationships than they are in institutionalized forms of religious authority.

I’m delighted the church is asking these important questions, and hope it will lead to some much-needed changes.

Gen Z is lukewarm on religion, but open to relationships, study shows

Do Mormons leave the church because they ‘got offended’?