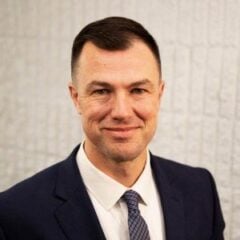 And that’s just the roughly 6 in 10 who are still affiliated.

That lack of trust among religiously affiliated teens and young adults is one of many surprises in the “State of Religion and Young People” study released by Springtide Research Institute, which was founded in August 2019. The study surveyed more than 10,000 Americans ages 13 to 25 — the so-called Gen Z generation — about their involvement in, and feelings about, religion.

“They’re checking the box that says they are Jewish or Catholic or whatever, but over half of them are saying, ‘even though I checked the box, I don’t trust organized religion,’” said Josh Packard, a sociologist of religion who is the executive director of Springtide. “This is sort of stunning and not what you would expect from somebody who checked the box.” 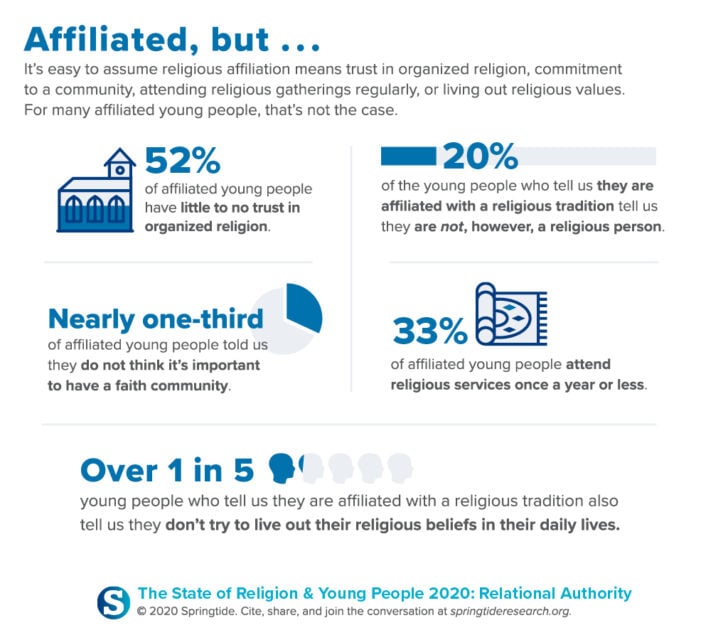 More than half of young people who are affiliated with a particular religion don’t trust religious institutions. Springtide Research Institute, 2020

He thinks the study’s findings should complicate, if not make obsolete, the notion that we can use “affiliated” as an easy shorthand for “religious” in America. Other findings in the study bear this out, including that about 1 in 5 Gen Z members who are affiliated with an organized religion also say they are not personally religious.

“The categories that used to be really effective indicators of their faith and spirituality are just not anymore,” Packard said. “You can’t rely on the old metrics like we might have once been able to.”

For example, 60% of teens and young adults who are not involved with an organized religion described themselves as spiritual, and 19% said they attend religious gatherings at least once a month. 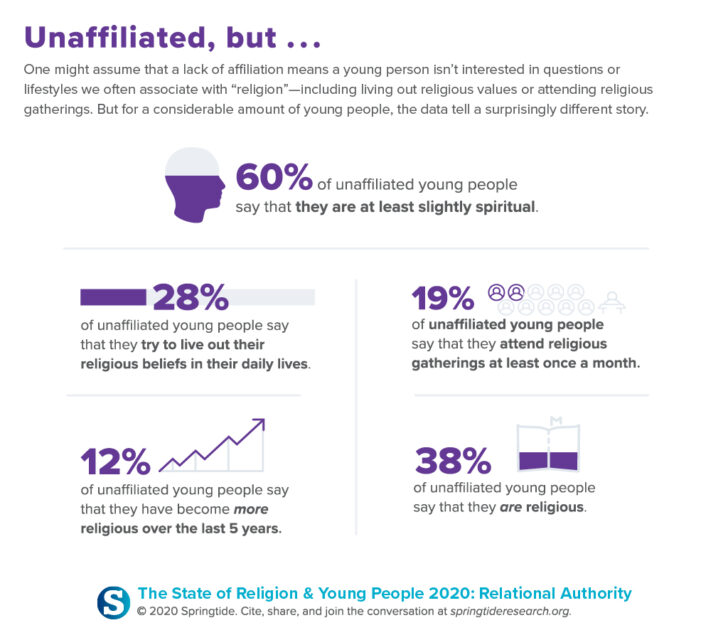 One surprising finding was that 60% of young people who are not affiliated with religion said they considered themselves spiritual. Springtide, 2020

There are some other surprises in the study’s 119-page report, which is available for free. One is about gender. In the past, it’s been clear that men and boys have been more likely to leave organized religion than women and girls. The gender imbalance among religiously unaffiliated Americans has skewed male for years.

In this study of Gen Z, however, the edge among the unaffiliated goes to girls and women, 40% of whom are not involved with an organized religion. This was true of 36% of those who identify as male.

Packard was reluctant to draw definitive conclusions without more data, but he pinpointed many religions’ historical lack of gender equality as a likely factor.

“I would be stunned as a sociologist if it isn’t connected to the greater push that we’ve seen over the last 5 to 10 years for more equality in all facets of life,” he said. And the push may rise over time, as those born in the 1990s and early 2000s have kids of their own and emphasize gender equality at an early age. 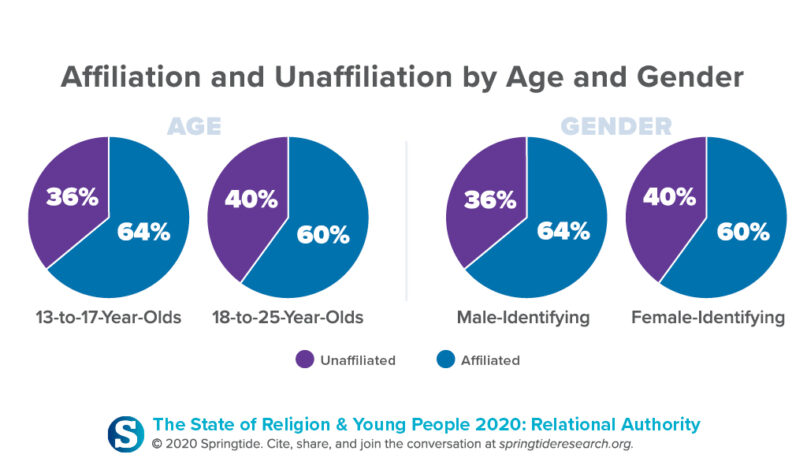 For religious leaders and parents who are wringing their hands about how to get young people reengaged in organized religion, Packard worries they’re focusing on the wrong things. Religion has not disappeared; it’s just become more diffuse. What used to happen via programs at churches and synagogues has moved outward into the wider world.

“A declining trust in institutions means the work they used to do falls to others,” the Springtide report suggests. “If the work of meaning making or community building once fell to religious organizations, it is now the domain of groups like Nuns & Nones, The Dinner Party, boutique and garage gyms, or even the workplace. Related to this, with decreased trust in government, a renewed culture of protests, rallies, and petitions has emerged as civilians take social and political matters into their own hands.”

The challenge for religious organizations is to pivot with the times — to stop evaluating their success based on how many young people show up for a pizza party and start establishing small-scale mentoring relationships between committed religious adults and young people who want to have religious conversations.

And there are a lot of these young people, the research shows. They are interested in religious questions but express their beliefs in noninstitutional ways, including everyday moral matters like what they buy. “They’re asking, ‘How am I taking care of the planet with this purchase? Who am I buying it from? Does that company support fair wages? Do they support the causes that I care about?’” Packard said. “These are more than just social justice concerns. Young people talk about these questions in religious language.”

They also respond to “relational authority,” which means authority that is not based on hierarchy or titles so much as a genuine interest in young people as individuals. Four in 5 Gen Z members surveyed said they were likely to take guidance from adults who care about them. The report pinpoints five values that characterize this relational authority: listening, transparency, integrity, care and expertise. (Expertise comes last on the list intentionally, because 65% of young people say an adult’s expertise doesn’t matter unless the adult cares for them. Listening comes first in establishing a genuine, nontransactional relationship.)

Religion outside the box of programs and buildings is a fresh challenge for many religious leaders and teachers, Packard acknowledges. It’s also harder for sociologists to track. “The local chapter of your National Association for Loosely Affiliated People Interested in Vaguely Religious Questions doesn’t meet at Starbucks on a Wednesday,” he joked. But he stresses it’s important to resist the temptation to label teens and young adults.

“This is the most diverse and complex generation that has ever existed,” he said. “Their religious lives are no different.”

The best book about millennials and the church