(RNS) — The U.S. Senate’s Judiciary Committee, now considering the fate of the Equality Act, can add a new entry on the positive side of the evidence ledger: a new study shows overwhelming public support for LGBTQ nondiscrimination laws.

The 2020 American Values Atlas study from PRRI finds 76% of Americans favor laws that would protect LGBTQ people from discrimination in jobs, housing and public accommodations — up from 72% in 2019, and the highest percentage recorded by the nonprofit public polling firm since it began asking the question in 2015.

“If you look at the trends overall, they’ve been pretty consistent trending upward,” said Natalie Jackson, PRRI director of research.

Support for nondiscrimination laws cuts across age, race, religious and political lines. It has grown fastest among Black Americans and white Mainline Protestants, according to the study — a series of polls conducted in 2020 among 50,033 Americans. These two groups saw a jump in support of 10 percentage points each over the course of the past five years.

And every religious group polled — including white evangelicals — said they supported LGBTQ nondiscrimination laws by at least 60%. Among Hispanic Catholics, white Mainline Protestants and unaffiliated Americans, support for such measures tops 80%. 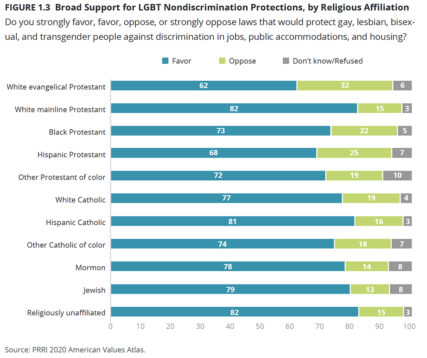 But that does not mean religious leaders will follow.

Many evangelical and conservative Christians, such as the Southern Baptist Convention and the U.S. Conference of Catholic Bishops, oppose the idea of adding sexual orientation and gender identity as protected classes, in addition to those already protected, such as race, color and national origin.

Others religious groups support broadening the protected classes to sexual orientation and gender identity but oppose the Equality Act because it lacks sufficient religious exemptions for institutions that uphold traditional beliefs about marriage and sexuality.

The Equality Act, which passed the Democratic-controlled U.S. House of Representatives on Feb. 25 and was debated in the Senate’s Judiciary Committee last week, would amend the 1964 Civil Rights Act to ban discrimination based on sexual orientation and gender identity.

It would also override the Religious Freedom Restoration Act, which prohibits the federal government from “substantially burdening” individuals’ exercise of religion unless there’s a compelling government interest.

An alternative bill, called Fairness for All, has also been introduced in the House. It would provide broad protections for LGBTQ people and, at the same time, provide exemptions for religious institutions.

Fairness for All has been championed by the Council for Christian Colleges and Universities, the Seventh-day Adventist Church and the Church of Jesus Christ of Latter-day Saints. Last week, 57 Black clergy, many who lead Black denominations, also said they would support Fairness for All.

The Equality Act in its current form probably has no chance in the Senate, given it will need 10 Senate Republican votes in order to beat back a GOP filibuster.

The PRRI poll also showed broad opposition to religiously based refusals, such as bakers and florists refusing to serve LGBTQ people. Majorities of white Catholics (60%) and white mainline Protestants (59%) oppose such refusals. White evangelical Protestants (46%) were the only religious group where less than a majority opposes service refusals.

READ: ‘Allergic to religion’: Conservative politics can push people out of the pews, new study shows