Singer Norah Jones and presidential daughter Chelsea Clinton are among the performers and activists who will take part in the Thursday (March 25) event that will be broadcast from Bloomingdale’s Studio 59.

The Rev. Jacqui Lewis, senior minister of the multiethnic church, said the people who will sing and speak on her church’s behalf have direct or indirect connections to the congregation.

For example, co-host and actor/singer Tituss Burgess is a member. Both Jones and Aunjanue Ellis of ABC’s “Quantico,” who also will participate in the benefit, have attended Middle Church, as it’s often known. Spiritual author Marianne Williamson and motivational speaker Gabby Bernstein have spoken at the church. Lewis and Clinton met when both were honored with 2014 Lives of Commitment Awards by New York’s Auburn Seminary.

“Many of those folks belong to Middle but most importantly they feel connected to the work we do in the city, the work we do in the nation around justice and movement building, LGBT rights, Black Lives Matter,” said Lewis in a Tuesday interview. “They know us by our fruit. They know we walk our walk and we talk our talk so they feel connected to us.”

Burgess and co-host Bevy Smith, a TV personality and SiriusXM show host, are scheduled to appear live at the benefit concert. Other appearances will be prerecorded.

Lewis said she hopes the event could raise as much as $300,000. The Eventbrite invitation, which had 400 registrants as of Tuesday, suggests donations ranging from $25 to $10,000.

She declined to say how much has been collected since the fundraiser was announced but said, “We are doing well and we hope we’ll hit our mark.”

Since the Dec. 5 fire that ravaged the church, Middle Collegiate has raised $1.2 million, $200,000 of which was raised in the first week. Lewis said the church’s goal is to raise $2 million by June 30, though the rebuilding will cost much more and a start date is not known. 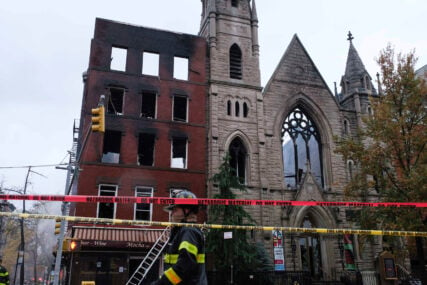 Firefighters work to extinguish a fire that erupted from the building next to Middle Collegiate Church on Dec. 5, 2020, in New York. The historic 19th-century church in lower Manhattan was gutted by a massive fire that sent flames shooting through the roof. (AP Photo/Yuki Iwamura)

Lewis said the new circumstances have not changed the church’s plans to devote $200,000 of its current budget to reparations that involve providing housing assistance and anti-racism training. The church, whose early clergy included slaveholders, was started after Dutch Reformed settlers bought the land that eventually became Manhattan from the Lenape, a Native American nation, in an unfair transaction.

The senior minister said the church has hired a campaign consultant and is getting advice from arts, justice and faith organizations as it starts to make rebuilding plans. Her staff is beginning to look at spaces that have been offered to the congregation — including churches and synagogues — that it might use for staff meetings, small gatherings and “to take our musicians, our dancers, our artists into their spaces to record art for worship.”

Lewis said she has been encouraged by the contributions and notes of concern the church has already received from across the globe.

“It has been both a difficult time and a time that has been surprisingly filled with blessings,” she said.

Lewis added that she sees New York’s Liberty Bell as a sign of the church’s resilience. Long housed in the church, it rang in remembrance of the 9/11 terrorist attacks and survived the fire. News
New York church to devote $200,000 to ‘reparations’ with housing help, anti-racism training
Follow us on Facebook!
Submit your photos to RNS