At every Seder that I have led or attended for the past several decades, when we get to the Ten Plagues, someone offers his or her own list of modern plagues. It would be hard not to; many modern haggadot contain such lists. It would be even harder not to, as we observe our second Passover confronting a modern plague from which there is still no redemption.

By the way, “someone” includes me.

When we list those plagues, it is a matter of “round up the usual suspects”: racism, homophobia, global warming, economic injustice, guns, modern slavery, etc.

Of course, the list of modern plagues always depends on your political and cultural viewpoint. I can imagine The Neo-Con Haggadah, with its own list of plagues: American weakness, CNN, MSNBC, The New York Times. …

There is only one problem with listing these new plagues. The practice ignores or minimizes the role of the “real” plagues and their positioning in the Haggadah.

The recitation of the plagues comes right before the singing of Dayeinu — “It would have been enough!” It might be hard for us to imagine this now, but the original plagues were actually the allies of the ancient Israelites. They were (choose one or both):

The Passover Haggadah is definitely “pro-plague.” In fact, in traditional haggadot, the ancient sages pile on; they like to imagine that instead of 10, there were 50 plagues, or more — as many as 250 plagues.

Let us remember the widespread custom of spilling a drop of wine for each plague — in order to diminish our own joy at the suffering of the Egyptians. That is no modern “politically correct” insertion. It echoes a traditional Jewish sensibility — as Proverbs puts it, “do not rejoice when your enemy falls.”

That being said, is there a way to include the challenges of our time without (inaccurately, IMHO) resorting to adding to the list of plagues?

The purpose of Pesach is for us to remember Yetziat Mitzrayim — the exodus from Egypt. Here I hasten to mention that the Hebrew word for Egypt, Mitzrayim, is in the plural form.

There is not one Egypt. There have been many Egypts. Those Egypts still exist in our world.

So, too, Pharaoh. The Haggadah reminds us: “In every generation, there are those who would rise up against us and oppress us.” The “us” means the Jews, but it goes beyond the Jews. “In every generation a person — adam — and not ‘a Jew’ — must view himself or herself as if he or she had personally got out of Egypt.”

The biggest problem with Pharaoh was simply this: His heart got hardened. That was not an emotional issue regarding his feelings. For the ancient Israelites, the heart was the seat of the intellect.

Pharaoh just didn’t get it.

Our most pernicious modern Pharaoh is our failure to get it.

So, what are our modern Pharaohs?

Oh, here are two for Georgia:

A joyous, sweet, liberating Pesach to all of you. 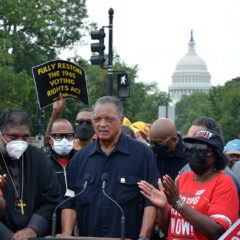