(RNS) — A traditional Latin Mass was held Monday (March 29) for Eric Talley, the Boulder, Colorado, police officer who was one of 10 people killed in a mass shooting last week at a King Soopers grocery store.

The Archdiocese of Denver, in a statement, described Talley, a husband and father of seven children, as “a man of strong faith with a great trust in the Lord and a strong devotion to Mary.”

More than 1,400 people watched the Mass, which was livestreamed from the Cathedral Basilica of the Immaculate Conception in downtown Denver. Talley’s family members, at their request, were not shown on the service’s livestream.

As is tradition in a Latin Mass, the Rev. Dan Nolan’s back faced the people as he led the celebration of Mass in Latin. The Mass included intervals of choir singing and chanting. A number of women in attendance wore veils.

Denver Archbishop Samuel Aquila offered his condolences to Talley’s family as well as prayers for law enforcement officers, who he said are too often “taken for granted.”

“Eric has shown what is best about the service,” Aquila said.

The Rev. James Jackson gave thanks for Talley, who according to Boulder police led an initial team of officers inside the grocery store.

“He was a good man, an honorable and faithful father, a faithful husband, a son, a friend, a faithful and heroic officer of the law,” said Jackson, who gave the sermon. 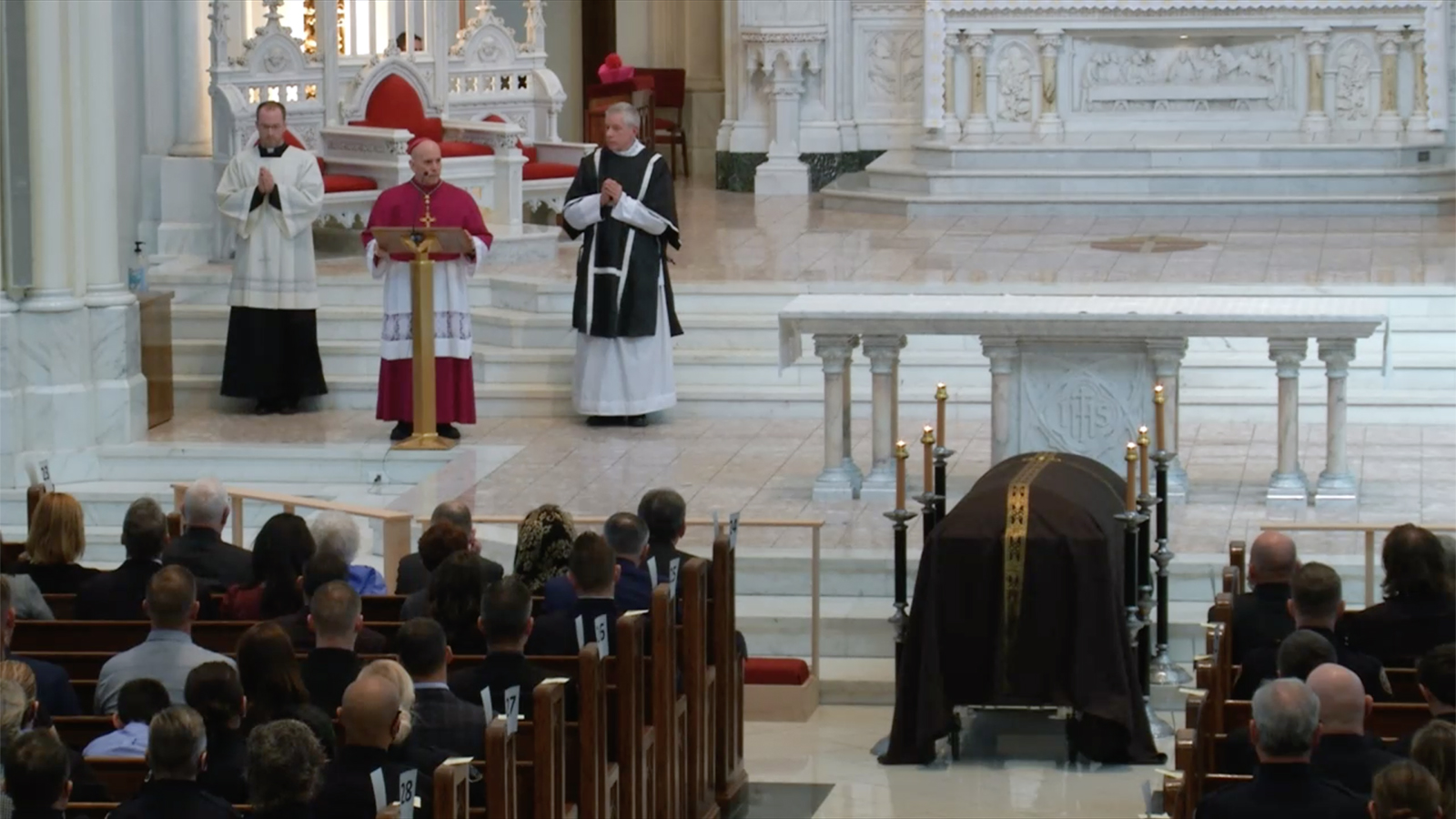 Denver Archbishop Samuel Aquila, at the lectern, speaks during the funeral of fallen Boulder, Colorado, Police Department Officer Eric Talley at the Cathedral Basilica of the Immaculate Conception on March 29, 2021, in Denver. Video screengrab

During the service, Jackson called for additional funding for police, as well as for restoring Christian culture.

“Who knows but that some politicians will show some common sense and move to increase funding for the police. Perhaps even more sense will be shown by efforts to restore Christian culture to our country,” Jackson said.

“Writing more and more laws will not be sufficient, but in the meantime today we give thanks to God for Eric’s life by celebrating a rite of Mass which Eric loved. He loved this Mass,” Jackson added.

Jackson noted the differences in the kind of candles surrounding Talley’s casket draped in black, and the ones on the altar. The candles on the altar are of bleached wax, which Jackson said represents the living.

“We’re bleached, so to speak. We do not appear to others as we truly are,” Jackson said.

The candles around the coffin, Jackson said, are of unbleached wax, “symbolizing that he has now gone to God just as he was created, just as he is, unbleached.”

“Almost as if the flames coming from those candles is slightly different than the ones on the altar,” Jackson added.

“Life is changed, not ended,” he said.