(RNS) — The African Methodist Episcopal Church and leaders of other predominantly Black Christian groups are threatening to boycott national companies based in Georgia that, the church leaders say, did not do enough to halt the passage of a controversial elections law in the state.

“We cannot and will not support the companies that do not support us in our struggle to cast our ballots and exercise our freedom,” Bishop Reginald T. Jackson, who heads the African Methodist Episcopal Church’s 6th District of Georgia, said at a press conference on Thursday (April 1), according to the Atlanta Journal Constitution.

He demanded companies “commit and act” to combat the law, saying he and others will reject the companies’ products if they do not help fight it and similar legislation in other states.

The bishop has been calling for a boycott since at least March 25, when the bill, known as SB 202, was signed into law by Gov. Brian Kemp. At a protest outside the statehouse that day, Jackson singled out Atlanta-based Coca-Cola for failing to fight the bill that limits drop boxes, institutes voter ID requirements and bans handing out food and water to people waiting in line to vote, among other provisions.

Jackson argued the law amounts to “an attempt to turn back time to Jim Crow,” and noted that Coca-Cola pledged to be “allies to the Black Lives Matter movement” in 2020.

“We took them at his word,” the bishop said at the time, referring to Coca-Cola CEO James Quincey. “Now, when they try to pass this racist legislation, we can’t get him to say anything.”

Since then, both Coca-Cola and Delta Airlines, which is also based in Atlanta, have issued statements strongly condemning the law. But during a Thursday press conference held outside the World of Coca-Cola on Thursday, the Black faith leaders said the verbal condemnations are not enough.

“In Good Friday we are reminded that when Jesus was hanging on the cross, Roman soldiers heard him when he said ‘I thirst,’” the Rev. Jamal Bryant, senior pastor of New Birth Missionary Baptist Church in Lithonia, a suburb of Atlanta, said at the press conference.

“They dipped a sponge … in vinegar, and he refused to take it,” Bryant said. “I would dare say if Jesus was being crucified today and they offered him Coca-Cola, he would never take it, because he understands that Coca-Cola is on the side of the Roman Empire and not on the side of the oppressed people.”

In an interview with Religion News Service on Friday, Jackson said he is “very pleased” by the statements from Delta and Coca-Cola, and noted that he spoke with Quincey this week. 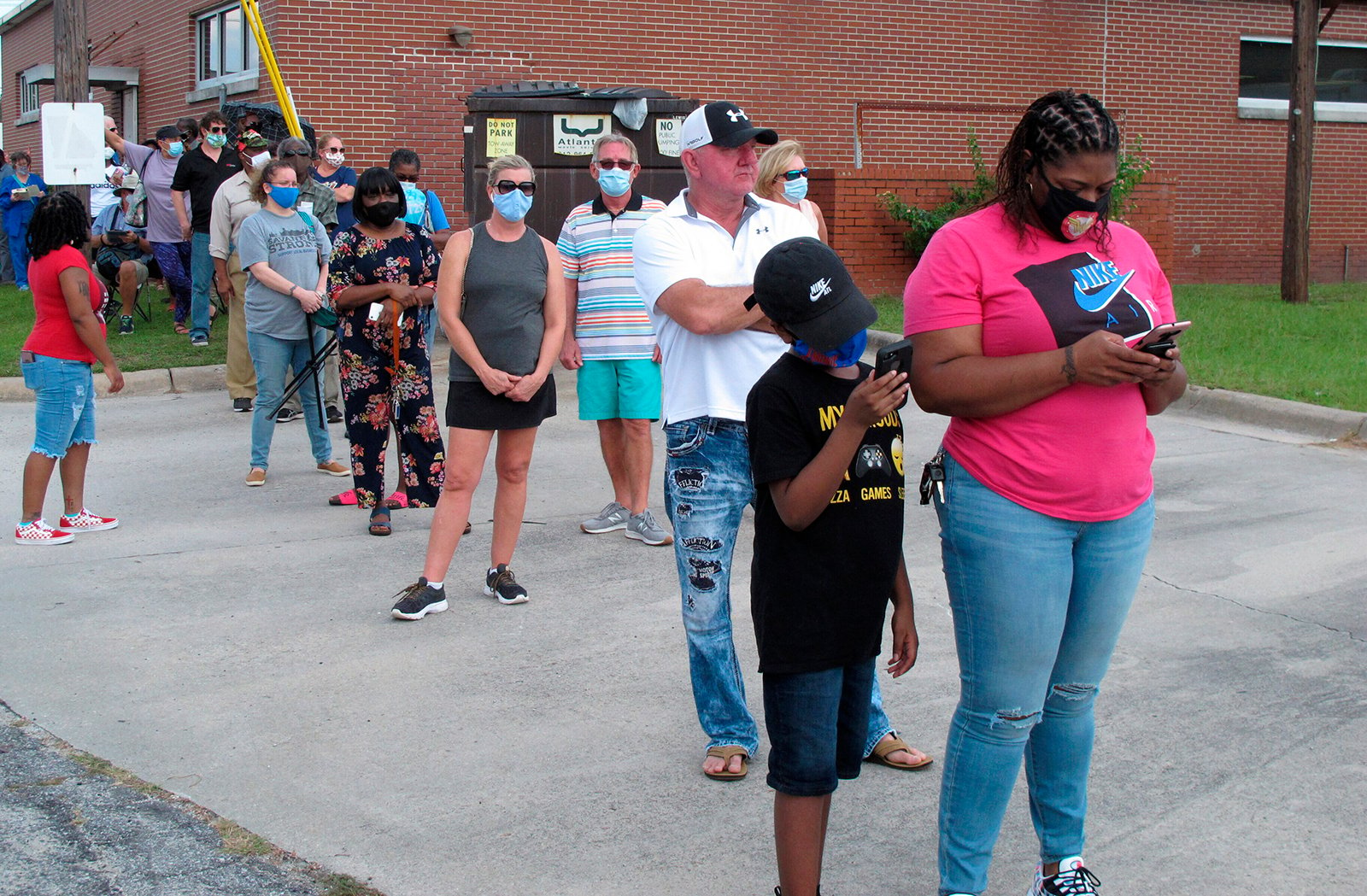 Voters wearing masks wait in line to vote early outside the Chatham County Board of Elections office in Savannah, Georgia, on Wednesday, Oct. 14, 2020. (AP Photo/Russ Bynum)

But the cleric said he told Quincey that he and other faith groups still plan to boycott Coca-Cola, Delta, Home Depot and other companies beginning April 7 unless they take four actions: speak out against the Georgia law; oppose similar legislation in other states; voice support for two federal voting rights laws (namely, the John Lewis Voting Rights Act and the For the People Act); and back a new lawsuit filed by faith groups and others declaring the Georgia law unconstitutional.

“I think already we’re beginning to make progress, and our hope is that we can get a host of these organizations to come back collectively in opposition (to the law),” he said.

Jackson noted the boycott involves not just the district he oversees in Georgia but the entire AME denomination, which boasts about 2.5 million members. The church will also back the ongoing lawsuit, which lists the AME’s sixth district as a plaintiff.

The bishop is already scheduling a meeting with the heads of Coca-Cola, Home Depot and Delta for Monday or Tuesday, and efforts are underway to expand the list of participants to include UPS, UBS and Aflac, all also based in Georgia.

There is growing support for additional boycotts as well: On Thursday, President Joe Biden said he would “strongly support” Major League Baseball players who believe the summer All-Star Game should be moved from Truist Stadium, where the Atlanta Braves play.

MLB announced on Friday they would move the game from Atlanta, with Commissioner Rob Manfred declaring: “Major League Baseball fundamentally supports voting rights for all Americans and opposes restrictions to the ballot box.”

Meanwhile, newly elected Georgia Sen. Raphael Warnock, who also pastors Ebenezer Baptist Church in Atlanta, has condemned the Georgia election law and championed the For the People Act — which he is co-sponsoring — in the U.S. Senate.

When asked about boycotts during a recent appearance on CNN’s “State of the Union,” he said he is focused on his work in the Senate but did not dismiss the approach of religious activists in the Peach State.

“I think we all have to use our voices, and I have to tell you as the pastor of Ebenezer Baptist Church, I’ve seen these corporations falling over themselves every year around the time of the (Martin Luther) King holiday, celebrating Dr. King, and yes, I think that the way to celebrate Dr. King is to stand up for what he represented — voting rights,” Warnock said.

Various faith leaders have voiced opposition to the Georgia law as well. On Wednesday, a group of religious leaders marched to the Georgia statehouse and left water bottles as a symbolic protest. Others have suggested they may risk arrest in the future to offer water to people in line to vote.

Jackson said he hopes companies such as Coca-Cola, which owns Dasani water, will follow suit by providing water that could be passed out to voters.

“In June of last year, when they had the primary election, we had people in Atlanta who were in line six or seven hours waiting to vote,” he said. “You mean to tell me you cannot get people water or a snack? I think that is inhumane, and some of us are willing to put that to the test.”