(RNS) — Prince Philip, who died Friday (April 9) at age 99, was married for 73 years to the head of the Church of England, and it’s no surprise he identified for most of his life as an Anglican. But his religious profile was somewhat more complicated. Here are five faith facts to know about Britain’s longest-serving consort.

He was baptized in the Greek Orthodox Church

Before Philip and Elizabeth’s 1947 wedding, the Archbishop of Canterbury wrote to Elizabeth’s father, King George VI, discreetly suggesting Philip be formally received into the Church of England. Though related to Queen Victoria, Philip was the scion of the royal house of Greece, where he was born, baptized and lived for the first 18 months of his life.

By the time of his engagement to Elizabeth, Philip considered himself an Anglican and had attended Church of England services during his tenure as a lieutenant in the Royal Navy during the Second World War. However, he was still formally a Greek Orthodox.

“In the Church of England we are always ready to minister to members of the Orthodox Church and to admit to the Sacrament,” wrote then-Archbishop Geoffrey Fisher. “At the same time, unless he is officially received into the Church of England, he remains a member of the Greek Orthodox Church, which, though on the closest and most friendly terms with us, is not able to enter full communion with us.”

Decades later, British journalist Giles Milton wrote in The Spectator in 1992 that Philip, then 70, had revived his interest in Orthodox Christianity and held meetings with several Orthodox prelates, including the Russian Orthodox bishop for Great Britain and Ireland, Metropolitan Anthony Bloom (also known as Anthony of Sourozh).

After Philip’s father died, his mother, Princess Alice of Battenberg, became a nun, and in official family appearances can be spotted in her habit. A private chapel installed in Buckingham Palace for her “was hastily dismantled following her death in 1969,” Milton wrote. Her remains were buried at a Russian Orthodox convent in Jerusalem, as she had wished.

Buried beside Princess Alice is her aunt, a Russian Orthodox saint. 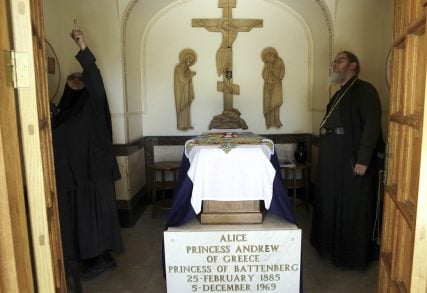 A Russian priest stands by the grave of Princess Alice of Battenberg and Greece, great-grandmother of Prince William, at the Mary Magdalene Church, in east Jerusalem, Wednesday, June 27, 2018.  (AP Photo/Mahmoud Illean)

Born to a noble family in Germany in 1864, Philip’s mother’s aunt Elisabeth married Tsar Alexander II’s son, Sergei Alexandrovich, and converted to Russian Orthodoxy from her childhood Lutheran faith. After Sergei was assassinated by a socialist agitator in 1905, Elisabeth publicly forgave him, asked he be pardoned and visited him in prison to convert him to Christianity.

In 1909, Elisabeth sold her jewelry and with the proceeds founded a convent and named herself abbess, but in the year following the Bolshevik Revolution in 1917, Vladimir Lenin ordered Elisabeth’s arrest, and along with several other relatives of the tsar, she was thrown into an iron mine. According to contemporary accounts, Elisabeth and her fellow victims spent their dying moments singing hymns.

She was canonized by the semi-autonomous Russian Orthodox Church Outside of Russia in 1981 and by the Moscow Patriarchate in 1992.

One of the most Philip-centric episodes of the Netflix series “The Crown” concerns Philip’s supposed midlife crisis, which he resolves by sitting in on a therapy group for burned-out Church of England ministers and taking part in the creation of a spiritual think tank at the royal family’s Windsor Castle estate.

The episode, while broadly rejected as fiction by knowledgeable royal watchers, has some basis in fact: Philip was involved in the creation of St. George’s House, though reportedly the conference center was chiefly the brainchild of the Rev. Robert Woods, whom the royals had invited to become the dean of Windsor Chapel in 1962, and whom Philip regarded as a friend.

One royal source has said that the center, which gathered prominent Britons from industry, science and other sectors to discuss religious and social issues, was instrumental to what he terms Philip’s “late-life religious awakening.” In an excerpt of a historical companion to “The Crown,” Robert Lacey wrote, “St George’s House clearly provided the long-needed dimension for which Philip had been searching in his spiritual life.”

His environmental work was a faith-based effort

Sometimes described as Philip’s “religious adviser” and his “guru,” Martin Palmer is officially the Secretary General of the Alliance of Religions and Conservation, a nonprofit founded by Philip in 1995. The two met a decade earlier, when both were working with the World Wildlife Fund, and Philip asked Palmer to host a meeting in Italy of representatives of Buddhism, Christianity, Hinduism, Islam and Judaism.

Philip’s partnership with Palmer has prompted some of the prince consort’s more controversial statements on faith. In 1990 he claimed the “ecological pragmatism of the so-called pagan religions” was “a great deal more realistic, in terms of conservation ethics, than the more intellectual monotheistic philosophies of the revealed religions.”

And though Philip is known for his more-than-awkward comments on race, Palmer describes ARC as an avenue for Philip to acquaint himself with beliefs from around the world, telling the BBC in 2017 that the prince consort has “a great affection for Daoists.” 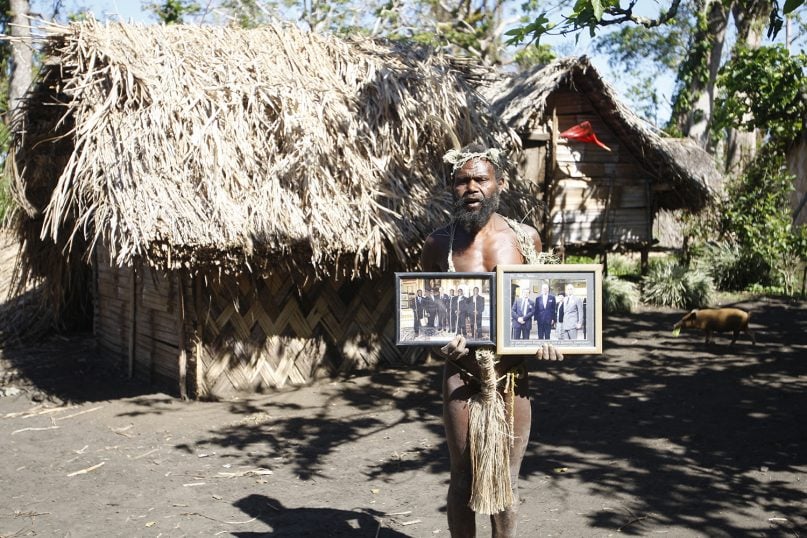 In this Sunday, May 31, 2015 photo, Albi Nagia poses with photographs of Prince Philip in Yakel, Tanna Island, Vanuatu. Nagia is part of a movement that worships the prince as the son of their ancestral God. (AP Photo/Nick Perry)

In a tiny village in the Pacific Island nation of Vanuatu, the locals have long revered Prince Philip as a divine being, based on a prophecy that a mountain spirit’s peripatetic son would one day return to the island in the company of his powerful wife.

ARCHIVE: Survey: UK teens are more likely than millennials to believe in God

One of several “cargo cults” in Micronesia and elsewhere in the Pacific that honor off-island visitors as deities, the islanders’ convictions about Philip’s divinity apparently grew in the first decade after he became consort, based on British colonial officials’ regard for the former Royal Navy officer. Their beliefs were bolstered when Queen Elizabeth and Philip arrived on Vanuatu in 1974.

A supporter of Jewish causes, he was the first British royal to visit Israel

Until 2018, the British royals were banned from visiting Israel, due to the United Kingdom’s long memory of Zionist violence against Britain’s governance leading up to the Jewish state’s declaration of independence in 1948. But in 1994, Philip broke with the ban, traveling as a private citizen to attend a ceremony honoring his mother as “righteous among the nations” by Yad Vashem, Israel’s Holocaust museum, for her efforts on Jews’ behalf in Greece during the Second World War.

With his death, leaders in Israel have remembered Philip as someone who took risks on their behalf for decades, citing his support for the Jewish National Fund and his willingness to speak to pro-Israel groups as far back as the 1960s, despite criticism.