(RNS) — A new poll of Britain’s Generation Z finds older adolescents and younger adults are more likely to believe in God than are millennials, the demographic ahead of them.

The survey, conducted by YouGov in late November, found that 23% of Britons aged 16 to 24 said they believe in God, with an additional 13% saying they believe in a “higher spiritual power.”

Both groups fell behind the general British population, 27% of whom overall say they believe in God.

According to The Times, the share of Gen Z members who claim to believe in God is up from 21% in January (when the question was asked of 18 to 24-year-olds), raising the possibility that some have embraced religious belief over the course of the ongoing pandemic caused by the novel coronavirus. 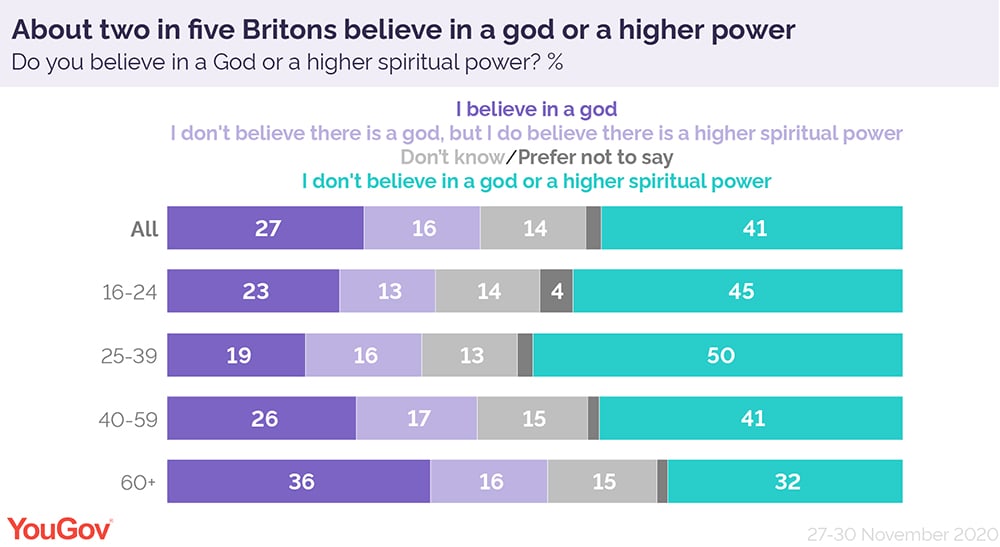 Landon Schnabel, a sociologist at Cornell University, observed on Twitter that teenagers are more likely to live at home with their family, which may contribute to them holding on to faith.

It was not immediately clear whether the poll suggests a significant or lasting shift toward religious expression for the group, or if the difference between teenagers and older millennials is evidence of a broader trend.

No parallel trend has been identified in the United States, according to Ryan Burge, a political scientist at Eastern Illinois University. Overall, a higher proportion of U.S. citizens own to a religious identity than in the United Kingdom, yet Burge pointed to 2018 data from the General Social Survey showing that people ages 18 to 24 remain noticeably less likely to believe in God than those ages 25 to 40.