(RNS) — During her long recovery from chemo, Mercy Haub would turn on episodes of “The Ellen DeGeneres Show” for a little bit of inspiration and laughter while she tried to catch up on homework.

Last week, the vibrant 16-year-old, whose mom is a pastor, returned the favor — providing inspiration and joy to DeGeneres during a virtual appearance on the popular daytime talk show.

“16-year-old Mercy Haub shaved her head to support cancer patients, and then was diagnosed with cancer herself,” Degeneres wrote on Twitter after the teen’s visit, along with a video clip. “I hope she brightens your day as much as she brightened mine.”

16-year-old Mercy Haub shaved her head to support cancer patients, and then was diagnosed with cancer herself. I hope she brightens your day as much as she brightened mine. pic.twitter.com/7EGXWJkKPR

Mercy’s cancer story caught the attention of the show’s producers after a video of her drive to her last day of treatment went viral. About 500 friends from school, church and the community lined the street leading from her home to the highway, wishing her well.

In the fall of 2020, Mercy, a junior at Shorewood High near Seattle, was diagnosed with stage 2 Hodgkin lymphoma, after months of not feeling well. The diagnosis came not long after Mercy had raised more than $30,000 for cancer research and had shaved her head in a show of support for cancer patients.

Mercy, who is now in remission, had been an advocate for cancer research since she was 7, after her best friend’s dad was diagnosed with colon cancer, which would eventually take his life. Since then, she’s raised money for research and done all she can to learn about the disease, in hopes of one day becoming an oncologist.

Her diagnosis was an unexpected twist in that story.

A soccer player and band member who was usually full of energy, Mercy had been feeling crummy for months. She and her mom had been to a number of doctors, with no luck. Then a pulmonologist suggested a CT scan, just to be on the safe side. The scan revealed her lymph nodes were enlarged. A biopsy revealed she had cancer.

“Literally, the whole world stops,” Mercy’s mom, the Rev. Erika Haub, told Religion News Service in a Zoom interview with her daughter. “Every day we would wake up and have to come to grips with it over and over again and remember that Mercy has cancer.” As a minister, Erika had much experience being at the hospital to visit sick church members — and had been in the room when a friend died of cancer. But being at her daughter’s bedside was more intense. And because of COVID-19, only one parent could be there with Mercy. And no other visitors. So during the long days after difficult chemo treatments, Erika wrote sermons by Mercy’s bedside, prayed for her healing and asked a million questions of doctors and nurses.

At the time, Erika was serving as the interim pastor at Newport Covenant Church, a congregation whose beloved former minister had died after a two-year battle with pancreatic cancer. In her role as interim, Erika was to help the congregation grieve and heal from the loss of a beloved pastor. Instead, her family was in need.

The church rallied around them, providing meals during Mercy’s treatment and surrounding them with love. People from their home congregation, Shoreline Covenant, also pitched in, as did friends, including a colleague from a church on the other side of the country. All told, the Haubs went six months without having to cook dinner.

RELATED: Survey: UK teens are more likely than millennials to believe in God

Mercy said she doesn’t remember much about the time she was hospitalized for treatment, blaming what she called “chemo brain” and the severity of the side effects. At one point, things went so badly she was unresponsive and had to be revived.

Determined to fight and to “live out loud,” Mercy posted photos of herself on Instagram during the months of treatment and recovering. She also wrote about the pain and fear of having cancer.

“I know what it means to be scared. To tremble at night, dreading test results and bad news,” she wrote in a poem titled “I Know What It Means,” which was inspired by the artwork of young cancer patients posted on the walls of the hospital where she was treated. “But I also know what it means to be brave. To walk with force and resolve into something I already know is going to be hell.”

During Mercy’s treatment, Erika was preaching through the Gospel of Matthew, which includes stories of Jesus healing the sick, including children. Mercy’s illness and treatment often made it into her sermons.

“I chose to share pretty vulnerably about how things were going,” she said. “I didn’t just put on a happy cheery face about cancer — I actually talked about what was hard and where there were unanswered prayers and suffering.” 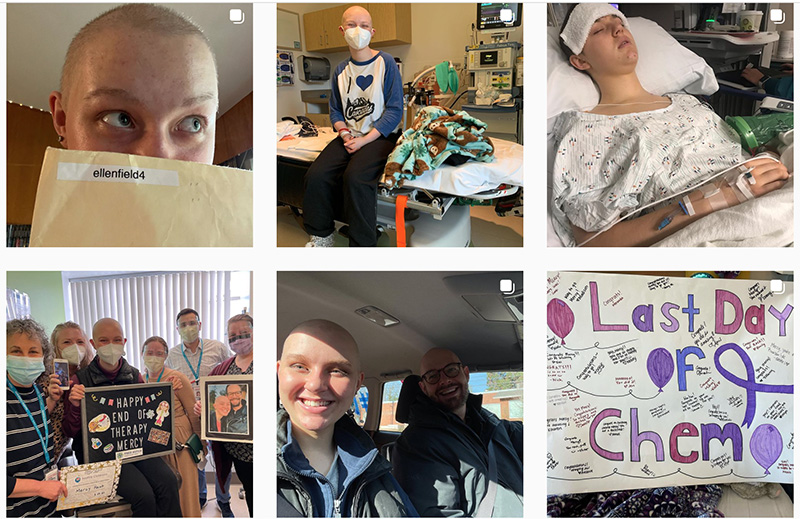 In a January 2021 sermon titled “God have mercy on my child,” Erika acknowledged that healing doesn’t always come, no matter how hard you pray.

“But I can answer this and I will go on record with this — Jesus is always merciful,” she said.

On her last day of treatment, Mercy said she dreaded going back to the hospital. She knew something was up when her car was parked out on the street, not in the family’s driveway. The family had decorated the car for the last day and that put a smile on her face.

As they got close to her high school, Mercy began to see crowds of friends holding up signs and wishing her well. Seeing so many people — after months of isolation — “melted my heart,” she said.

Since ending her treatment in March, Mercy has begun feeling normal again. She’s started playing the saxophone and clarinet again and is glad to be caught up in her class. She’s looking forward to reconnecting with friends and perhaps getting back to the Cascades, the Christian summer camp she’s been to for years. If COVID ever permits, she hopes to take DeGeneres up on an offer to attend her show in person at some point.

Mercy has also started running again, in hopes of rejoining the soccer team in the fall for her senior season — though she admits it’s going slow.

“It can be discouraging,” she said. “There’s also this triumph after every time I exercise — I am that much closer to being back to normal.”

News
Nightbirde, who shared music, message of hope on ‘America’s Got Talent,’ dies at 31
Follow us on Facebook!
Submit your photos to RNS