For one, there were a few more wigs on screen.

Hope Church celebrated Drag Sunday on Sunday (April 11) with a message by Ms. Penny Cost and music, readings and prayer by other drag artists from central Illinois and beyond.

“It is our way of celebrating and uplifting the voices of drag artistry within the church,” Ms. Penny Cost said during the service.

The service also came in response to pushback and questions the church has received over the past few weeks.

Simmons, 23, is the first openly gay man to be certified within the Illinois Great Rivers Conference and, as far as anyone can tell, the first drag queen certified in the United Methodist Church. 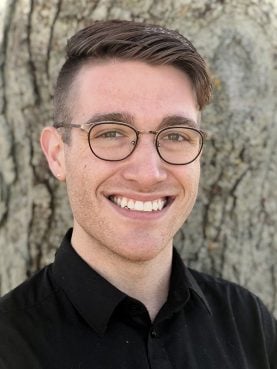 Isaac Simmons — who goes by Ms. Penny Cost in drag — is a candidate for ministry in the United Methodist Church. Courtesy photo

“It is mind-boggling simply that it’s 2021 and I’m the first, but also it’s incredibly humbling,” he told Religion News Service.

“For the amount of pushback and the amount of hate that I have faced — simply by existing, let alone for pursuing ordination — I have received, I’ve been poured into even more love and support,” he added.

Not long after the vote, Simmons’ story was picked up by conservative United Methodists.

“How many churches in their district or conference would be comfortable with a minister who is a drag queen? Would the people in the pews say his faith and works honor God and align with the Wesleyan tradition?” asked blogger Dan Moran of the Institute on Religion and Democracy.

The pushback that followed was scary, Simmons said. He wrote for the Reconciling Ministries Network blog that he has been called “the anti-Christ,” the “spawn of Satan” and — his favorite — “a bad copy of Jack Lemmon’s performance in ‘Some Like It Hot.’”

But Simmons said he also has received a lot of support from across the denomination.

Among those celebrating his candidacy is Jan Lawrence, executive director of Reconciling Ministries. Lawrence said that while she hasn’t met Simmons yet, she views him as “an example of someone we can learn from as we understand his story.”

“In my book, he is a rock star for being bold enough to open himself to the criticism that he is experiencing now,” she said in a written statement to RNS.

“The intersections of his faith, his queerness, and his performances as a drag queen may be questioned by some. Yet, he brings his full self to his ministry which is exactly what we expect of our pastors.”

The denomination, one of the largest in the U.S., is expected to consider a proposal to split when its global decision-making body, the General Conference, meets over nine days in August and September 2022 in Minneapolis. That meeting already has been postponed twice because of the ongoing COVID-19 pandemic.

Meantime, Simmons said, he sees his candidacy as “a sign of validation,” not only that he is seen, loved and called by God, but also the LGBTQ United Methodists he hopes will follow him.

“Queer folks, trans folks, people all over are seen loved and called, and I hope that it’s indicative of the change that is coming,” he said.

Simmons became a United Methodist while at Illinois Wesleyan University, where he is studying business management and religious studies.

He ran into Hope Church at Bloomington’s Pride Fest and thought, “If a church comes to support me, I need to go and support them.” He showed up that Sunday and never left. 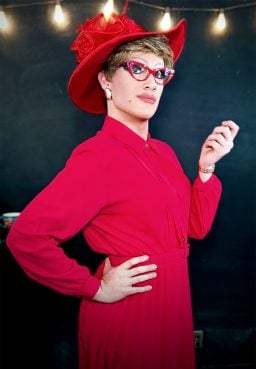 A “nerd at heart,” he said, he threw himself into Methodist history. The “love and grace” he sees at the foundation of Hope Church and the United Methodist Church appealed to him. So does the fact he believes that when the denomination “came out on the wrong side of history,” it then “worked to repair it and to change and to prevent it from happening in the future,” he said.

His studies brought him to drag, too, as he worked on a research project on the use of carnivalesque to subvert systems of oppression.

“For me, there is nothing more carnivalesque than drag, because it is something that is full of laughter and full of love, full of support, but also full of protest, full of change, full of demanding justice,” he said.

“And so it’s this beautiful art form that allows folks an opportunity to engage with darker topics such as theological oppression in a way that welcomes them into it and makes them feel as if they can do it without shame.”

Ms. Penny Cost is a “1960s church lady” who allows people to think about the ideas they have of a stereotypical churchgoer, Simmons explained.

Her name comes from the biblical story of Pentecost, a moment in the midst of fear and uncertainty when tongues of fire came to rest on Jesus’ disciples, they were filled with the Holy Spirit and they began to speak in different languages. She often wears bright red wigs — her own tongues of fire.

“For me, drag is my way of speaking in a new way to new people,” Simmons said.

RELATED: In this to the end’: LGBT United Methodists express hurt, hope after vote

Drag Sunday at Hope Church looked like “basically just a church service that just happened to be performed in drag,” Simmons said. The service featured special music written for the occasion by Sharon ShareAlike, a well-known drag artist, along with an offering and a benediction.

The message by Ms. Penny Cost continued the church’s sermon series on the life of Jesus based on the Gospel of Mark.

“Today we are living just a little bit more into this idea that the church is not defined by the four walls that make it up, but by the expansive acceptance of its heart,” she said.