(RNS) — Mayor Steve Vaus counts his days from April 27, 2019, when a gunman burst into a Chabad synagogue, killing one congregant, injuring three others and shattering the Norman Rockwell vibe of the small, Southern California town of Poway.

“When something like this happens so close to home, it’s seared in your memory,” Vaus told me on what he noted was Day No. 642.

Exactly six months before the Poway attack, Pittsburgh Mayor Bill Peduto was awakened by a call that an active shooter was inside the Tree of Life Synagogue in the city’s Squirrel Hill neighborhood. He immediately hung up the phone and prayed. “It hit very, very close,” he said. “I knew almost half of the families.”

RELATED: “I Will Never Forget That Day”: Poway’s Mayor on the Second Anniversary of the Chabad Shooting

These two mayors have seen firsthand the danger of an ancient hatred lying in wait. Amid a precipitous rise in hate incidents across the country, they want others to be mindful of the peril.

“When we see the real effects of antisemitism, we have to speak out and we have to be able to say this is a way that divides our community against itself,” Peduto said. “We need to be able to explain not only why it is wrong, but how we will do anything that is necessary to make sure that it does not exist.”

Ahead of the Poway shooting’s second anniversary, nearly 600 American city leaders, Vaus and Peduto included, have signed the Mayors United Against Antisemitism statement, an initiative of the U.S. Conference of Mayors and the American Jewish Committee.

A mayor’s job is to keep a city running — period. Mayors oversee garbage collection, potholes, bus routes and the safety of the people they serve, who are their neighbors. “When you run for state assembly or state senator, Congress or the United States Senate, you’re an awful long way from your constituents during most of your working time,” Vaus said. “That’s not the case with a mayor. I have to go to the grocery store and buy milk and eggs. So you better be there and be ready to address whatever the need is.”

Protecting houses of worship was already on Poway’s agenda after the Pittsburgh massacre. Vaus believes more lives would have been lost that Shabbat morning if the Chabad congregation had not hosted an active shooter training with sheriff’s deputies and law enforcement specialists after the Tree of Life attack.

Vaus arrived at the Poway synagogue moments after a gunman killed 60-year-old Lori Gilbert-Kaye, shot Rabbi Yisroel Goldstein in both hands  and wounded another worshipper and his 8-year-old niece. The assailant had fled when his gun jammed, but later, a 19-year-old self-proclaimed white supremacist surrendered to police. He is awaiting trial.

A country music singer who hails from a long line of pastors, Vaus had always considered himself the black sheep who didn’t follow in the footsteps of his grandfather, father and brothers. 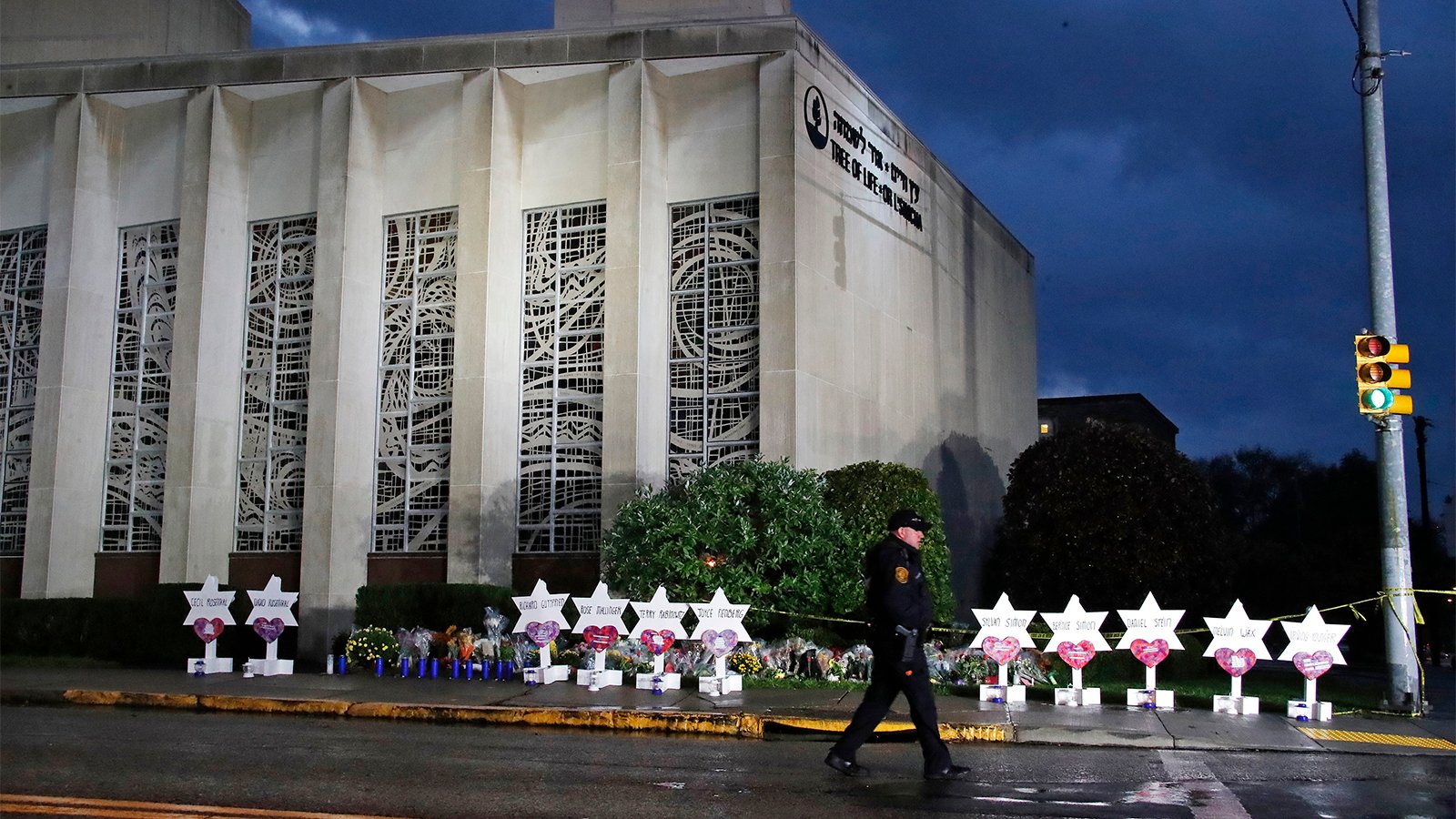 It’s a new role for many mayors. The U.S. Conference of Mayors boasts dozens of committees and task forces devoted to issues such as criminal justice, the environment, energy and homelessness. But in recent years, an unofficial committee has coalesced, made up of mayors whose communities have experienced a significant loss of life.

When an attack happens, members of this group spring into action, reaching out to colleagues with advice based on their own crushing experience. The most recent eligible colleague is Mayor Joe Hogsett of Indianapolis, where on April 15 a gunman opened fire in a FedEx warehouse, killing eight people, including four members of the Sikh community.

“I relied heavily within the first 48 hours on my fellow mayors,” Peduto said. “Since that time, I have become one of the mayors who’s on the phone after an incident occurs in another city. Unfortunately, our committee keeps growing.”

Hate incidents are undeniably on the rise across the U.S.  Jews are the most targeted victims of religiously motivated hate crimes, according to the most recent FBI Hate Crimes Statistics report. In addition, AJC’s 2020 State of Antisemitism in America report found that 76% of those targeted by an antisemitic attack or remark did not report it, clouding efforts to pinpoint the problem.

“My Jewish brothers and sisters, I’ve never seen them as separate and apart,” Vaus said. “But I’ve also never fully understood until the shooting, the fear that they live with, day in and day out.” 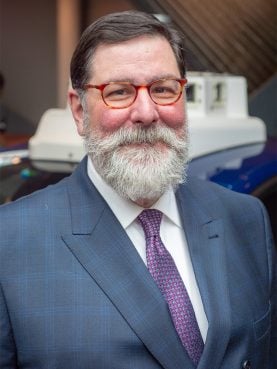 Peduto said years of veiled threats or acts of intimidation created a constant drumbeat of antisemitism. Still, no one could fathom what happened on Oct. 27, 2018.

That morning, at Sabbath services, an assailant yelling “All Jews must die” opened fire on worshippers inside the Tree of Life synagogue. He killed 11 congregants and injured two others, making it the deadliest attack on the Jewish community in U.S. history. In the immediate aftermath, that historic magnitude was lost on Peduto. All he knew was that friends and neighbors, many of them elderly, had been slain because they were Jewish.

“It was a personal trauma that went beyond being a mayor,” Peduto said. “Just being a friend to a lot of people who were about to receive the most horrific news that they can imagine. We were dealing with the deepest level of evil and that was the reality.”

Rabbi Jeffrey Myers, leader of Tree of Life, is keenly aware that during a pandemic, when so many other communities are hurting, antisemitism is one of many competing priorities for mayors. He appreciates the Mayors United pledge to combat anti-Jewish hatred, but stopping the scourge requires more, he said.

“You can’t legislate away the evil of antisemitism just because you sign a document,” Myers said. “The document reflects the hopes and aspirations of a city, but it doesn’t end there. It really starts in each and every home at the kitchen table. That’s where it’s born. That’s the bigger challenge.”

Born at the kitchen table and nurtured by today’s die-hard political rhetoric, Peduto said, referencing an inside joke among his colleagues about America’s three political parties: “Republicans, Democrats and Mayors.”

“In many cases, we are the only voice that people may hear from government that tries to find ways to bring us together,” said Peduto, a Democrat.

RELATED: Against the darkness: Remembering Pittsburgh’s Tree of Life shooting

Vaus, a Republican, said today’s polarized climate has put everyone on edge.

“I think we spend far too much time condemning and confronting one another and too little time just having conversation with one another,” he said. “It breaks my heart, the division that I see now, and I think in a sense, in these current times, many people are looking over their shoulders, wondering who’s going to come after them.”

(Manya Brachear Pashman is co-host of People of the Pod, an American Jewish Committee podcast about global affairs through a Jewish lens. She covered religion for the Chicago Tribune between 2003 and 2018. The views expressed in this commentary do not necessarily reflect those of Religion News Service.)