MUMBAI (RNS) — As COVID-19 infections rise in India, the local and national governments’ decision to allow a shortened edition of a festival known as Kumbh Mela is being scrutinized as a cause for some of the spread of the virus but also a sign of Prime Minister Narendra Modi’s BJP-led government favoring Hindu beliefs over safety.

Kumbh Mela, a Hindu festival that takes place on the banks of the Ganges River in Haridwar, in the hill state of Uttarakhand, was held through April, with two of its most sacred bathing days attracting millions. Typically lasting from January to April, it is held approximately once every 12 years, with the last edition held in 2010.

But the auspicious dates arrived earlier than usual this time, and the Kumbh was allowed to go forward in 2021 instead of next year. As a result, more than 9 million people in all are estimated to have gathered in Haridwar since the beginning of the year, but most of those — some 6 million — are thought to have come in April, just as COVID-19 was beginning to surge in India.

RELATED: ‘We need a place to serve’: As India’s COVID-19 cases spiral, faith groups step up

“One component of the festival’s timing is the position of Jupiter in the zodiac,” said James Lochtefeld, a professor of religion at Carthage College who has written extensively on Hindu pilgrimages. “If Jupiter’s revolution around the sun was exactly 12 years, the festival timing would never vary. But since it is actually 11.86 years, during each successive 12-year cycle Jupiter moves a little further into the sign,” he said. About once a century, as in this year, the festival takes place only 11 years after the last.

According to Hindu belief, during a tussle between the gods and demons over a pot of immortal liquid, a few drops splashed in four earthly spots along the Ganges — Haridwar, Nashik, Prayagraj and Ujjain. These cities became pilgrimage sites of the Kumbh, with each mela’s timing determined by different astral configurations. The dates of the festivals, however, are not a matter of Scripture but of Hindu tradition, according to historian DP Dubey.

It was clear long before COVID-19 struck that the Kumbh would fall in 2021. “This is dependent on planets. No individual can say you can celebrate tomorrow or the day after. You can’t move it back and forth,” said Pradeep Jha, the head of Ganga Sabha, a priestly body in Haridwar. Jha stressed that health and safety were important and that people should celebrate in a measured manner until COVID-19 recedes. 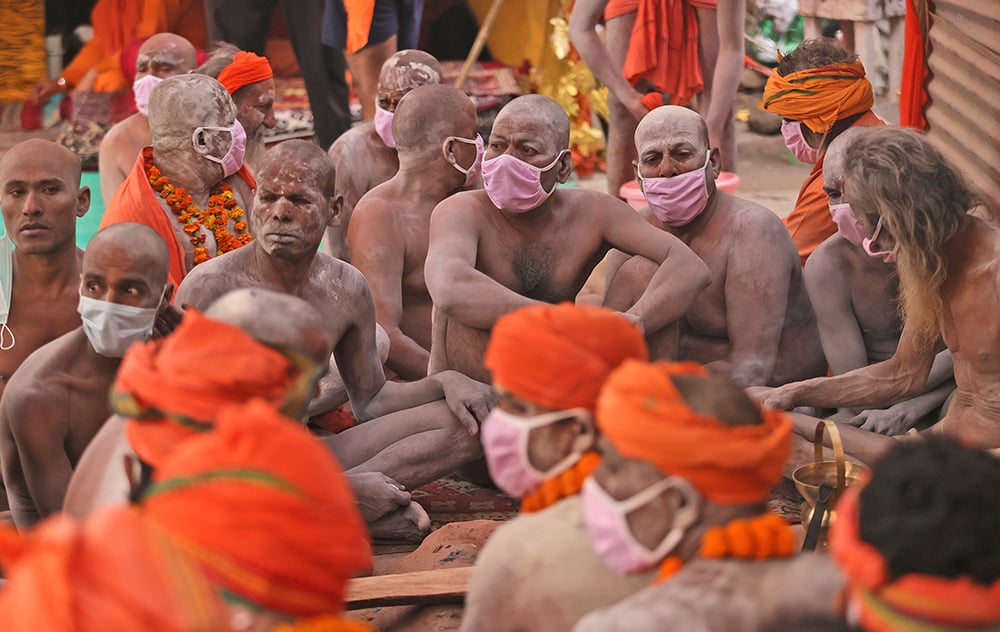 Naga Sadhu, or Naked Hindu holy men, wait for the start of a procession toward the river Ganges during Kumbh Mela, in Haridwar, in the Indian state of Uttarakhand, Monday, April 12, 2021. As states across India are declaring some version of a lockdown to battle rising Covid cases as part of a nationwide second-wave, thousands of pilgrims are gathering on the banks of the river Ganges for the Hindu festival Kumbh Mela. The faithful believe that a dip in the waters of the Ganges will absolve them of their sins and deliver them from the cycle of birth and death. (AP Photo/Karma Sonam)

But while astrology determined when the Kumbh would take place, the government has the final say, as the logistics of one of the world’s largest religious gatherings can only be put in motion with official cooperation. “The akhadas do have status and prestige, and this counts for something,” Lochtefeld said, referring to the Hindu ascetic groups, “but the state has the money and the power that actually determine how the events are going to happen.”

This includes bathing schedules, living arrangements and other amenities for millions of visitors.

Since the pandemic hit India last year, furthermore, it had become increasingly clear that the Kumbh would likely be different from usual. The start date of the Kumbh was initially moved from January to Feb. 27, then to April 1. “It’s a false choice to imagine that the government had to simply ban participation or allow the Kumbh to continue,” said Tulasi Srinivas, a professor of anthropology, religion and transnational studies at Emerson College. “We had last year to prepare.

“Religious festivals like the Kumbh that involve bathing and commensal eating and living conditions are very dangerous for spreading this deadly illness,” Srinivas said. “I suspect that canceling it or changing it might have meant alienating certain akhara (or akhada) groups, but we had lead time to educate the public about the risks and problems.”

Responding to whether an alternative timing was possible, Deepak Rawat, the state’s top official overseeing the festival, said, “The Kumbh is an astrological event, not the Olympics.”

Former Uttarakhand Chief Minister Trivendra Singh Rawat, who resigned from office on March 9, reportedly wanted a muted festival, but in December, Narendra Giri, the chief of the akhadas’ body, said they would hold a full-fledged mela regardless of the state’s support.

“The seers, godmen and akhadas were unhappy with Trivendra Singh Rawat; they felt he was not making arrangements, not spending enough,” said Avikal Thapliyal, a journalist in Uttarkhand, adding that the pressure from the religious leaders was a factor in the chief minister’s resignation.

In February, Pradeep Jha was reportedly among those irked with the government for delaying its announcement on the specifics of the Kumbh. Giri, reached by phone, hung up, saying he was unwell, having been hospitalized with COVID.

After Trivendra Singh Rawat’s successor took charge as chief minister, the government’s tone seemed to change. Two days after being sworn in, the new chief minister organized a flower shower on devotees from a helicopter. He released a statement on March 14 saying the government was committed to making the mela “grand.”

It also promised that, while precautions would be followed, there would be “no inconveniences” to devotees, and no one would be “deprived” from bathing in the Ganges. These statements were well-received by akhadas. 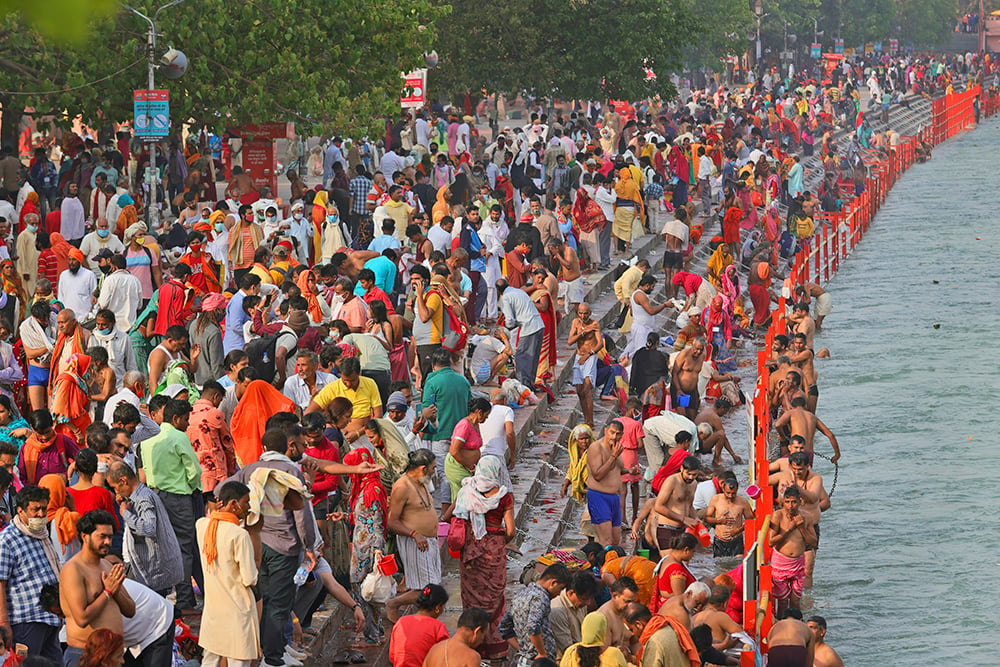 Though there were holy days for dipping in the Ganges before April 1, the Uttarakhand state government announced the Kumbh dates as April 1 to April 30. Over the past several weeks, the government told the court that mandatory testing, thermal scans and medical services were all in place. Standard operating procedures were laid down by national and local authorities.

But COVID-19 infections continued to grow through April in the state. Five hundred fresh cases were recorded on April 1, reaching a high of 6,251 on April 29. Between April 10-14, 1,701 people tested positive for COVID-19, the Press Trust of India reported. On April 15, the state government announced new restrictions, including a cap of 200 people for gatherings of any kind. The Kumbh, however, was exempted.

When asked about the advisability of holding a Kumbh now, Deepak Rawat, the official overseeing the festival, said the festival was run according to accepted health guidelines and that entry was granted only to those with a negative COVID-19 test. But photos showed thousands dipping in the Ganges, with little social distancing or masking.

“Death is certain one day for everyone, but we must follow our traditions,” said one akhada chief.

On April 17, the prime minister eventually asked devotees to observe the festival in a “symbolic” manner. By April 20, at least 62 seers had tested positive and six akhadas had pulled out of the Kumbh. One akhada chief had died from COVID-related complications.

The Kumbh has a long and well-documented history with disease outbreaks, which occurred in 1783, 1895 and 1906. “Indeed the Kumbh has been a superspreader event historically, of plague, cholera and other epidemic diseases,” said Srinivas. “The British understood this and tried to regulate bathing schedules and widen the access to the Ganga (or Ganges) at Haridwar to prevent crowding.”

There is no known precedent for the Haridwar Kumbh being canceled or delayed. In 1942, the annual Prayagraj Magh Mela was canceled by the British due to a threat of Japanese bombing.

But when outbreaks of the plague came in the late 1890s, they didn’t coincide with the Kumbh. “It is hard to tell what the authorities would have done had this been the case,” Lochtefeld said, noting that while some authorities of the time favored canceling festivals, “others were extremely reluctant to interfere with religious matters.”

(Editor’s note: COVID-19 numbers have been updated to reflect the most recent number of cases as of April 29, 2021.)