SAN GABRIEL, Calif. (RNS) — A man has been charged in connection with a fire last July that destroyed the rooftop of a church at the historic San Gabriel Mission, the fourth in a series of missions across California that Catholic priest Junipero Serra founded during the Spanish colonization era.

John David Corey, 57, faces two felony counts of arson of an inhabited structure and one count each of arson during a state of emergency, first-degree residential burglary and possession of flammable material, Los Angeles County District Attorney George Gascón said in a news release.

At a news conference outside the mission on Tuesday (May 4), fire authorities would not give further details on the potential motive behind the fire. A total of 85 firefighters from different agencies fought the blaze, including a San Gabriel firefighter who suffered non-life-threatening injuries, authorities said. No one else was injured in the fire that officials said lasted more than two hours.

“As a team, we collectively determined the fire to be arson,” said Capt. Jason Sutliff of the San Marino Fire Department and the lead investigator of the case.

Corey is currently serving a three-year prison sentence for an unrelated arson that took place in San Gabriel a few days after the fire at the mission, Sutliff said.

“It was during the course of the investigation of that arson that Mr. Corey became a person of interest in the mission fire,” Sutliff said.

Sutliff said Corey will be arraigned May 18 and potentially faces up to 14 years in state prison. 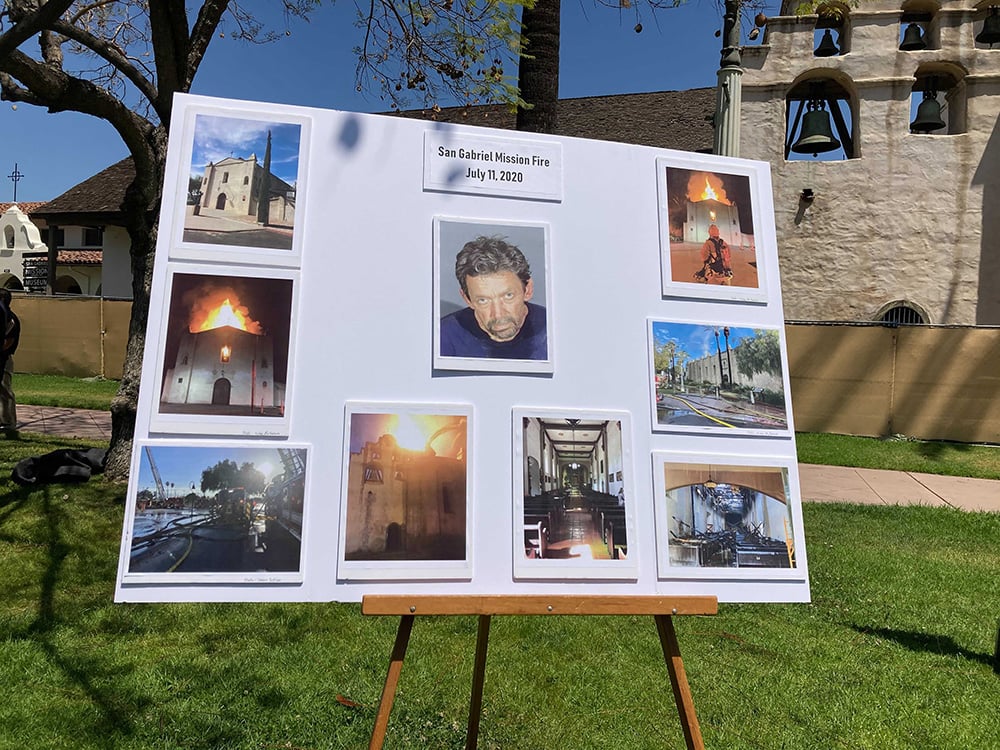 A board displays a mugshot of John David Corey, center, who has been charged in connection with the July 2020 fire that destroyed the rooftop of the San Gabriel Mission, officials said during a news conference May 4, 2021, in San Gabriel, California. RNS photo by Alejandra Molina

Much of the church’s interior was damaged, but because the building was going through renovations in anticipation of the mission’s upcoming 250th anniversary, historic paintings and other artifacts had been stored elsewhere and were spared from the fire.

However, the reredos (an ornamental screen behind the altar) was damaged, as were a number of statues, including ones depicting St. Gabriel the Archangel, St. Anthony of Padua and St. Dominic, Terri Huerta, a spokesperson for the San Gabriel Mission, previously told Religion News Service.

A local restoration fund has so far raised more than $300,000 for the mission, Huerta told RNS on Tuesday. The Los Angeles Archdiocese is also raising funds.

The fire occurred amid public scrutiny of Serra, an 18th-century Franciscan priest, who was canonized by Pope Francis in 2015. While credited with spreading the Catholic faith on the West Coast, Serra is viewed by many as the agent of an imperial conquest that enslaved Native Americans.

The Rev. John Molyneux, pastor of Mission San Gabriel, said the close-knit parish community has been “rocked by this incident.”

“For many lifelong parishioners, the fire has been a little death, but we are resurrection people and we look ahead to the future with a renewed sense of hope and purpose,” said Molyneux, who was at the news conference. 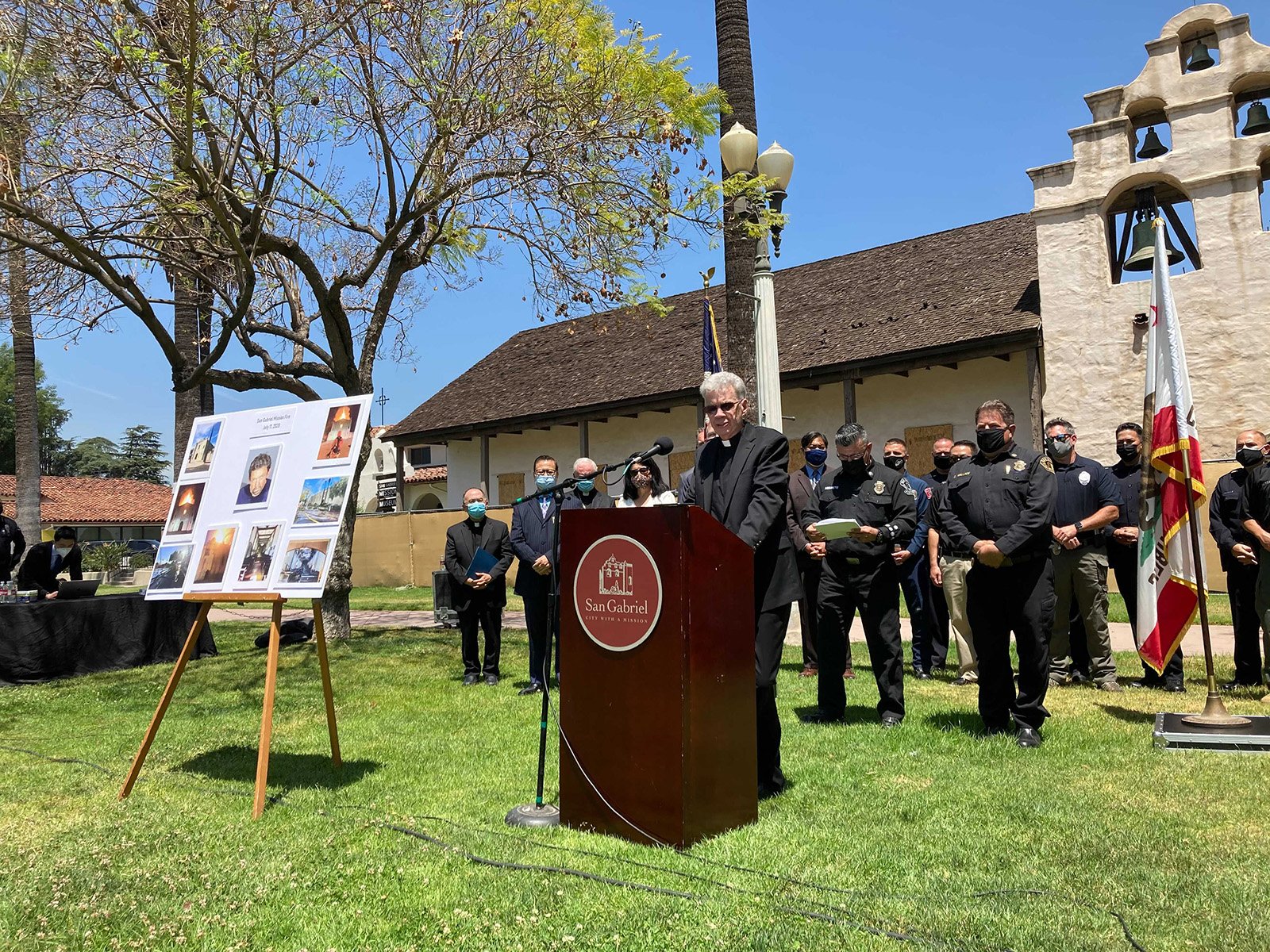 The Rev. John Molyneux, pastor of San Gabriel Mission, said the parish community has been “rocked by this incident,” during a news conference May 4, 2021, in San Gabriel, California. RNS photo by Alejandra Molina

The pastor said officials hope the newly designed roof will be finished by the end of August, just in time for the mission’s 250th anniversary celebration on Sept. 11.

The fire not only ignited Catholics to stand in support of the church, but also caused concern among Native people and scholars who worried the flames destroyed Indigenous artifacts and the structure itself, which was built by the Tongva people.

Yve Chavez, a professor at UC Santa Cruz, previously told RNS she feared the fire could have damaged more artwork. She said that according to other scholars, there were murals created by Native people within the church that had been painted over at some point in history. “More research needs to be done to investigate that element,” she said.

This particular church at the San Gabriel Mission was one of a few built out of stone instead of adobe, said Chavez, whose research focuses on Indigenous art of Southern California and the missions. The architecture was not meant to withstand an earthquake-prone environment and, as a result, had been damaged over the years, she said, noting the roof that burned was not original to the structure.

“What we see now post-fire and even before the fire is not reflective of what Native people would have experienced way back in the late 18th and early 19th centuries when the Franciscans had control over the missions,” Chavez said. “It is an old building, but it has certainly gone through various phases of restoration.”