SAN GABRIEL, Calif. (RNS) — Authorities are continuing to investigate a Saturday morning blaze that destroyed the rooftop of a church at the historic San Gabriel Mission, the fourth in a series of missions across California that Father Junipero Serra founded during the Spanish colonization era.

Much of the church’s interior was damaged, but because the building was going through renovations in anticipation of the mission’s upcoming 250th anniversary, historic paintings and other artifacts had been stored elsewhere and were spared from the fire. No one was injured.

However, the reredos (an ornamental screen behind the altar) was damaged, as were a number of statues, including Saint Gabriel the Archangel, Saint Anthony of Padua and Saint Dominic monuments, said Terri Huerta, a spokesperson for the San Gabriel Mission. A fire restoration fund has already been set up for the mission.

The fire occurred amid public scrutiny of Serra, an 18th-century Franciscan priest, who was canonized by Pope Francis in 2015. While credited with spreading the Catholic faith on the West Coast, Serra is viewed by many as the agent of an imperial conquest that enslaved Native Americans.

San Gabriel Fire Capt. Paul Negrete said the toppling of the Serra monuments will be a factor in the investigation.

The mission had recently relocated its Serra statue to protect it from potential vandalism. Negrete on Monday told Religion News Service that investigators were still reviewing video from a security camera that scanned the area directly in front of the mission, where the statue of Serra previously stood.

Investigators were also reviewing video captured from a Ring camera of a resident who lives nearby, Negrete said.

On Sunday, Archbishop José H. Gomez celebrated Mass at the chapel next to the burned sanctuary.

“This fire changes nothing,” Gomez said during his homily. “Mission San Gabriel will always be the spiritual heart of the church in Los Angeles, the place from which the gospel still goes forth.”

Gomez has staunchly defended Serra as a priest who advocated for the Native people. 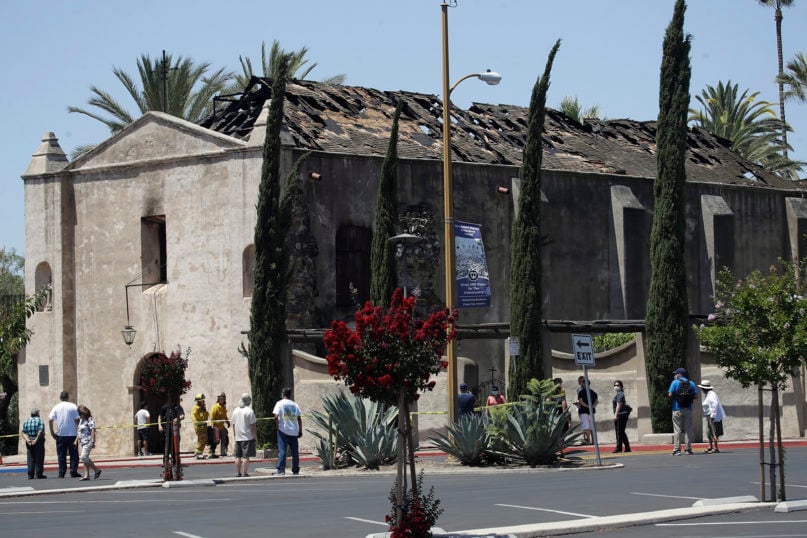 Curious onlookers stand outside the San Gabriel Mission in the aftermath of a morning fire Saturday, July 11, 2020, in San Gabriel, California. The fire destroyed the rooftop and most of the interior of the church that was undergoing renovation. (AP Photo/Marcio Jose Sanchez)

The fire has not only ignited Catholics to stand in support of the church, but also caused concern among Native people and scholars who worried the flames destroyed Indigenous artifacts and the structure itself, which was built by the Tongva people.

Yve Chavez, a professor at UC Santa Cruz, feared the fire could have damaged artwork that needs to be further studied. She said according to other scholars, there were murals created by Native people within the church that had been painted over at some point in history. “More research needs to be done to investigate that element,” she said.

This particular church at the San Gabriel Mission was one of a few built out of stone instead of adobe, said Chavez, whose research focuses on Indigenous art of Southern California and the missions. The architecture was not meant to withstand an earthquake-prone environment and, as a result, had been damaged over the years, she said, noting the roof that burned was not original to the structure.

“What we see now post-fire and even before the fire is not reflective of what Native people would have experienced way back in the late 18th and early 19th centuries when the Franciscans had control over the missions,” Chavez said. “It is an old building, but it has certainly gone through various phases of restoration.”

Even so, as a descendant of Tongva, Chavez expressed concerned about the fate of the church structure.

She said these buildings are unique to California.

“It’s the Native people who did the work. They were the ones who found the materials. They would have had to quarry the stone to build the stone walls. … It’s really the product of Indigenous labor and their ability to adapt to new construction techniques,” she said.

“As a Native person whose ancestors lived and worked and died at this mission, I was upset to think that something my ancestors built would no longer be there for us to recognize,” Chavez added.

On Sunday, a number of people gathered outside the church to pray and reflect on what the mission means to them.

“I’m outraged,” said Manuel Soriano, who is Catholic and grew up near the mission.

He said Catholic lay people need to unify against what he described as anti-Catholic sentiment and secular views that endanger traditional values on marriage and sexuality.

“Us the laity, the common people, we’ve been silent on this. We haven’t been speaking for the truth,” he said. “It’s time to fight back.”

Soriano admits the Catholic Church and the mission system have a “nuanced and mixed history,” but he stands by Serra as a “defender of the Native Americans and Indigenous people.”

“I’m empathetic toward both sides and I like having a discussion, but I think a lot of people are in a place that are past discussion and are jumping to conclusions,” he said.

While the cause of the fire remains unknown, Colleen Mackenzie, a docent at the San Gabriel Mission, thinks the blaze and the toppling of the statues are connected.

“I feel very sad that this happened, but it will be rebuilt because this is a community of faith,” she said.

Mackenzie said she has no doubt the parish community will move forward from this.

“This is a large parish. Further than that, this is so much of history that a lot of people will contribute to it,” she said.

Huerta, the spokesperson for the San Gabriel Mission, said the community has deep ties with the mission.

“But everyone here is so resilient,” she added. “They want to help in any way possible.”

As the archbishop walked outside the mission on Sunday, a crowd of Catholic women swarmed him and gathered for a blessing.

A woman told Gomez they will sell whatever it takes to raise money for the church, including tamales, pozole and atole.

“We’re going to fight for this temple. It will soon rebuild,” she told the archbishop.