BERLIN (RNS) — In an early scene from last year’s darkly comic film “Masel Tov Cocktail,” the teenage protagonist, Dimitrij “Dima” Liebermann, is lounging in a German city park, reflecting on how he broke the nose of a classmate who insulted him for being Jewish.

“You got that right, I am a Jew,” Dima tells the viewer, with a vulgarity (missing here) for emphasis. “A real, living Jew.”

Described as “the best short film on the subject of antisemitism today,” the movie reveals a different side to Jewish life in Germany than the cliches often seen on screen or in historical archives.

RELATED: Scuba diving rabbi adopts the ocean as his part of the world to repair

Its representation seems to have hit a nerve at a time when Germans are looking back on 1,700 years of Jewish history, dating back to a decree in 321 from Roman emperor Constantine allowing Jews to be appointed to the governing body in Cologne, long before Germany came together as a nation.

The anniversary is not only helping Germans confront painful aspects of the past, but to appreciate the realities of its contemporary Jewish community. Raised on a steady stream of World War II and Holocaust films, in which Jews are almost exclusively presented as victims, some Germans are encountering for the first time what the long, complex history of Jewish life in Germany has entailed. 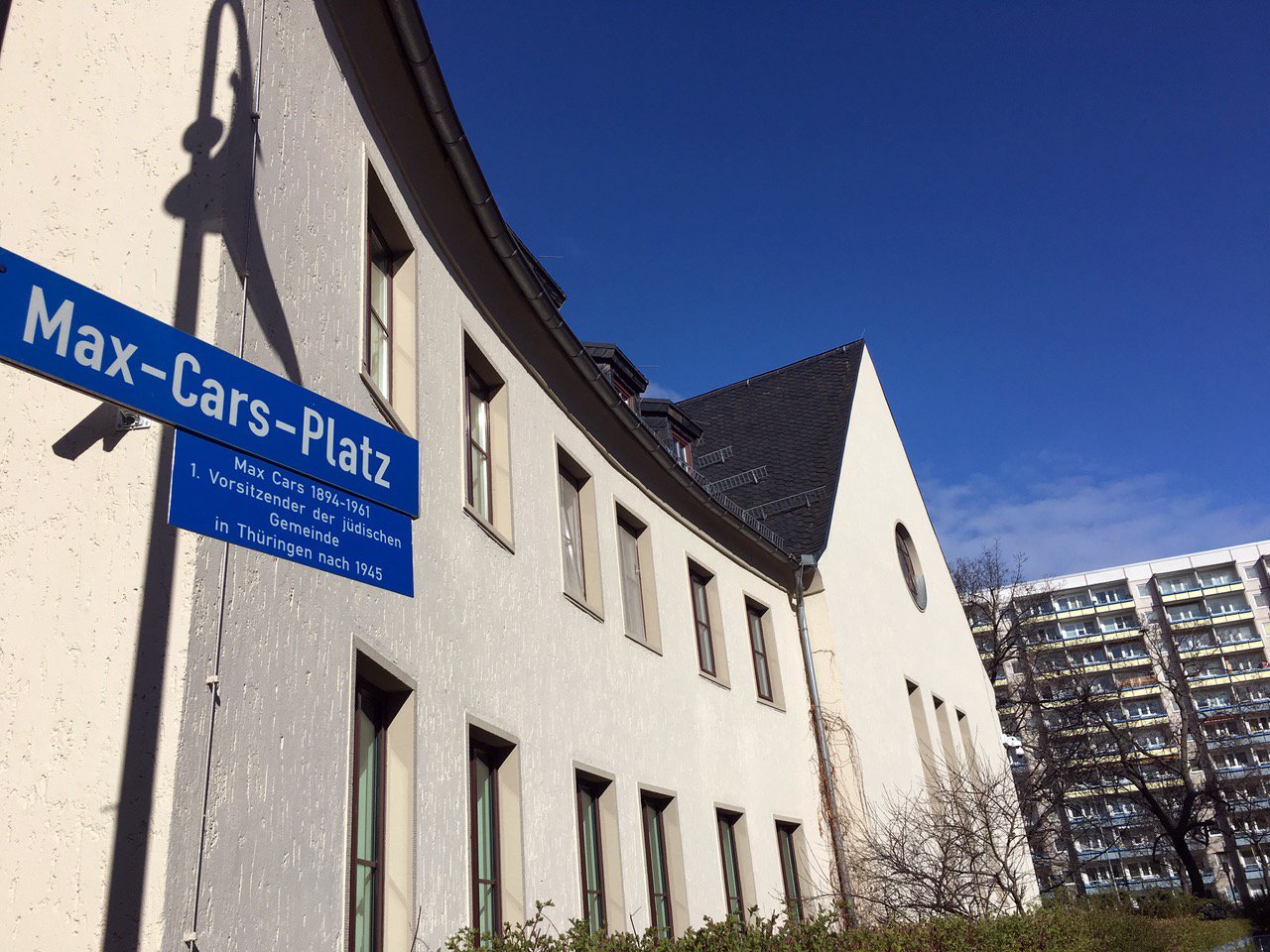 The New Synagogue in Erfurt, Germany. Photo by Ken Chitwood

Manfred Levy, director of education at the Jewish Museum in Frankfurt, said that if people can get past hackneyed ideas, they will find a “very active community with different streams of life, narratives, beliefs, and rituals.”

“Here, there are Orthodox Jews and liberals,” he said, “Jews who migrated from the Soviet Union and those with family histories that stretch back generations in Germany.”

Counting religious and secular Jews, Germany’s Jewish population is 225,000 strong, the third largest in Europe. According to the Central Welfare Office for Jews in Germany, or ZWST, there are 106 active Jewish communities, the largest in Berlin, Munich and Frankfurt.

Still, Levy acknowledged, that “isn’t that much” in a country of 83 million. That makes it hard for non-Jewish Germans to get to know Jews in everyday life.

Add to that the fact that antisemitism in Germany is anything but history.

Amid a general rise in antisemitic hate speech across Germany, a February 2021 police report revealed a recent escalation in antisemitic hate crimes, with more than 2,275 incidents in 2020. In December, a man was sentenced to life in prison for an attack on a synagogue in the city of Halle that left two people dead. 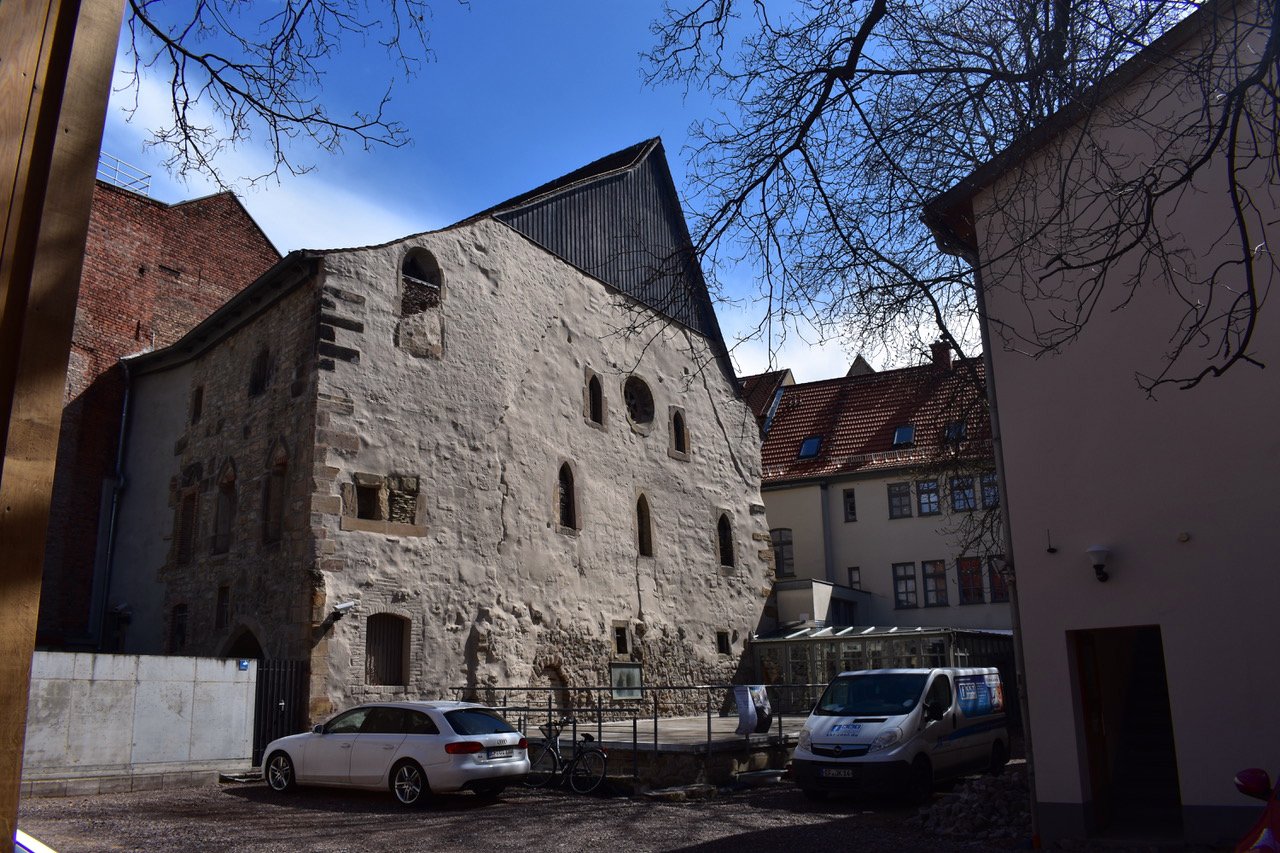 The Old Synagogue in Erfurt dates back 900 years. Photo by Ken Chitwood

The central state of Thuringia offers a unique perspective on the vibrancy and vexations of German Jewish life, past and present.

Thuringia bears a proud history of “Jewish contributions in religion, science, culture and the economy,” said Reinhard Schramm, chairman of the state’s Jewish community, which turns 900 this year.

Thuringia is marking the anniversary with a yearlong series of lectures, concerts, a summer festival and the writing of a new Torah scroll for the Jewish community of Thuringia, donated by the German Protestant and Catholic churches.

It’s also highlighting significant sites across the state, the centerpiece of which is a largely intact Old Town in the capital, Erfurt, where the once robust Jewish community left behind a treasure of coins, goldwork and jewelry, a medieval mikvah (bath used for ritual purification) and a 900-year-old synagogue.

Maria Stuerzebecher, the researcher leading Erfurt’s effort to attain UNESCO World Heritage status for its ensemble of sites, said Jewish merchants were key figures in medieval Erfurt and the city, in turn, was attractive as a central location for trading.

That community, however, was wiped out by a pogrom in 1349, at the height of the Black Death, when Jews became scapegoats.

It wouldn’t be until the 19th century that Thuringia’s Jewish community would recover, said Stuerzebecher. Then, “they built a network throughout the region, from Berkach in the south of Thuringia to Nordhausen in the north, founding some 34 communities.” 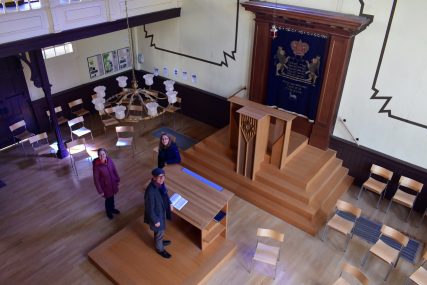 The interior of the restored 19th-century synagogue in Mühlhausen, Germany. Photo by Ken Chitwood 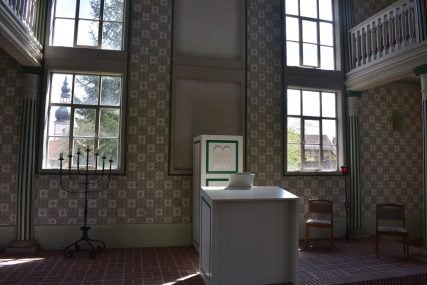 The interior of the restored 19th-century synagogue in Berkach, Germany. Photo by Ken Chitwood

Evidence of these communities exists today, in towns such as Mühlhausen and Berkach, each with beautifully restored 19th-century synagogues that survived the Holocaust, or Shoah, when Nazi Germany and its collaborators systematically murdered some 6 million Jews.

The culture of remembering the Holocaust is also vital in Thuringia, from the memorial at Buchenwald concentration camp, a half-hour drive east of Erfurt, where 56,000 people perished, to hundreds of Stolpersteine (stumbling stones), which mark the spots where Jews were taken from their homes or places of business across the state.

At Topf & Sons, an Erfurt engineering firm that helped build incinerators for Buchenwald and Auschwitz, there is a museum that takes stock of how the Jews’ fellow citizens took part in the Holocaust’s horrors. Annegret Schüle, director of the museum, said, “It’s important to show people the concrete history so that it doesn’t happen again.”

The challenge with remembrance, however, is making sure that “Jewish life” in Germany isn’t just a specter of the past.

Schramm said: “It’s important that we do not talk only about the murdered Jews, even though we will never forget them. We need to show the extraordinary achievements of Jews in and for Germany.”

This desire is echoed by Rabbi Alexander Nachama, who has been leading Thuringia’s Jewish community of 600, stretched across towns up to 100 miles apart, since 2018. 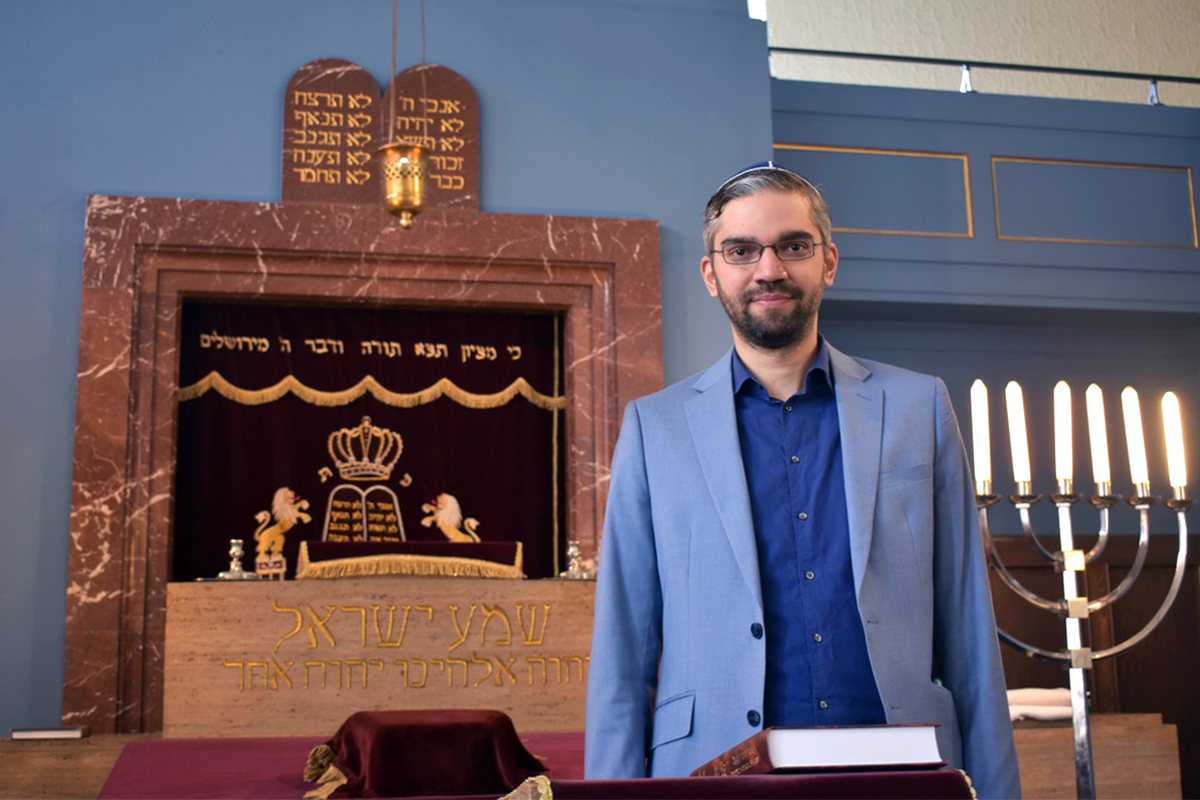 “The great architectural heritage and the long history of the Jewish community in Erfurt are quite extraordinary,” he said. At the same time, he wants to create a bridge between the past and the present, making the normality of Jewish life more visible and well-anchored in society.

“It’s not that nobody is interested,” said Nachama, “but hardly anyone knows about it in any case. It’s not like you have a Jew in your daily lives; you can’t. We don’t have enough members.”

Although Nachama is trying to strengthen the community with family celebrations, a stronger internet presence and the creation of a Jewish kindergarten, he knows that attracting young people — half his congregation is over 60 — is about more than activities.

Levy of the Jewish Museum said young German Jews want to escape their community’s bleak history. “I still feel the heritage of the Shoah myself,” he said. “The need to fight against antisemitism and racism, this is part of my identity. For young people, they don’t have the ‘spirit of the Shoah’ so much; it doesn’t bind them.

“They can open their horizons when they ask, ‘What is my Jewish identity in Germany?’”

Opening horizons is exactly what Helene Shani Braun aims to do.

A young, queer, Jewish theology student working to become a rabbi at Abraham Geiger College at the University of Potsdam outside Berlin, Shani Braun is also busy with guest appearances on the new show “Friday Night Jews” and with her popular Instagram feed, described by German magazine Der Spiegel as “a mixed bag of Torah scrolls, Queer Pride flags, and snapshots from the streets of Berlin.” 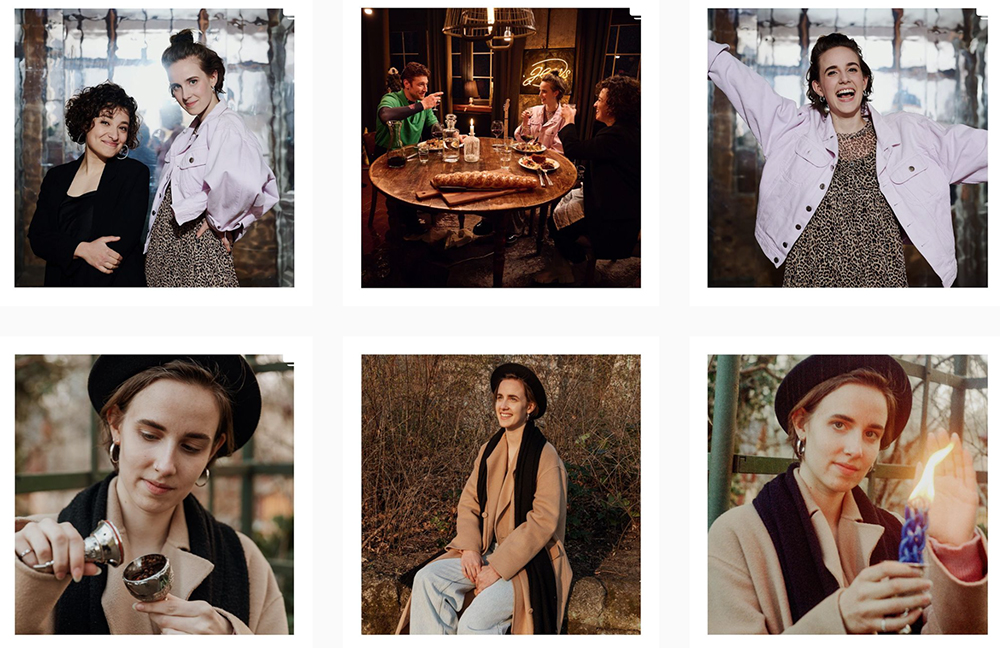 “I want to help rebuild liberal Judaism in Germany and show what living Judaism looks like today: diverse, colorful and multidimensional,” she said.

That notion of a German living Judaism was captured in that early scene from “Masel Tov Cocktail,” when, after a series of pictorial stereotypes about Jews and Germany — from Anne Frank to Einstein, the portals of Auschwitz concentration camp to antisemitic propaganda — flashed across the screen, the camera settles back on Dima, who says, “In most German movies, Jews are only shown in black and white. We rarely strike back.”

Cutting back to when he punched his classmate in the face, Dima says, “This is not that kind of movie.”

For many Jews in Germany, the historical markers, info centers and places of remembrance don’t reflect their current life.

As Shani Braun put it, the struggle is not only for the past, but for the present of Jewish life and its future. “My family comes from Germany, it is my history,” she said. But, more vital to her is fighting for German Jewish life — in all its diversity — to continue to exist for years to come.