(RNS) — Uptown Greenville, North Carolina, hosted its first evening street festival on the last day of April, hoping to bring the community together in the wake of COVID-19 lockdowns. As the “Snack, Shop, Sip” event began, local metaphysical shop owner Heron Michelle set up a tarot reading table in front of her store, The Sojourner Whole Earth Provisions, where she sells healing herbs, crystals, candles, jewelry and books on spiritual, mostly pagan, subjects.

After only a few readings, Michelle was approached by two young adults wearing identical green T-shirts offering to share the gospel of Jesus.

“Why do they always assume that I haven’t heard of Jesus?” Michelle asked in a phone interview.

Metaphysical stores are not only retail shops. They are also spiritual centers that offer classes and lectures, ritual space and spiritual counseling, even lending libraries. For those in marginalized religions, metaphysical stores often stand in as community centers, similar to a church or temple.

They are also perceived, especially by conservative Christians, as exotic, devoted to the so-called dark arts and, often, a threat.

It’s frequently those Christians who threaten the stores. A practicing witch and pagan priestess, Michelle was raised in Southern Baptist and other evangelical churches. “Oh honey,” she told the teens, “I was baptized in three different Christian faiths and none of them took.”

As the pair talked, Michelle became increasingly frustrated. She was used to being approached by Christians wanting to proselytize or simply object to her practice, but they were usually older, and predominantly male. These two were “sweet young kids,” she said, who reminded her of herself at that age. She knew the language they were speaking.

She explained that she had found “the divine love that Jesus Christ was trying to bring to the world” outside of Christianity. In the faith she subscribed to now, she explained, “proselytizing was a cardinal sin.” The two left, but Michelle closed up her table and didn’t offer any more readings.

But the Christian evangelists, it turned out, were part of a larger mission group that had spread through the festival, talking to shop owners and festivalgoers. Later that evening, the entire group gathered in front of Michelle’s store, blocking the entrance and staring.

Michelle had been here before. When she opened The Sojourner in 2008, local church organizations organized a boycott, and, shortly after, a group of women drew crosses on the store’s windows with oil. The manager heard them chanting outside, “shouting out demons,” Michelle said. 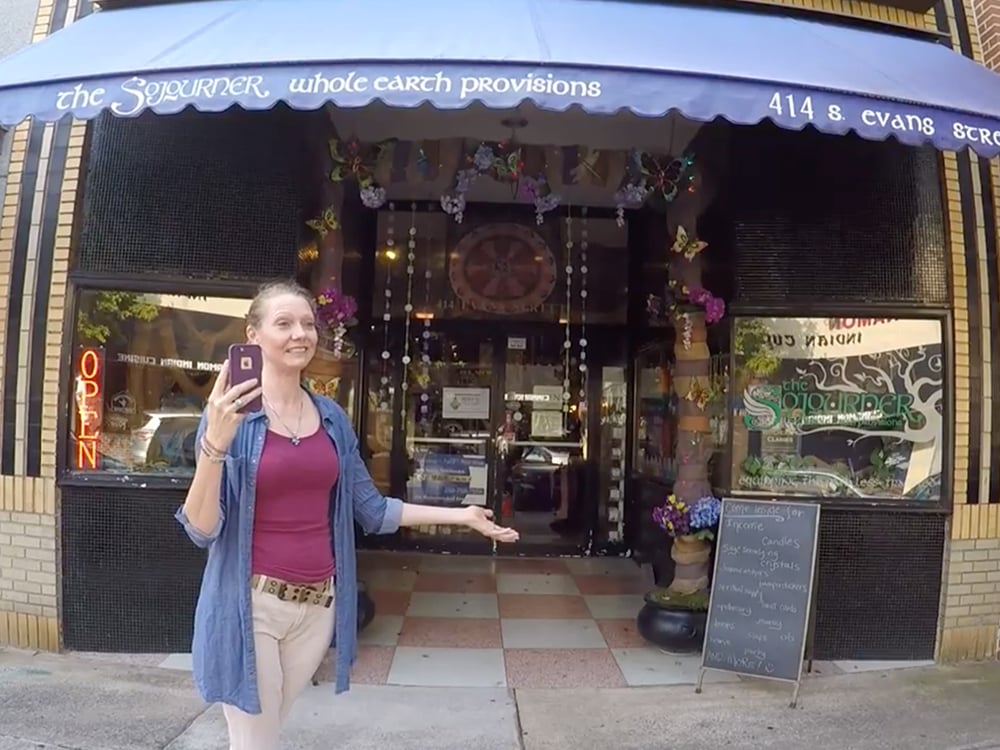 In 2017, Philip Brown, known as EC Street Preacher, who has also harassed another North Carolina metaphysical store, positioned himself outside The Sojourner. Brown travels mostly around the South sharing his form of the gospel with a bullhorn and large signs. He typically records his street sermons, and, in one video, Michelle can be heard engaging him in conversation.

“I think he was surprised that I knew Scripture better than him,” she said.

Vandalism, protests, harassment and regular proselytizing are not uncommon for metaphysical shops. In 2010, Rondell Gonzalez, the owner of Pye’Wackets, south of Anchorage, Alaska, found a 7-foot cross attached to her store’s sign. In 2015, someone tossed a gasoline bomb through the storefront window at Shooting for the Moon Spiritual Development Center, in Stroudsburg, Pennsylvania. (It failed to explode, and the attackers were never identified.)

In Minnesota in 2016, metaphysical shop owner Bonnie Gurney filed a cease-and-desist order to stop a local woman from posting protests on her store’s social media page, publicly burning store fliers, blocking the shop entrance and harassing patrons, telling them to “repent.” In 2019, a newly opened metaphysical shop in Staunton, Virginia, was shut down, reportedly after the property owner belatedly realized his renter was a metaphysical shop.

For the most part the owners answer casual protests with tolerance. Kathy Agate Brown, the owner of the Pennsylvania store attacked with a gasoline bomb, displays her motto: “We are all one.” When visitors confront her with religious messages, she said, she listens. “Everyone just wants to express their opinion,” Brown said.

Lucky Cabral, who runs Sanctum Folklorica in New Bedford, Massachusetts, said she has fired past employees for using anti-Christian and anti-religious rhetoric. “I don’t tolerate hate of any kind. All are welcome here.”

The attacks on metaphysical stores aren’t always motivated entirely by faith. In March of this year, a local woman showed up to “douse the storefront with holy water,” said Cabral. On Good Friday, the woman returned to burn a pile of sage (a traditional Native American spiritual purgative) near the front door. On Easter, she set fire to display shelves outside the store.

Cabral, a practicing witch, minister and life coach, said that in the three years since she opened, her store has been vandalized four times. This latest attacker, Cabral learned, was struggling with mental issues. A large collection of herbs and oils for sale at Herbs & Arts in Denver. Video screengrab

In 2015, in the Denver suburb of Englewood, vandals destroyed a sign at ISIS Books & Gifts, named for the Egyptian goddess, because they believed the shop was affiliated with the Middle Eastern terrorist organization. After the incident, the store was renamed Goddess Isis Books & Gifts.

Since then, owner Karen Charboneau-Harrison has only seen the “typical proselytizers.” They often leave “pamphlets in books that they find offensive,” she said. On occasion, the store has a visitor who attempts to “harass staff and customers.”

“We gently show them the door,” Harrison said. “In Denver, folks are pretty open minded … I would bet that smaller towns might have this problem happening.”

Location does seem to be a key to how metaphysical shops are received. In Antioch, California, the owners of The Mystic Dream report no problems, as do the folks who run The Awareness Shop in New Paltz, New York.

Cabral describes New Bedford as pagan-friendly. However, the town has a deeply rooted Catholic community, including a priest who reportedly sent store employees a letter calling Cabral evil and urging them to quit. Cabral said that she has seen attacks and harassment happen to other store owners, but “this was me,” she said. “It was shocking.”

While problems do persist for some stores, such attitudes seem to be a relic of a past America, however, when the religious landscape was more distinct and people did not mix their belief systems. During the 2008 boycott in Greenville, one woman stopped by The Sojourner, Michelle said, because she “heard in Bible study” that the store sold the best crystals.