(RNS) — How did Billy Graham become the most famous evangelist in America? Does he deserve blame for paving the way for the religious right? How should we see his place in America’s political and spiritual history?

The PBS series “American Experience” explores these questions in a fascinating two-hour documentary premiering Monday (May 17), offering an authoritative look at Graham’s life and ministry, from his beginnings as a dairy farmer’s son from Charlotte, North Carolina, to his death in February 2018 at age 99.

The historians and scholars in the film, including William Martin and Grant Wacker, the authors of two definitive Graham biographies, chronicle how Graham sought the ear of presidents, most notably Richard Nixon, and they agree that his cultivation of political power is a blot on his legacy (one that Graham, to his credit, confessed to in later years).

But director Sarah Colt, who devoted nearly two years to Graham, sifting through 300 hours of archival video and audio, looking at nearly 2,000 photographs and conducting 19 on-air interviews, could have spent more time with some of the 215 million people Graham preached to around the world. A film so rich in scholarship is diminished only by the missing voices of those whose lives Billy Graham made sweeter.

RELATED: Billy Graham, Franklin Graham and the dangers of mixing religion and politics

Colt introduces us to Billy at an age when he loved baseball and girls, but knew better than to miss his parents’ nightly Bible reading and prayer sessions. At age 16, for reasons Graham could not himself explain, he made his decision to accept Christ into his life at a revival held in Charlotte by traveling evangelist Mordecai Ham. Graham’s decision card, shown in one of the documentary’s grainy photos, is dated Nov. 1, 1934. 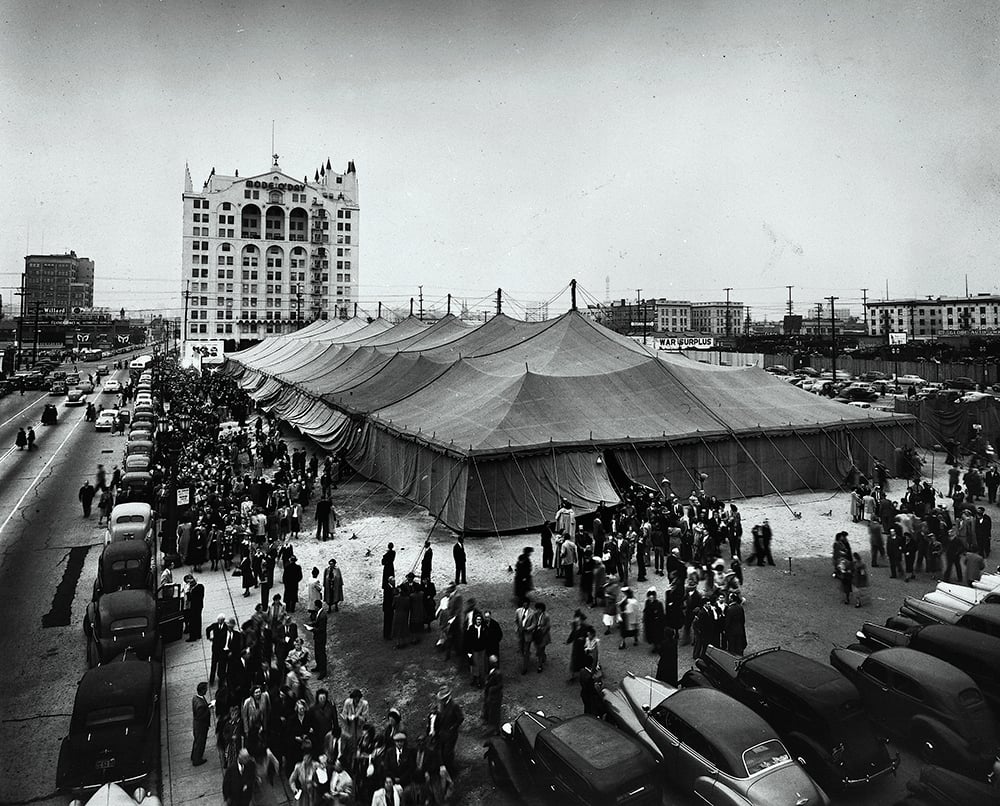 Already the Carolinas’ most successful Fuller Brush salesman, the teenage Graham unleashed his smooth-talking gifts “selling” Christ. In 1949, his tent revival drew the attention of newspaper mogul William Randolph, who figured he could sell papers by pushing Graham. In 1957, the evangelist’s New York crusade made him a star. He preached to 2 million people over 16 weeks. More than 56,000 made decisions for Christ.

The world had discovered what author Kenneth L. Woodward describes in the film as Graham’s animal magnetism. That long, lean frame. The trademark head of hair, distinctive even as it turned from golden to silver. A voice that Graham’s brother-in-law, evangelist Leighton Ford, likens to a train whistle on a prairie.

But the humility Graham projected hid a deep-seated ambition. Historian Randall Balmer claims in “Billy Graham” that its subject was drawn to politics as if it were a narcotic. In 1950, Graham nabbed an Oval Office audience with President Harry Truman. Truman didn’t care for Graham’s heavy-handed faith, but it was all the entree Graham needed. Mixing patriotism with Christian piety, he worked to align himself with politicians, and though he feigned impartiality he preferred conservative ones. The Rev. Billy Graham, right, in the Oval Office with President Richard Nixon in 1971. Photo courtesy of National Archives/Creative Commons

The relationship with Nixon served both president and preacher. After four students were shot dead by National Guardsmen in anti-war demonstrations at Kent State University in 1970, Graham invited Nixon to share the crusade stage with him in Tennessee. The appearance boosted the crowd by an estimated 50,000 people, most of them there to cheer Nixon.

But the association with Nixon ultimately besmirched Graham’s reputation. One of the film’s most powerful clips shows a clearly rattled Graham dodging reporters’ questions at a golf tournament in 1994, after recordings of Nixon’s meetings in the Oval Office were released. One 1972 tape had captured Graham agreeing with Nixon as he indulged in an antisemitic rant about Jews controlling the media.

The film also draws a clear line from Graham’s White House access to Jerry Falwell’s alliance with Ronald Reagan to Donald Trump’s evangelical advisory board. Though Graham understood he had gotten too close to politicians, and apologized for it, history should not let him off the hook. But history should also provide an explanation. Here’s mine: Graham, a small-town kid who never got over being starstruck in the presence of fame, saw pandering to power as a steppingstone to influence that would benefit his Christian message.

If Graham repented of his methods, he also came to reform his ministry, broadening his focus to say less about judgment and more about grace. “My job is to do the preaching,” Graham says in the film. “God’s job is to do the saving.”

The film ends without addressing the fate of the Billy Graham Evangelical Association after its founder’s death. Graham’s ministry is run today by his son, Franklin, who condemns gays and Muslims and praises Trump, seemingly having learned few of his father’s lessons.

Billy Graham brought evangelical Christianity out of the backwoods and into the mainstream, mastering radio, TV, movies and books to reach the masses while mounting good old-fashioned spectacle — a slickly produced rally in a packed stadium headlined by celebrities of the day. He did so while avoiding the sins that brought down later popular evangelists, from Jim Bakker to Jimmy Swaggart, sticking to his own Graham rule: Never be alone in a hotel room with a woman other than his wife, Ruth.

The “American Experience” film puts this story into the context of the postwar, anti-Communist and eventually post-atomic age, constantly offering assurance amid uncertainty. It’s the portrait of the right man arriving at the right time.

The source of that assurance should have been given more emphasis by the filmmakers. Everywhere he preached, until the day of his last crusade at New York’s Flushing Meadows Park in 2005, Graham gave hope to the lost, as a choir sang “Just As I Am” and thousands answered the call to come forward, Christians of all cultures, class and color.

ARCHIVE: Franklin Graham unfazed after evangelical base blasts him for encouraging vaccines

That’s the Graham I saw in covering him for decades as a reporter for The Charlotte Observer. The millions who filled stadiums for a half-century to hear Graham were searching for something more than they had in this life. 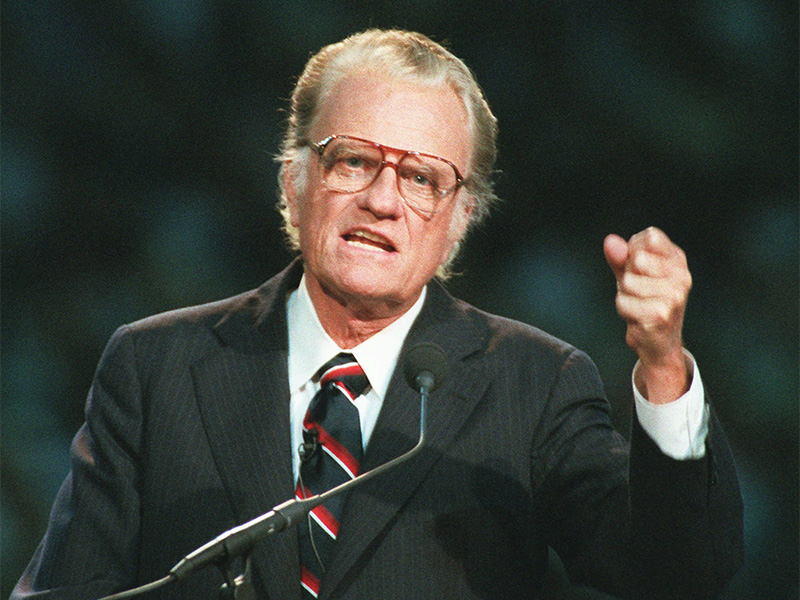 In 1996, as I wandered among the 79,000 people who had come for the last night of Graham’s crusade in Charlotte, I stopped to interview Bell, then 54. Inspired by Graham’s promise of life in a fresh light, she struggled to find the right words to describe what she was feeling. She wasn’t alone. Across the globe this last half-century, who knows how many others could barely express what Graham meant to them. Bell finally settled on this: “It’s like I could reach heaven.”

As you watch, remember Bell. The story isn’t complete without appreciating Graham’s place in the lives of everyday people.

(Ken Garfield covered Billy Graham for The Charlotte (N.C.) Observer. He is a freelance writer/editor in Charlotte. Reach him at [email protected].)