CHICAGO (RNS) — Wheaton College is rewording a plaque on its campus that referred to Indigenous people as “savage Indians.”

The plaque honors missionaries Jim Elliot, Ed McCully, Nate Saint, RogerYouderian and Pete Fleming who were killed in 1956 while attempting to share their Christian faith with the Waorani people in Ecuador.

It was donated to the school in 1957 by Wheaton’s class of 1949 in remembrance of their classmates, Elliot and McCully. Saint also graduated from the flagship evangelical school a year later.

“In the 64 years since the College received this gift, we have continued to grow in our understanding of how to show God’s love and respect to people from every culture,” Wheaton College President Philip Ryken said in a written statement.

“We have also learned much more about God’s ongoing work among the Waorani. We welcome this opportunity to ensure that we tell this unforgettable story in ways that reflect the full dignity of people made in the image of God.”

The missionaries’ story is well known by evangelical Christians, memorialized in the 2005 film “End of the Spear” and in several books by Elliot’s widow, the late author and speaker Elisabeth Elliot.

The five men had spent weeks exchanging gifts with the Waorani by airplane and had several friendly interactions with the people. But on Jan. 8, 1956, they were killed by a group of Waorani warriors.

The original plaque, which is in the lobby of Wheaton’s Edman Chapel, says of the Waorani, “For generations, all strangers were killed by these savage Indians.”

That language is now seen as offensive by the school’s students, faculty and staff, according to a previous statement by the college. 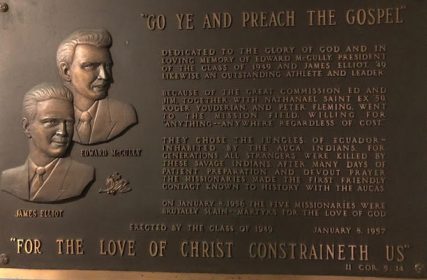 A plaque at Wheaton College was recently removed for its outdated language refering to native american populations. Image courtesy of Wheaton College

“Specifically, the word ‘savage’ is now recognized as being inherently pejorative and having been often used historically to dehumanize and mistreat native peoples around the world,” it said.

But the school, located in a suburb west of Chicago, still wanted to carry on the memory of the missionaries and to “uphold the reverential spirit” in which former students had donated the plaque.

This spring, Wheaton’s senior administrative cabinet appointed a task force to review the wording of the plaque and make specific recommendations for its rewording and replacement. The new wording was subject to a final decision by the cabinet, in consultation with the board of trustees.

The plaque will now read in part:

“God called them to the rainforest of Ecuador and the Waorani, a people who had never heard the gospel message. Known for their violence to encroaching outsiders and for internal cycles of vengeance killing, they were among the most feared indigenous peoples in South America at the time.”

It ends, “God’s redemptive story continues as the gospel is still shared among the Waorani to this day.”

Wheaton plans to dedicate the new plaque this fall in the lobby of Edman Chapel.

The seven-member task force was led by Wheaton College Alumni Association President Beverly Liefeld Hancock, the daughter of Fleming’s widow, Olive, from a subsequent marriage. Other members included undergraduate student Brooklin Williams, who has spent much of her life among the Waorani in Ecuador, where her family serves as missionaries, and David C. Iglesias, who is a member of the Kuna tribe of Panama and Colombia and is an associate professor of politics and law at Wheaton and the director of the Wheaton Center for Faith, Politics and Economics.

RELATED: Missions: Is it love or colonization? (COMMENTARY)

“We are deeply grateful to this remarkable team for their thoughtful work to continue the legacy of five missionaries who gave their lives to spread the gospel,” Ryken said.

“We have been further blessed by the strong support for this project from members of their families, from their class peers, and from Wheaton College alumni who have gone on to be missionaries after being inspired by these brave pioneers.”

News
‘The White Mosque’: A Mennonite of color’s travel memoir rejects rigid storytelling
Follow us on Facebook!
Submit your photos to RNS