(RNS) — As we walk in, we’re feted with celebratory bubbles by the greeters at the entrance. Just inside the doors, we’re offered free mimosas. Almost everyone milling about in the huge lobby is wearing shorts or jeans. (And almost no one is wearing a mask, to my dismay.)

Welcome to Crossroads Church in Cincinnati, my friendly neighborhood megachurch, which just celebrated its 25th anniversary this weekend. An invitation arrived recently in the mail and I thought, what the heck?

Maybe I felt I owed it to Crossroads to drop in on the birthday party since I’ve been using the church’s warehouse-like lobby for free as a drop-in workspace for more than a decade now. Or maybe, as someone who studies religion in America, I just wanted to understand the church’s appeal.

That appeal is palpable. Even in this incredibly challenging religious landscape, where we regularly see headlines about the decline of Christianity — last week, it was that the Southern Baptists have lost 2 million members — Crossroads grows larger and more confident. Since its humble beginnings in 1996 it has become one of the five largest megachurches in America.

My neighborhood Crossroads is the original version, the urtext, the base camp. Before it occupied its current building, it used to meet in our neighborhood’s middle school. Now the church has spawned satellite “campuses” all over the region.

It was an interesting service, and it also was not for me. There are good theological reasons I keep choosing to stay Mormon. I love the Book of Mormon; I believe in eternal families; I resonate with our theology’s emphasis on human agency and eternal potential. But I also see stagnation in the LDS church in America, and often feel alienated by its commitment to preserving a form of corporate culture that is hierarchical, male-dominated and outdated. Members often mistake that form for the gospel, and that conflation is hurting many of us.

Here are a few ideas I took away from Crossroads. 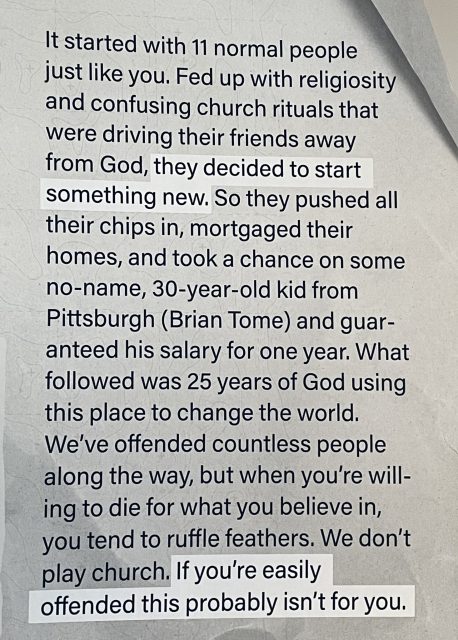 “If you’re easily offended this probably isn’t for you.” Gauntlet thrown.

Crossroads is committed to pushing the envelope, 24/7. Its critics would say it’s edgy just for the sake of grabbing attention. Instead of trying to counter that accusation, Crossroads leaders would probably respond, “yes, exactly, thanks!” They want to grab attention and repeatedly say they’ll do “anything short of sin” to get people to listen to the good news.

So they go out of their way to make sure you know they’re not your grandma’s church. They conduct extensive market research to learn what has turned you off from church in the past, and what might invite you in. Hence the mimosas.

Slick? Sure. But there’s a lot to be said for making a worship experience feel like a party. Mormons used to know how to do this, with our love feasts and our multiday temple dedications (with wine!). Now we have formulaic sacrament meetings, about which the best thing I can say is they’re 20 minutes shorter than they were a few years ago.

When there’s nothing adventurous about going to church on Sunday — when we can predict everything that will happen in worship — we’ve lost something as God’s people.

I can hear the objections already: “We don’t go to church to be entertained!”

Of course we don’t. But how much are we missing when our imagination about worship has only two settings: “reverent piety” or “irreverent entertainment”? There’s a world of possibilities in the middle, and worship becomes stale when we don’t dare to experiment with those possibilities. 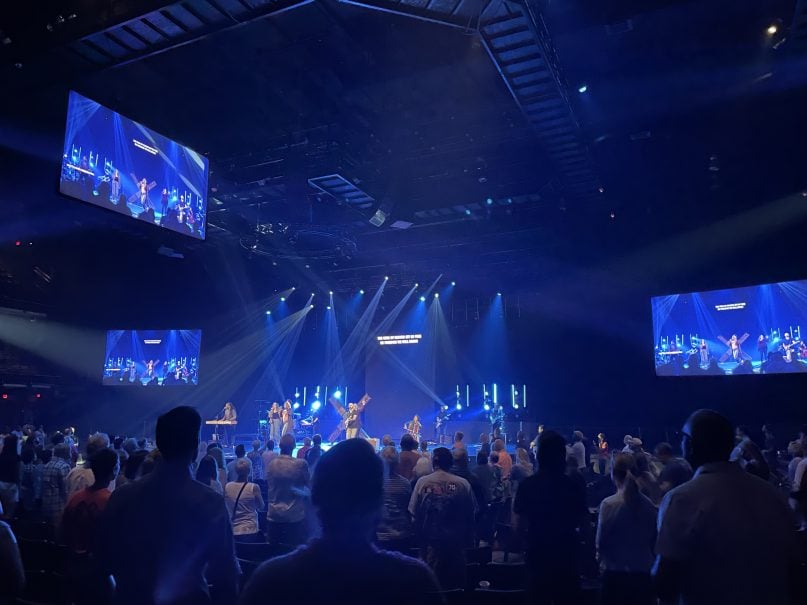 Worship at Crossroads Church in Cincinnati, May 23, 2021.

2. Let people be themselves at church.

This is related: Let people be who they are. Stop it already with the “five fingers” of an acceptable testimony for sacrament meeting. If people’s testimonies only have the same five rote components, that loss of God-given diversity should make us weep.

Many of us feel stifled by all the focus on dressing the “right” way for church (or life), or praying with King James thees and thous, or avoiding real discussions about what’s going on in people’s lives. Our constant emphasis on external perfection is crippling us.

Mormons are earnest Christ-followers, and I love that about us. But we also gloss over the parts where he was provocative, inappropriate, anti-establishment, scandalous. It’s revealing that in our church culture, adults rarely call him Jesus; he is more often Jesus Christ, or “the Savior.” We’re just not on a first-name basis, and we regard that distance as a form of respect.

One thing that’s clearly resonating at Crossroads is how it encourages people to bring their whole selves to church. Worshippers want to be the same people on Sunday morning that they are on Saturday night, people who can question God out loud, swear when it feels necessary and admit they don’t have all the answers. 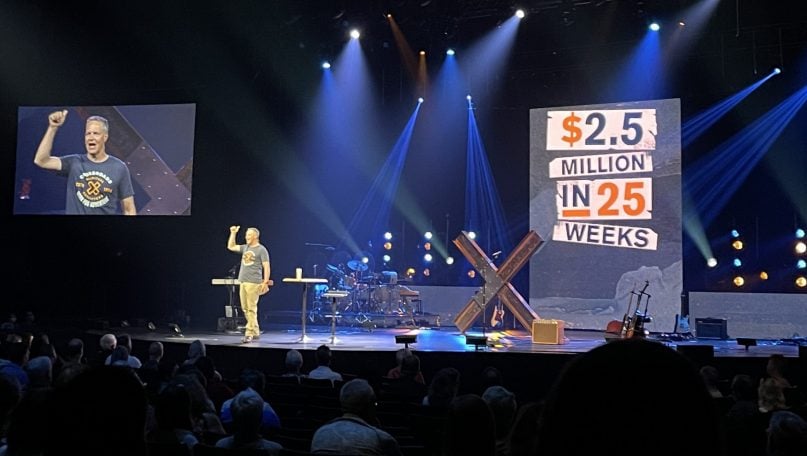 Crossroads pastor Brian Tome announces the church will give away $2.5 million to celebrate its 25th anniversary.

3. Stay out of the culture wars.

Let’s put something out there about Crossroads: It is not LGBT-affirming. But that issue isn’t regularly preached or emphasized from the pulpit. I’ve had friends who go to Crossroads who are disappointed in its LGBT stance (and one who is working to change it). But here’s the thing: They are still attending. They can still feel comfortable at the church because Crossroads has not made the heterosexual nuclear family the hill it plans to die on.

Instead, Crossroads has immersed itself in issues that many young adults care about, like ending poverty, providing access to education, volunteering in the community and promoting racial justice. This weekend, it celebrated its 25th anniversary not by merely patting itself on the back (though there was certainly some of that), but by giving away more money on top of its already notable generosity: $2.5 million to 10 charities over the course of the next 10 weeks. Last year, members raised more than $46 million to help Ohio families wipe out their medical debt. 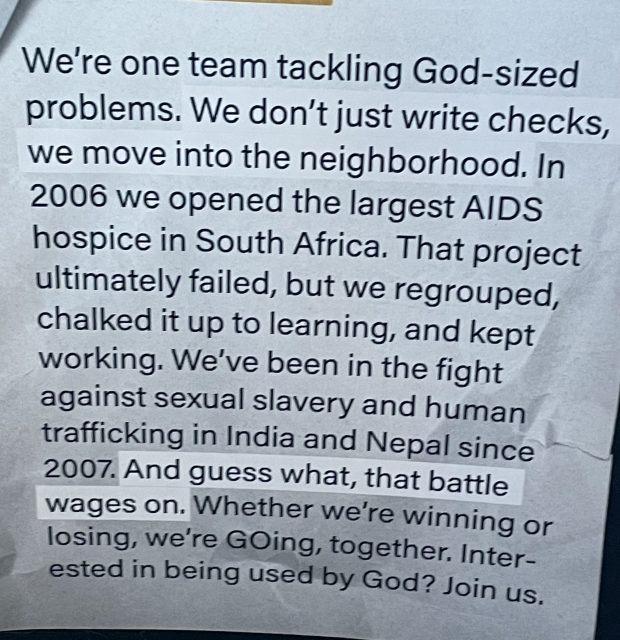 Crossroads admitting failure and learning from past mistakes.

4. Admit your mistakes out loud.

Apparently we got invited to the 25th anniversary weekend twice; Crossroads sent a follow-up postcard with corrected information. “The mail room guy got so excited about the 25th that he sent out tens of thousands of invites with the WRONG NAMES ON THEM. (Facepalm.)”

That was a small mistake, just an oopsie. NBD. But then in the sermon this weekend the senior pastor, Brian Tome, mentioned a major error the church had made in its growing pains through the years. He said it had sponsored an AIDS center in South Africa but had to change its focus because of some problem with the government there. This was briefly mentioned, kinda in the manner of “Who knew? Well, our hearts were in the right place and we learned from that mistake and moved forward with a different kind of ministry in South Africa!”

That approach got my attention. These are such simple, matter-of-fact admissions. But I can’t remember when my church has publicly admitted its failures, big or small. This inability to cop to failure, let alone laugh it off, is a classic sign of perfectionism. How much healthier is it for leaders to just openly acknowledge when they’ve made an error, and then we can all move on?

Finally, Crossroads has hit upon something we need more of in Mormon culture, which is outdoor adventure for adults. We offer this to youth, and we do it well. Away from their ordinary lives, the youth are primed to meet God in fresh ways. But we don’t have programs or camps for adults, unless they’re chaperoning kids. Why don’t we do this?

Crossroads offers camp experiences and retreats for women, for men and for couples, as well as for youth. From what I hear from people I know in the community, these can be life-changing experiences. If our church could offer something like this for grown-ups (without trying to micromanage their time or behavior like overzealous mission presidents), it could be a site of transformation and spiritual rejuvenation.

I’ve heard it said that in terms of programs, Mormonism has more to offer people in the first quarter of their lives than just about any other religion. After that, our approach to adult formation is basically that adults no longer need formation. Adults’ job is to stay busy raising their kids and “endure to the end.”

This is a missed opportunity. Adult Mormons I know are hungry to meet God in fresh ways, often out-of-doors. I’d love to see us offer different kinds of weekend camps for adults, moving away from the model of the “pioneer endurance test” of, say, a trek reenactment and toward that of choose-your-own adventure.

Crossroads is not perfect — far from it. And it’s not going to be the fastest-growing church in America forever (any Mormon can tell you that; hey, that used to be us). What was refreshing to see this weekend was that Crossroads doesn’t seem to have fallen into the trap of mistaking its core identity with being perceived as the best or the biggest. It’s just the church where people are willing to try “anything short of sin” to get you a little bit closer to God.

Retreats offer a safe space to be both Mormon and real