(RNS) — A new study from Lifeway Research suggests more Protestant churches closed in 2019 than opened — continuing a decades-long congregational slide that is only expected to accelerate.

“Even before the pandemic, the pace of opening new congregations was not even providing enough replacements for those that closed their doors,” said Scott McConnell, executive director of Lifeway Research.

Scholars cautioned that accurate information on church closings is very hard to come by and also that the numbers of closings are still relatively small. There are between 320,000 and 350,000 Protestant churches in the U.S., so the closure of 4,500 churches represents a loss of 1.4%, said Scott Thumma, a professor of sociology and director of the Hartford Institute for Religion Research.

But another study, from the Center for Analytics, Research and Data, affiliated with the United Church of Christ, painted an even starker picture. 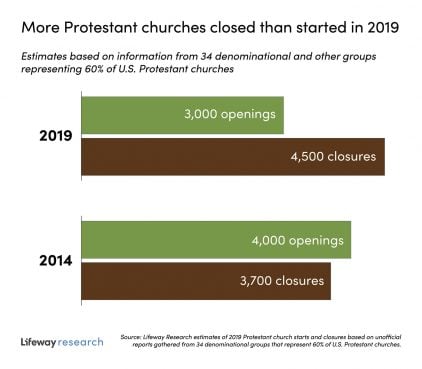 That study, published in April, estimated that in the decade ending in 2020, 3,850 to 7,700 houses of worship closed per year in the United States, or 75 to 150 congregations per week. It also projected those numbers will double or triple in the wake of the pandemic.

The biggest reason for church closings is a decline in church membership. A March poll from Gallup found that fewer than half (47%) of Americans say they belong to a church, synagogue or mosque, down from more than 70% in 2000.

Add to that the increasing cost of maintaining aging buildings and paying for capital improvements and a post-pandemic reluctance to return to in-person services. Some congregations will continue to thrive, especially those that convert their sacred space to mixed use or sell part of their land for housing.

“Church planting is slowing, and the number of closures is growing,” said Ed Stetzer, executive director of the Wheaton College Billy Graham Center. “Yet, the opportunity is still before us.”