(RNS) — The Indian American community has been recently roiled by three lawsuits, which have shed light on deep divisions within the Hindu diaspora. One involves debates over the links between Hindus in the United States and Hindutva, or Hindu nationalism, in India. Two other lawsuits involve caste discrimination and caste exploitation in U.S. workplaces. These issues, combined with the authoritarian and exclusionary politics of the ruling Bharatiya Janata Party in India, have forced me to confront my own identity as a Hindu.

My family in India belongs to a Scheduled Caste. Scheduled Castes or Dalits, along with Scheduled Tribes or advisasis, are recognized under Indian law as communities that, due to their ascribed low status in the Hindu caste hierarchy, have long suffered oppression, marginalization and exclusion. After the independence of India in 1947, the Indian government extended a host of affirmative action policies in education, employment and housing to these groups. My family benefited from these policies and I had the privilege of growing up in a comfortable, middle-class home in urban India.

I should say that my life story is not typical — Dalits continue to experience widespread discrimination. My own lived experience with caste oppression is, however, limited. Yet, I remember the all-too-frequent snide remarks from my upper-caste friends and neighbors — about how quotas in education and employment reward “meritless” SCs and STs; how government offices are inefficient because of “lazy quota people”; how airlines should not hire Dalit women as flight attendants because they “don’t know how to look pretty.”

And I remember how important it was to my family that we hide our caste. Caste divisions in India are deeply intertwined with family customs and rituals. While my friends would comfortably talk about how their caste intersects with their food habits, music choices and even their personalities, we were told to never bring up our caste in “mixed” company. “If you tell your friends who we are,” our elders would say, “they won’t look at you the same way.”

As an adult, I shied away from calling myself a Hindu, acutely conscious of the patriarchy and exclusion embedded in many Hindu rituals. The brutal authoritarianism of the BJP government, carried out in the name of Hindus, made me recoil even further.

The BJP’s own position toward caste is interesting. The BJP is a part of a group of organizations, led by the Rashtriya Swayamsevak Sangh, that are committed to reshaping India into a Hindu majoritarian state. Seeking to create a binary Hindu/non-Hindu society, the RSS has argued that socioeconomic distinctions among Hindus should be erased and it has claimed to welcome youths from various castes, including Dalits. The BJP itself has assiduously courted — and gained — Dalit voters. In the recent hotly contested elections in the state of West Bengal, the party actively reached out to members of my caste community. (The BJP eventually lost that election to the incumbent party, the secular Trinamool Congress). 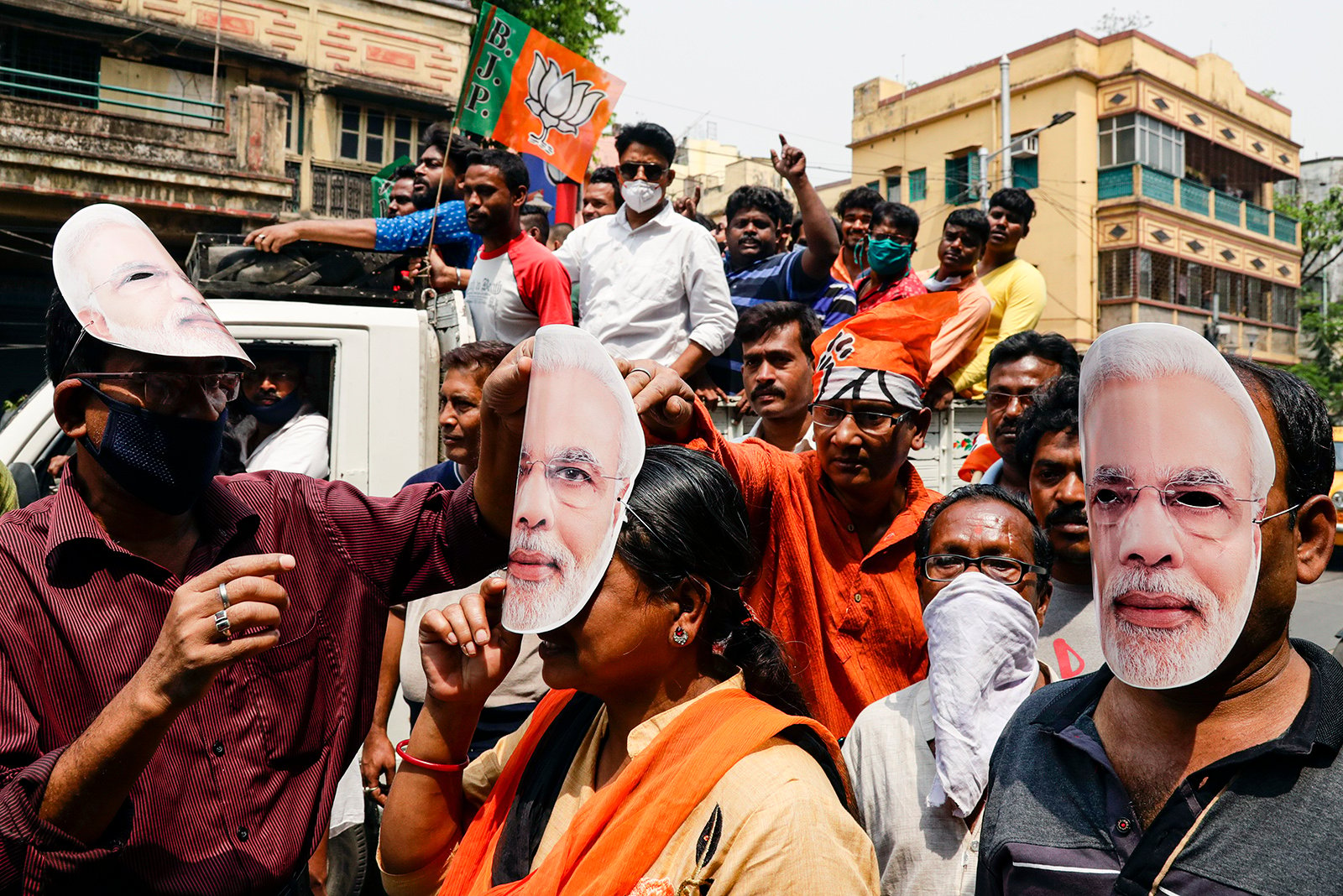 In this March 20, 2021, file photo, supporters of Bharatiya Janata Party wear masks bearing the likeness of Prime Minister Narendra Modi during a campaign rally ahead of elections in West Bengal state in Kolkata, India. Despite clear signs that India was being swamped by another surge of coronavirus infections, Modi refused to cancel the rallies, a major Hindu festival and cricket matches with spectators. The burgeoning crisis has badly dented Modi’s carefully cultivated image as an able technocrat. (AP Photo/Bikas Das, File)

However, despite Hindutva’s ostensible support for a united Hindu nation, the actions of the BJP and its allied organizations are abashedly doctrinaire, divisive, intolerant of dissent, and violent. For example, the political ascendance of Hindutva has been accompanied by the rise of Hindutva vigilantes who have attacked and lynched Dalits. Moreover, the ferocity with which the ruling party has persecuted Dalit activists and scholars leaves no doubt about its repressive agenda.

These developments had made me reluctant to see myself as a Hindu. Yet, more and more, I realize I am, by practice, a Hindu. I celebrate Diwali and other Hindu festivals. I have representations of the Hindu deities, Ganesh and Durga, in my home and my workplace, and I look to them for strength and succor. My marriage ceremony was Hindu. I tell my child stories from Hindu epics.

I am also acutely aware of the fact that Prime Minister Narendra Modi uses his support among Hindu Americans of Indian origin as a source of legitimacy, something he and his party regularly tout to build up their stature. Whether Hindus like it or not, whether we want it or not, our words and our actions are helping to shape the Indian and global trajectory of Hindutva.

Like every religion, Hinduism is riddled with contradictions and complexities. There is much in its past, rife with oppressive practices, that I cannot bring myself to celebrate. Yet, it also has a long and well-documented history of debate and synthesis, which I cherish.

Is it possible to be a Hindu and reject caste? For me, the answer is yes. Hinduism is a living religion, and Hindus can reform their religion by the very act of living out the changes we seek.

Can Hindus celebrate their faith and reject Hindutva? Absolutely. In fact, as the Indian republic faces an existential threat, from leaders who falsely claim to act in the name of Hindu pride, I believe Hindus have a duty to do so. Hindus who believe in pluralism and democracy should coalesce to present an inclusive, necessary and alternate voice to the drumbeat of Hindutva.

B.R. Ambedkar, the architect of the Indian Constitution, was born into a low-caste family. One of the sharpest intellectual minds of the 20th century, he was a trenchant critic of Hinduism and worked tirelessly to challenge the rigidity of the caste system. Even as he himself left the Hindu fold of his birth and converted to Buddhism, he promised active sympathy to those Hindus who were willing to question and change the religion’s dogmas.

While remaining clear-eyed about the roadblocks facing the country, Ambedkar articulated a remarkable vision for India — that it could, through sustained commitment, conscious action and constant vigilance, become a political and social democracy that provides liberty, equality and fraternity to all its people.

In calling myself a Hindu, by rejecting caste while recognizing my family’s experience with it, and by condemning Hindutva, I am lending support to that bold vision.

(Bidisha Biswas is a professor of political science at Western Washington University and a senior fellow for the Centre for Global Cooperation Research in Duisburg, Germany. A version of this article originally appeared on American Kahani. The views expressed in this commentary do not necessarily represent those of Religion News Service.)

Religion Hub
Muslim nations slam India over insulting remarks about Islam
Follow us on Facebook!
Submit your photos to RNS