(RNS) — The Southern Baptist Convention is gathering in Nashville, Tennessee. It’s not an exaggeration to say that it may be the most consequential denominational meeting for any Protestant denomination in the last 30 years.

But who are Southern Baptists, and why is their vote on a new president and a series of resolutions reverberating so loudly across the entire American religious landscape? To begin with, it’s crucial to point out just how large the Southern Baptist Convention is compared with other prominent Protestant traditions in the United States.

The Southern Baptist Convention boasts 14.1 million members, according to the most recent estimates provided by its data agency, Lifeway Research Services. The seven next largest Protestant traditions together total slightly more than 15 million Americans, with the next largest, the United Methodist Church, reporting a membership of 6.5 million — less than half the size of the Southern Baptists.

RELATED: Southern Baptists head for annual meeting at a crossroads on race and gender

Thus, the SBC stands alone as not only representative of what is happening in American evangelical Christianity but also in Protestant Christianity as a whole. 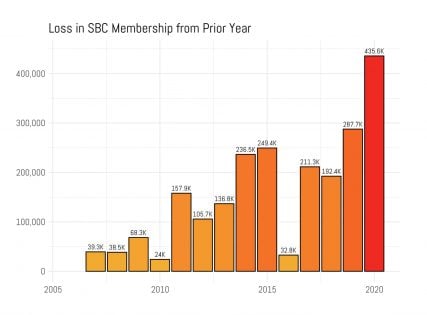 SBC membership numbers dropped by more than 400,000 from 2019 to 2020, the largest loss within a single year thus far. Data collected by Lifeway Christian Resources

However, the SBC has been going through a bit of a membership crisis. As recently as 2006, the denomination had about 16.3 million on the rolls but it has hemorrhaged members at an increasing rate in recent years. Data from the Cooperative Election Study

Who are Southern Baptists?

The demographics of the Southern Baptist Convention shed some light on why the denomination has been unable to keep young people or recruit new members. In 2008, about 80% of Southern Baptists reported their race as white and non-Hispanic. All other racial groups made up the rest, with 13% indicating that they were African American.

Thirteen years later, the SBC has made little progress in racial diversity. Some 77% of the convention is white, and about 16% are African Americans. (Pew Research Center puts the share of Black SBC-ers at about 8%.) The remaining 7% come from all other racial groups. It’s fair to say that white Southern Baptists dominate the denomination as much today as they did a decade ago, despite the fact that the religious composition of the United States is rapidly shifting.

That racial profile has something to do with the generational breakdown of the convention. In 2008, about 20% of all white Americans were from the so-called silent generation — those preceding the baby boom — while 37% were baby boomers. In 2020, those numbers had shifted to 9% and 36% respectively.

But among the Southern Baptists, those two generations have maintained the largest share of the membership. In 2008, the silent generation and baby boomers were nearly 65% of the SBC. By 2020 that had only declined to 57%. While millennials and Gen Z make up 39% of all white Americans, they are only a quarter of Southern Baptists.

In other words, younger, more racially diverse Americans have not latched on to the Southern Baptist Convention, leading to the possibility of an even larger drop in membership in the next several decades.

Data from the Cooperative Election Study

At the same time, the denomination has not managed to break away from its roots in the Southern part of the United States. Its base of support stretches from Mississippi and Alabama into North Texas, Missouri, Kentucky and Tennessee. Last year, J.D. Greear, the outgoing SBC president, tried to rebrand the convention by calling members “Great Commission Baptists” but that name hasn’t seemed to stick because of the deep ties that many members feel to the American South.

What is driving the divide?

Why is the 2020 annual meeting so incredibly pivotal for the future of the Southern Baptist Convention? 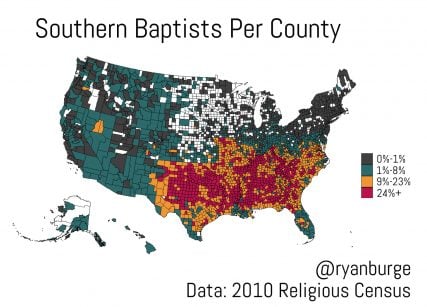 Data from the 2010 Religious Census

There have been a number of ideological fractures that have begun to form among members of the SBC. Sexual abuse by Southern Baptist pastors has been inadequately investigated, according to many members of the denomination. This has led some Southern Baptists to further question how the denomination has treated women over the course of its history.

At the same time, many conservative voices in the SBC have loudly and consistently decried the teaching of critical race theory in its affiliated seminaries. This has led many African American pastors to threaten to leave the convention over what they perceive as an unwillingness to seriously consider the possibility that African Americans have faced and continue to confront systemic racism in many institutions in the United States.

But all this is predicated on a simple and unmistakable reality facing the Southern Baptist Convention: It has pulled significantly to the right side of the political spectrum. In 2008, about half of white Southern Baptists identified with the Republican Party. That was not statistically different from the share of United Methodists who aligned with the GOP. But by 2020, the share of white Southern Baptists who said that they were Republicans jumped to 71% — an increase of more than 20 percentage points in just 12 years. 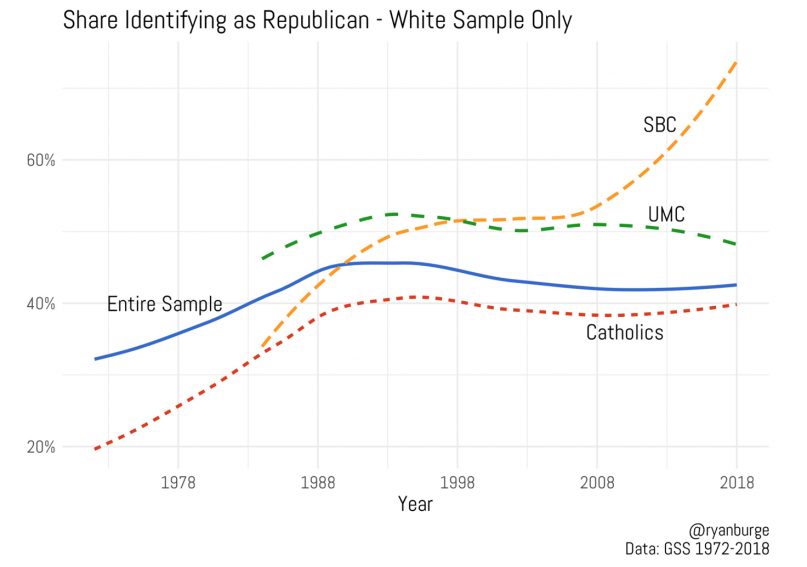 Data from the General Social Survey

RELATED: The bubbas-that-be in the SBC

It’s not a stretch to liken this move by the Conservative Baptist Network to news sites such as NewsMax and One America News, which began to see a dramatic rise in audience after Fox News recognized Joe Biden as the legitimate winner of the 2020 presidential election.

What is facing the Southern Baptist Convention, in other words, is similar to the fractures inside the ranks of the Republican Party. While it’s clear that the Trump wing has taken control of the GOP, it’s still an open question whether the Conservative Baptist Network can wrest control of the Southern Baptist Convention and turn it to the right over the next several decades.

Donate Now!
Posted in
Ahead of the TrendChristianityEvangelicalFaithMainlineOpinionProtestant