(RNS) — Southern Baptist seminary presidents have taken up a hot culture war issue in a recent statement, saying “critical race theory” is incompatible with the denomination’s central statement of faith.

Issued on the 20th anniversary of the adoption of the Southern Baptist Convention’s most recent statement of faith, the Baptist Faith & Message, the presidents’ statement takes aim at the race-based theory that has become a bugaboo to many conservatives within the Christian right.

“We stand together on historic Southern Baptist condemnations of racism in any form and we also declare that affirmation of Critical Race Theory, Intersectionality, and any version of Critical Theory is incompatible with the Baptist Faith & Message,” the statement reads.

It does not offer a description of critical race theory or explain how it clashes with the core beliefs of Southern Baptists, the nation’s largest Protestant body with 14.5 million members.

But Daniel Akin, president of Southeastern Baptist Theological Seminary in Wake Forest, North Carolina, said the theory was rooted in Marxism, and therefore the presidents wanted to make it clear they could not endorse it “in any form or fashion.”

Since Marxist theories are atheistic, Akin said, Southern Baptists must reject its underlying framework for understanding the world.

Critical race theory, a framework used in many academic circles, tries to explain how racial inequality cannot be understood apart from social, economic and legal systems that benefit white interests. 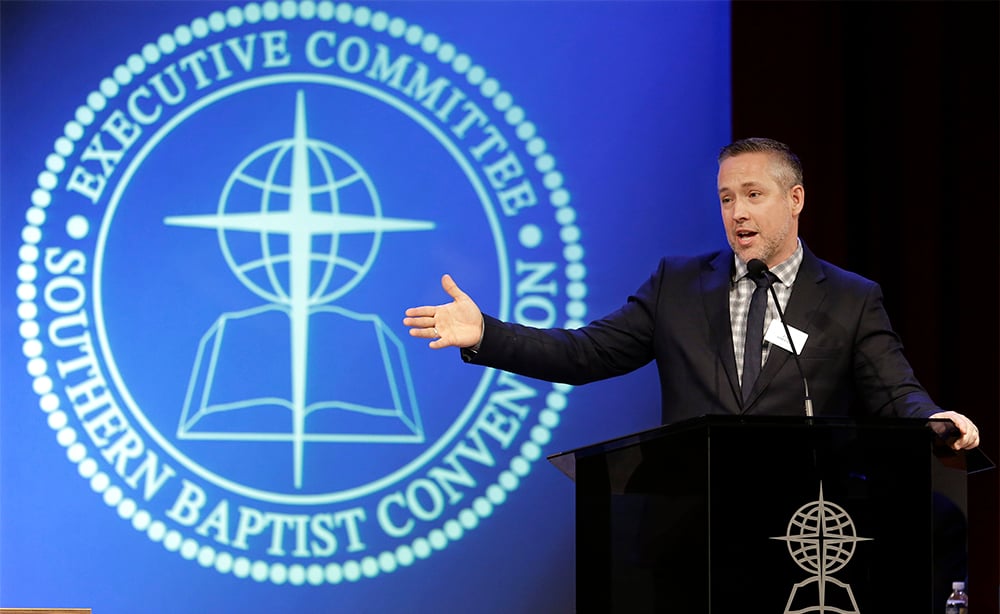 In an article in Baptist Press, Southern Baptist Convention President J.D. Greear said he, too, approved of the presidents’ position.

“We want to be crystal clear that we oppose all forms of racism, personal and systemic,” Akin told RNS.

But the seminary presidents may not have been following Trump so much as reacting to factions within Southern Baptist circles that have complained the denomination is drifting to the left and abandoning core convictions.

One such group that has taken issue with critical race theory is the Conservative Baptist Network, a coalition of pastors that contends the denomination has been hijacked by political correctness and secular thinking.

For Southern Baptists, any statement on race is a delicate matter. That’s because the Southern Baptist Convention was born in the crucible of slavery, founded in 1845 out of a conviction that missionaries could own slaves.

Beginning in 1995,  the denomination passed a number of resolutions apologizing for slavery, saying, “we genuinely repent of racism of which we have been guilty.” “The SBC is a denomination haunted by white supremacy and, ironically, the only system it doesn’t want its people engaging with at all is a social science theory that specifically addresses its heritage, which is systemic racism,” said Kyle J. Howard, a racial and spiritual trauma counselor. “It’s deeply revealing. No matter how many times they say they are against racism, they continually move in ways that suggest it’s true in word, not in deed.”

The seminary presidents’ statement comes at a time when Southern Baptists are trying to attract more African Americans and start more Black churches. This summer, one of them, led by Black pastor John Onwuchekwa of Atlanta, left the denomination.

“The convention was one bad marketing meeting away from being the ‘Confederate Baptist Convention,’” Onwuchekwa told The Washington Post.

Jemar Tisby, author of “The Color of Compromise: The Truth About the American Church’s Complicity in Racism,” said such statements make it unlikely that the SBC’s attempts to attract more Black churchgoers will succeed.

“The fallout is happening already, but it will become much more apparent in the years to come,” Tisby said.

Tisby said he didn’t think the seminary presidents were racist.

“These men in their intentions are not racist,” he said. “But the impact of the statement is to put all the energy and focus behind critiquing efforts at racial justice, when the energy should be put toward rooting out the racism in their midst.”

The statement was agreed on at a meeting of the Council of Seminary Presidents of the Southern Baptist Convention before Thanksgiving, but it was published by the denominational news arm, Baptist Press, on Monday (Nov. 30).