JERUSALEM (RNS) — For most of the past 12 years, Benjamin Netanyahu’s governing coalitions depended on the highly leveraged participation of small Haredi, or ultra-Orthodox, political parties, who helped keep Israel’s longest-serving prime minister in power as long as he resisted reforms that would promote religious pluralism and provide legitimacy to non-Orthodox Jews.

Now that Israel’s new government, led by Prime Minister Naftali Bennett, includes a Reform rabbi but no Haredi parties, religion-and-state experts in the country are watching to see if groundbreaking legislation that many Israelis and Diaspora Jews have been yearning for is on its way.

For the fragile coalition to survive — the new government commands only 61 seats in the 120-seat Knesset — pundits say lawmakers will need to sidestep controversial issues such as settlement building and exemptions from military service for yeshiva students.

Comprising eight parties, Bennett’s coalition has widely divergent agendas. Some parties want to rein in the influence of Orthodox Jews, including a commitment to weaken the rabbinate, allow public transportation on Shabbat and introduce civil marriage for all, including LGBTQ couples. Since the establishment of Israel in 1948, Jewish marriage has been strictly regulated by the Orthodox Chief Rabbinate.

Meanwhile, the Islamic party that has found a home in the government opposes civil marriage and the expansion of LGBTQ rights, views that some of the other, non-Muslim lawmakers in the coalition share.

Haredi lawmakers, now in the opposition, have already called the government anti-religious and “Reform,” which in Israel comes across as a nasty swipe at Reform Jews.

“In what way are you Jews?” shouted United Torah Judaism leader Moshe Gafni in the Knesset, Israel’s parliament, after the new government was sworn in Sunday (June 13). “Not Shabbat, not conversion … nothing. How is this state Jewish? How is it different from France?”

Bennett, a proud modern Orthodox Jew, responded by reciting the Shehecheyanu prayer to celebrate the launch of the new government: “Blessed are You, God, Sovereign of all, who has kept us alive, sustained us and brought us to this season.”

Given these dynamics, the government “will focus on issues that don’t push the envelope too hard,” predicted Adam Ferziger, a professor of Jewish history and contemporary Jewry at Bar-Ilan University.

Ferziger believes the government will steer clear of major religious reforms, such as recognizing the authority of non-Orthodox rabbis, and instead chip away at the Chief Rabbinate’s monopoly by offering modern Orthodox alternatives.

“For liberal, moderate Orthodoxy, this is the time to create a less aggressive ‘us versus them’ environment,” Ferziger said, alluding to the coalition’s plan to allow municipal rabbis, presumably more liberal than most rabbinate rabbis, to supervise kosher food preparation, for example.

While the coalition understands the need for religious reforms, Ferziger said, Bennett and other Orthodox members of the coalition don’t want to alienate their own religious constituents — or Haredi lawmakers, keeping the next election in mind.

Uri Regev, a Reform rabbi and CEO of the nongovernmental organization Hiddush-Freedom of Religion for Israel, expects that the new government will continue to disenfranchise non-Orthodox Jews by withholding recognition and funding, but he is heartened by the coalition’s stated intention to mend fences with Diaspora Jewry, particularly those in North America, who belong largely to Judaism’s liberal streams. 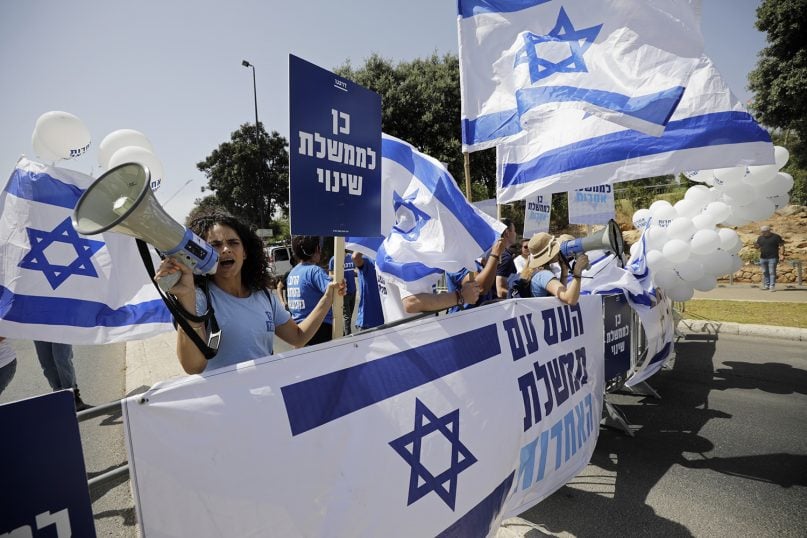 Israeli protesters hold flags and chant slogans during a demonstration in support of the new government, outside the Knesset, Israel’s parliament, in Jerusalem on June 13, 2021. (AP Photo/Sebastian Scheiner)

“This commitment to strengthen Jewish unity between Israel and world Jewry is of great importance,” Regev said, noting that Nachman Shai, the new minister of Diaspora affairs, is a respected moderate. “This is a tremendous departure” from previous governments, Regev said.

In a statement, the U.S.-based Union for Reform Judaism called on the Israeli government to “renew ties” with the Reform movement and commit to furthering a “pluralistic agenda, combat(ing) extremism and incitement,” including attacks at the sacred Western Wall in Jerusalem against non-Orthodox groups and the Women of the Wall prayer group.

Regev said the new government’s promise to guarantee equality between men and women — although not an explicitly religious issue — could prevent the gender segregation and discrimination imposed and sanctioned by some religious leaders.

Regardless of what the government achieves, “Hiddush will continue to pursue religious freedom in the courts,” he said. 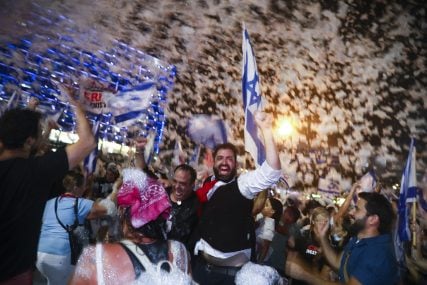 Education may also get a boost under the new government. Daniel Statman, a senior fellow at the Israel Democracy Institute and chairman of the philosophy department at the University of Haifa, said the coalition government has a “real opportunity” to improve secular education in the Haredi school system.

To encourage Torah study over secular subjects after graduation, most Haredi schools for boys do not teach math, English or science. As a result they are unprepared to attend university, Statman noted, and their ability to seek employment is inhibited. If they go straight to a yeshiva, meanwhile, they are exempted from military service.

“This is the time to advance the core curriculum in Haredi schools, to encourage Haredim to have a professional education and start working,” Statman said. A little more than half of Haredi men work, a far lower percentage than men in other groups.

But Statman doesn’t believe that this government — or any government — will be able to force Haredi yeshiva students to serve in the Israeli Defense Forces. Military service is mandatory for Jewish Israelis who aren’t Haredi (although religious women can opt for national service).

“Passing a draft law would be collective self-delusion,” said Statman, who believes the government should instead encourage young Haredi men to work or pursue higher education to break the community’s cycle of poverty.

Statman hopes the government will permit public transportation on Shabbat, something only offered in a few Jewish-majority municipalities. Israelis without cars who want to visit relatives or go to the beach on the Jewish Sabbath must usually take a taxi.

“From the perspective of Jewish law, why are private cars allowed on the road but not public buses? Isn’t it better to have one bus driver breaking Shabbat instead of 20 taxi drivers?

“It will be interesting to see how this develops,” Statman said.