NASHVILLE, Tenn. (RNS) — The newly elected president of the Southern Baptist Convention got his first marching orders on Wednesday (June 16).

The denomination’s Nashville-based Executive Committee has hired Guidepost Solutions to review its handling of abuse allegations. The new task force will either take over that review or set up a separate third-party review.

North Carolina pastor Ronnie Parrott and Tennessee pastor Grant Gaines had proposed setting up the task force during the SBC’s annual meeting. Their proposal was initially referred to the Executive Committee during a meeting Tuesday.

But Gaines appealed to messengers — delegates from local churches — and they overruled that decision by a more than two-thirds majority.

Concern over sexual abuse had dominated conversation leading up to the SBC’s annual meeting, which drew more than 21,000 people to Nashville’s Music City Center, including 15,726 messengers.

In early June, leaked letters from former SBC ethicist Russell Moore became public. Those letters included allegations that abuse victims had been mistreated by leaders of the Executive Committee. A leaked “whistleblower report” included an audio clip of Executive Committee president Ronnie Floyd, saying he was not concerned about what abuse survivors say about the SBC’s response to abuse.

“I am not worried about that,” he said. “I’m thinking about the base. I just want to preserve the base.”

A recent report from Rehoboth Baptist Church in Georgia also alleged SBC leaders had failed to look into allegations of abuse against a former staffer at the church who had moved on to allegedly abuse children at other churches. Executive Committee staffers have also been criticized for mishandling the case of abuse survivor Jennifer Lyell. A leaked email from a former Executive Committee staffer referred to abuse advocates as being misled by the devil.

The task force approved by messengers had a wide mandate. 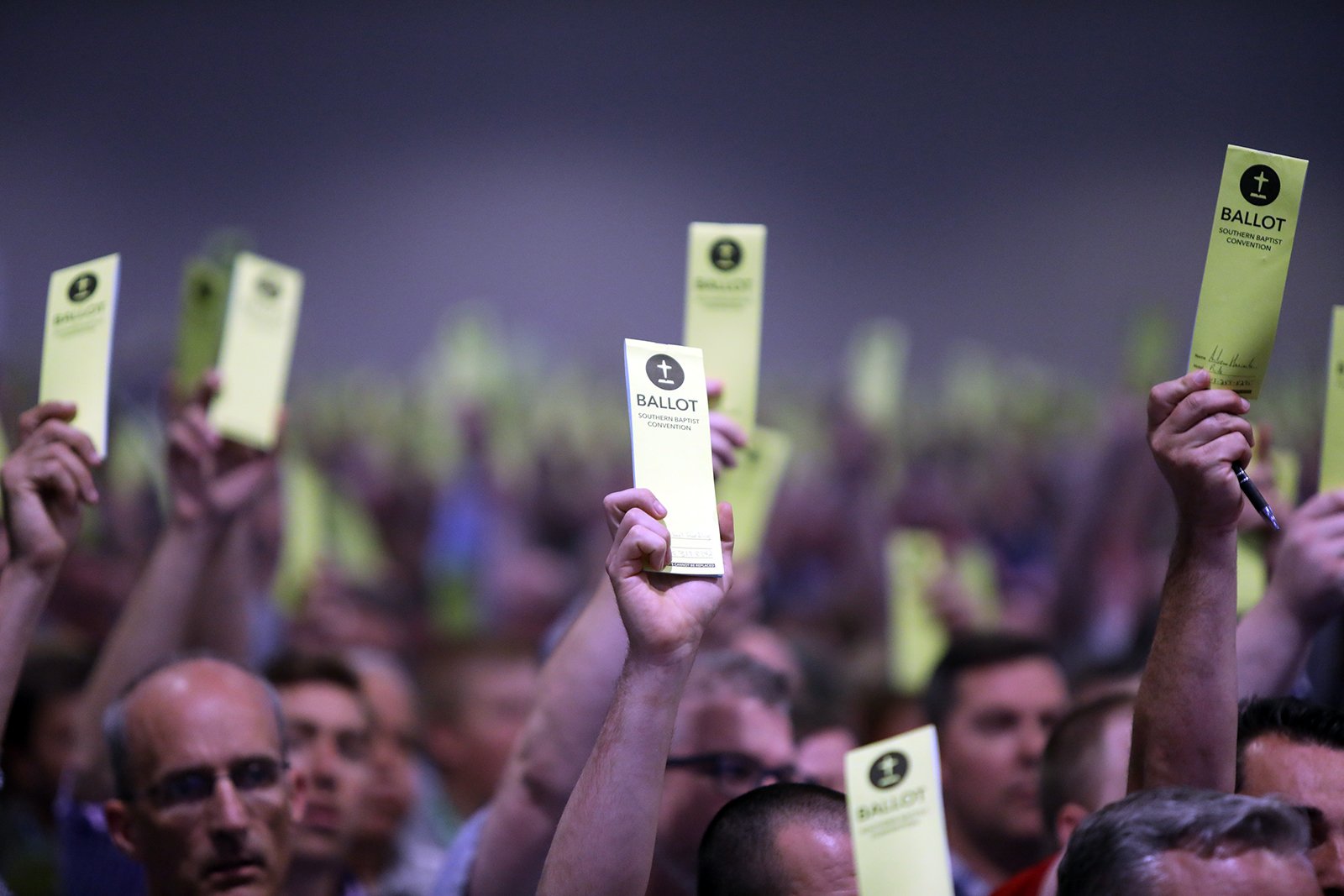 Messengers vote during the annual meeting of the Southern Baptist Convention on June 15, 2021, at the Music City Center in Nashville, Tennessee. RNS photo by Kit Doyle

“Said task force shall ensure that the third-party review includes an investigation into any allegations of abuse, mishandling of abuse, mistreatment of victims, a pattern of intimidation of victims or advocates, and resistance to sexual abuse reform initiatives,” the motion for the task force read.

Discussion of the proposal was passionate.

Gaines argued that since the Executive Committee was being investigated, the committee could not be in charge of the investigation.

Troy Bush, the pastor of Rehoboth Baptist in Georgia, agreed.

“We believe that the Executive Committee does not have the ability to handle this task force investigation,” he said.

Sarah Gregory, a messenger from First Southern Baptist Church in Mountain Home, Idaho, disagreed with the motion, saying it was unbiblical.

“The Holy Spirit does not need the Southern Baptist Convention to be judge and jury in these matters,” she said. “The local body of believers is responsible and accountable to God, in these matters, and no one else.”

A West Virginia messenger said Southern Baptists deserve to know the truth about abuse. The messenger read from a Bible story about the people of Israel being defeated because they had sin in their midst.

“God’s people did not have victory because they had not dealt with their sin,” the messenger said.

“I want all of you to know I hear you,” he said. “The Executive Committee respects the messengers. We need this deliberative process. We know that this will make our convention stronger.”

The request for the task force comes on the day after Southern Baptists adopted a resolution that stated the messengers believe “any person who has committed sexual abuse is permanently disqualified from holding the office of pastor.” They also recommended affiliated Southern Baptist churches apply this standard to all church leaders.

Nathan Finn, the vice chair of the resolutions committee, said the resolution served as a way to supplement the procedural votes to address abuse that have occurred during the meeting.

“We felt like this is a way that we can come alongside all the positive momentum that says our first instinct needs to be to care for those who have been abused more than protecting our own reputation,” he said during a Wednesday news conference with resolution committee members.