(The Conversation) — The United States Conference of Catholic Bishops recently approved drafting a document on receiving Communion in the Catholic Church. It will include a section regarding standards for politicians and public figures who support laws allowing abortion, euthanasia and other “moral evils.”

The proposed document has already caused controversy. The Vatican has warned against exclusively focusing on abortion and euthanasia and cautioned that the document could further divide U.S. Catholics.

As a Catholic scholar of religion, I would argue that battles over Communion are nothing new in the Catholic Church.

The importance of Communion 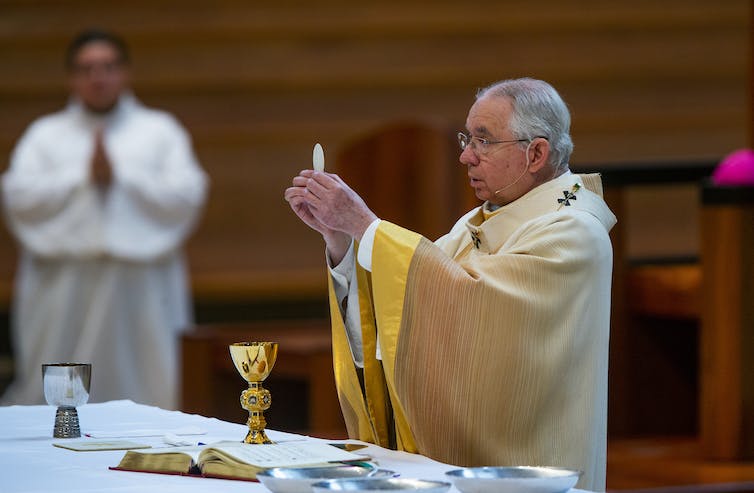 The U.S. Conference of Catholic Bishops is debating which Catholics are worthy of receiving Communion.
AP Photo/Damian Dovarganes, File

In the Catholic Church, the Communion service is one of seven rituals called sacraments that have a primary significance. During this service, called a Mass, Catholics believe that the bread and wine, when specially blessed by a priest, become the body and blood of Jesus Christ. Ritually consuming this bread and wine is a special way to “commune,” or be united, with Jesus Christ.

Catholics call both the celebration of Mass and the blessed bread and wine the Eucharist, from the Greek word meaning “thanksgiving.” Receiving Communion can also be called receiving the Eucharist.

The Catholic Church teaches that in order to receive Communion, a person must not be conscious of a serious sin – such as murder or adultery – that has not already been absolved through confession to a priest.

In early Christianity, rules about receiving Communion could be strict. Christians who were known to be guilty of serious sins were not supposed to receive Communion until they went through a process of reconciliation with a local bishop. In the Middle Ages, very few Catholics actually received Communion at all, as many believed that they were unworthy to do so.

The possibility of scandal

In the 19th and 20th centuries, the Catholic Church encouraged a more frequent – even daily – reception of Communion.

Still, one of the main concerns surrounding Communion is that someone publicly known to be committing serious sins would receive Communion. Such cases create “scandal.”

In the Catholic Church’s terminology, scandal is “an attitude or behavior which leads another to do evil.” So, someone who accepts Communion while at the same time publicly continuing in sinful behavior encourages others to continue to do the same as well.

When it comes to public policy, the compendium of Catholic doctrine, the Catholic Cathechism, specifically states, “they are guilty of scandal who establish laws or social structures leading to the decline of morals and the corruption of religious practice.”

There is a history of the Catholic Church denying Communion to those participating in what is considered publicly sinful behavior.

One of the most famous examples is of Ambrose, bishop of Milan, who baptized the theologian Augustine of Hippo, who later became one of the most influential figures in Christian history. Ambrose denied Communion to the Roman Emperor Theodosius in the fourth century. Enraged by the lynching of a leader of a Roman army garrison, Theodosius gave orders that led to a massacre in the port city of Thessalonica, which killed 7,000 citizens. In a letter calling for Theodosius to take responsibility for his actions, Ambrose wrote, “Are you ashamed, O Emperor?”

From 1208 to 1214, Pope Innocent III asked his bishops to place England and Wales under “interdict,” or “prohibition,” which banned the performance of all sacraments – including the Eucharist – except for baptism and confession of the dying. The reason for this extreme act was said to be that King John had rejected Innocent III’s candidate for the important position of archbishop of Canterbury.

In the early 20th century, Irish bishops spoke against continuing acts of violence by Irish nationalists who opposed the Anglo-Irish treaty of 1921, which established the Irish Free State and ended the Irish War of Independence. In a letter published on 22 October 1922, the Irish bishops denied absolution and Communion to “irregulars” using violence against the “legitimate authority” of the government.

More recently, it was reported in 2011 that priests in Malta were denying Communion to Catholics who supported legalizing divorce. In the United States, presidential candidate John Kerry was denied Communion in 2004, reportedly for his support for abortion rights. The same issue saw Joseph Biden denied Communion in 2019 by a church in South Carolina.

At the same time, the Catholic Church has also been questioned for not denying Communion to Catholic public figures who have behaved sinfully. 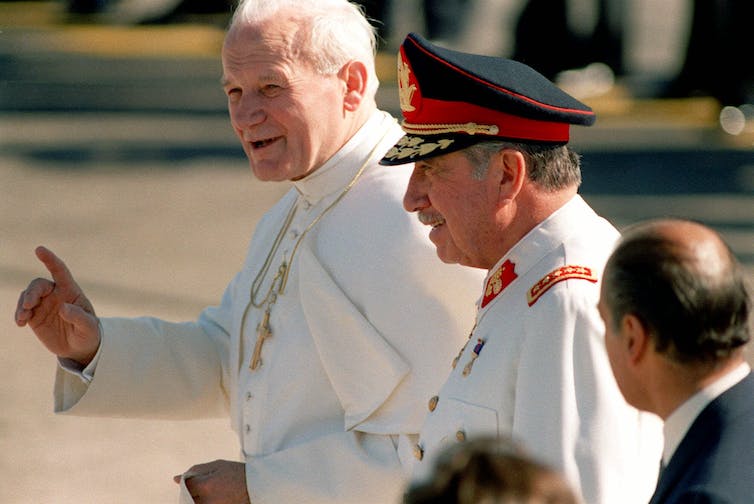 In his trip to Chile in 1987, Pope John Paul II criticized the military dictatorship under the Army General Augusto Pinochet. Pinochet led a revolt that toppled the elected government. Thousands were tortured and executed under his rule. But the pope still gave Pinochet Communion.

When Pope John Paul II was beatified – a crucial step in becoming named a saint – Zimbabwe’s ruler, Robert Mugabe, was in attendance. Among many human rights abuses, Mugabe sanctioned the killing of 20,000 people belonging to the Ndebele ethnic minority who were loyal to his rival, Joshua Nkomo. Nonetheless, Mugabe was allowed to take Communion at the Vatican, in St. Peter’s Square. Some in the African Catholic media called this a “scandal.”

Pope Francis has stated: “The Eucharist, although it is the fullness of sacramental life, is not a prize for the perfect but a powerful medicine and nourishment for the weak.” And so one of the key issues that the United States Conference of Catholic Bishops’ proposed document will surely need to address is when human weakness becomes serious sin and scandal.

While the United States Conference of Catholic Bishops will issue guidelines for reception of Communion, it will be the task of individual bishops to decide how to put them into practice. And some Catholic bishops, notably Cardinal Wilton Gregory of Washington D.C., have said they will not deny communion to President Biden in their jurisdictions.

At the present time, the Catholic Church in America is highly polarized. For his part, President Biden, who goes to Mass every week, has said that he has no plan to change how he worships. In such a context, U.S. Catholic bishops will have to move forward very carefully. 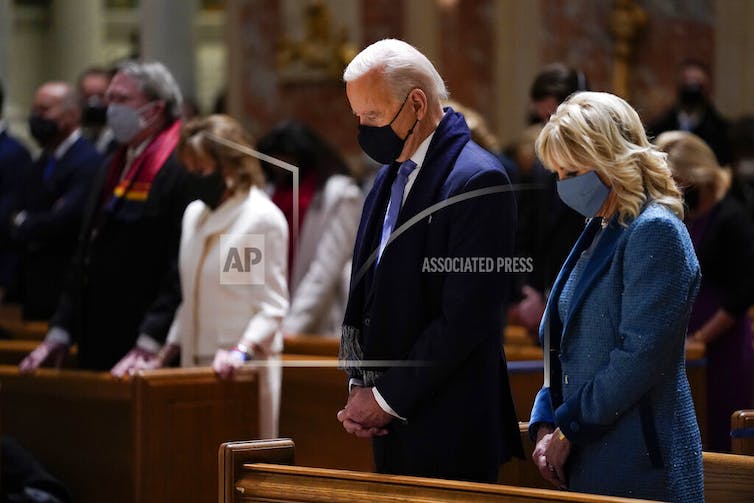 (Mathew Schmalz, Professor of Religious Studies, College of the Holy Cross. The views expressed in this commentary do not necessarily reflect those of Religion News Service.)

Catholicism
Pope urges Congo youth to reject corruption and they respond
Follow us on Facebook!
Submit your photos to RNS