(RNS) — As we begin our Fourth of July celebrations this weekend, our red and blue divides will likely be as much on display as the traditional bunting and flags that unite these colors along city streets across the nation.

While we primarily think of these divides as partisan, they run much deeper than politics. They stem from two distinct and incompatible worldviews imported to the Americas from Europe between the 15th and 19th centuries.

One worldview, drawing on Enlightenment ideals and an egalitarian reading of the Bible that later animated the abolitionist movement, is encapsulated in the words from the Declaration of Independence: “We hold these truths to be self-evident, that all men are created equal, that they are endowed by their Creator with certain unalienable Rights.”

While that remarkable founding document has its flaws — it refers to Native Americans as “merciless Indian Savages” and did not extend these rights to other non-European peoples or women — Americans have continued to broaden its core principle to include all people.

But there is an older, competing worldview that still haunts American culture, living on in the presumptions, if not the conscious minds, of many white Christian Americans. Known as “the Doctrine of Discovery,” it claims that European civilization and Christianity were superior to all other cultures, races and religions.

The doctrine has its roots in a series of 15th-century papal bulls, which merged the interests of European colonialism, including the African slave trade, with Christian missionary zeal. The most relevant edict for the American context was issued by Pope Alexander VI in May 1493, with the express purpose of validating Spain’s ownership of “undiscovered” lands in the Americas following the voyages of Christopher Columbus the year prior.

That history may seem irrelevant to us today, but in giving Europeans a divine right to seize the lands of non-Christian peoples anywhere in the world, it furnished the foundational lie that America was “discovered” and enshrined the innocence of “settlers” in the story white Christian Americans told about themselves.

If Europeans were superior to all others, enslavement and colonial conquest were merely the means of improving the temporal and eternal lot of Indigenous peoples. So conceived, no actual atrocities could possibly tilt the scales of justice against these immeasurable goods. 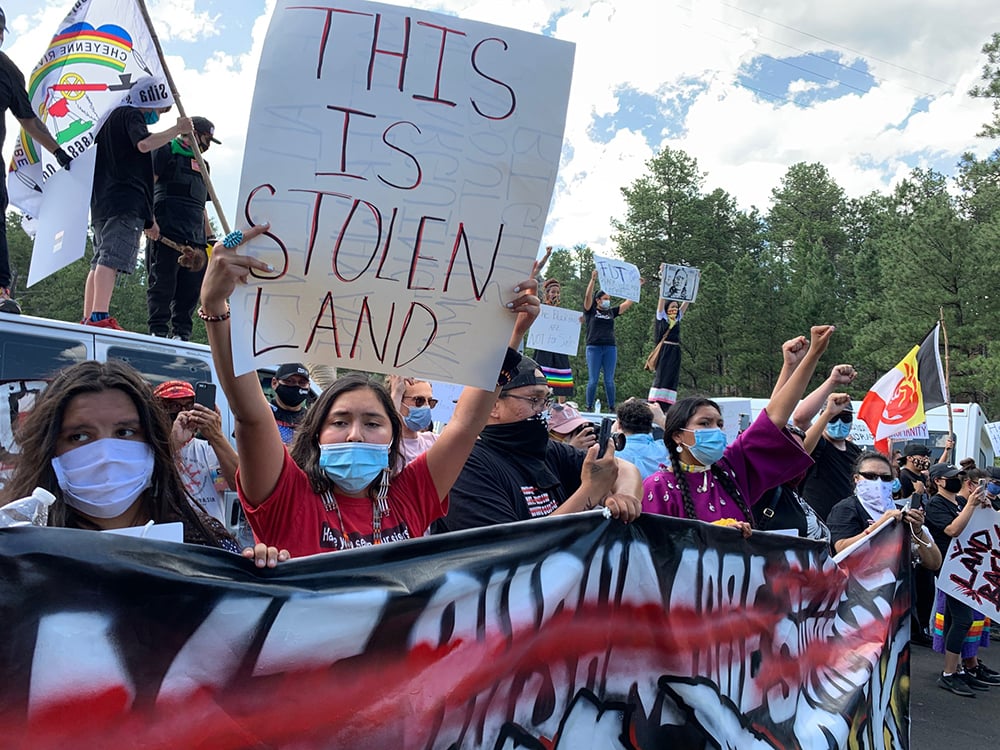 Native American protesters and supporters gather at the Black Hills, now the site of Mount Rushmore, on July 3, 2020 in Keystone, South Dakota. A multi-generational gathering, led by many young women and including different tribes, peacefully held the line. (Photo by Micah Garen/Getty Images)

Far from irrelevant, this attitude has chased us through American history to this day. It was used by Thomas Jefferson as president to justify the Louisiana Purchase and the mistreatment of Native Americans in that territory. It was formally incorporated into U.S. law in Johnson v. M’Intosh in 1823, which held, by unanimous decision, that the expulsion of Native Americans from their lands was justified by “the character and religion of its inhabitants… the superior genius of Europe… (and) ample compensation to the (Native Americans) by bestowing on them civilization and Christianity, in exchange for limited independence.”

Our continued reliance on that legal precedent was the key reason that the U.S. was one of only four countries, out of 147, to vote against the adoption of the Declaration of the Rights of Indigenous Peoples at the 2007 United Nations General Assembly.

Culturally, this doctrine of white Christian supremacy continues to threaten the promise of equality and American democracy. These competing ideals are colliding like tectonic plates, pushing the contradictions into bold relief. We saw Barack Obama, the nation’s first Black president, followed by the ascension of Donald Trump, who repeatedly questioned the authenticity of Obama’s Christian faith and citizenship, and who nearly 6 in 10 Americans believed was actively encouraging white supremacist groups at the end of his term. An image of the late Georgia Congressman and civil rights pioneer U.S. Rep. John Lewis is projected onto the pedestal of the statue of Confederate Gen. Robert E. Lee on Monument Avenue, Wednesday, July 22, 2020, in Richmond, Va. The statue has become a focal point for the Black Lives Matter protests in the area. (AP Photo/Steve Helber)

In 1852, in one of the most important speeches in our nation’s history, Frederick Douglass asked a pointed question to his mostly white audience, “What, to the American slave, is your 4th of July?” Pointing out the particular pain that the oblivious white celebration of lofty ideals inflicted on African Americans, Douglass declared, “I am not included within the pale of this glorious anniversary!… This Fourth (of) July is yours not mine.”

In essence, he was declaring — as many Black civil rights leaders following him have done — that the Fourth of July had become more a celebration of the domination justified by the Doctrine of Discovery than the liberation imagined by the Declaration of Independence. He was struggling with whites’ assertions that they were the superior race and European Christianity the pinnacle of human civilization.

Today, though few would publicly affirm the troubling tenets of the Doctrine of Discovery, a significant number are still possessed by the spirit of white Christian innocence. But it was always the former that justified the latter. If we find white Christian supremacy indefensible, we also must relinquish the claims to innocence it supported.

This surrender, of course, is daunting to those of us who consider ourselves white and Christian. Fears about lifting this veil are the reasons why our fiercest conflicts today involve history. Nearly 40 years ago, James Baldwin put his finger on the pulse of such fears: “The real terror that engulfs the white world now is a visceral terror…. It’s the terror of being described by those they have been describing for so long.” This Fourth of July, we have an opportunity to celebrate patriotism differently — as a passion for the democratic ideal of equality and a commitment to narrowing the gap between that ideal and our lived reality.

(Robert P. Jones is the CEO and founder of PRRI and the author of “White Too Long: The Legacy of White Supremacy in American Christianity,” which will be released in paperback on July 13, 2021. The views expressed in this commentary do not necessarily reflect those of Religion News Service.)