(RNS) — For Jehovah’s Witnesses, the pandemic has meant putting principles ahead of personal preferences.

“Our preference is to meet together, to hug one another, to greet one another, to see each other’s smiles, but our principles won’t let us do that, not yet,” said Robert Hendriks, U.S. spokesman for Jehovah’s Witnesses.

For the second year, the global denomination of 8.6 million is holding its annual large-scale summer worship conventions online through August. Kingdom halls, where congregants would typically meet twice a week, remain closed across the country. Door-to-door preaching has not resumed.

Hendriks said these decisions were made early on in the pandemic. Congregants continue to solely meet on Zoom. Letter writing and phone calls have replaced door-to-door knocking.

The Cariaga family sits together to work on letter writing. Photo courtesy of Jehovah’s Witness

“We felt at the time that to go to somebody’s door and knock on their door during a pandemic would be completely contrary to the reasons why we go to their door,” he added. “We believe life is sacred and that is not to be taken lightly. We need to protect our life and the lives of others.”

Hendriks said this has been a big change “because obviously we’re a very public organization.” Last year — when the Witnesses canceled close to 800 conventions in cities in the U.S. — was the first time since 1897 that they had not held their in-person conventions.

The year before the pandemic, in 2019, they held 5,752 worldwide conventions, including a meeting of 40,000 Witnesses in Phoenix that contributed an estimated $60 million to the local economy, according to The Arizona Republic.

In total, the 2019 conventions attracted more than 14.1 million attendees from across the globe, including millions who are not members of the Witnesses.

Currently, congregants are gathering for the virtual convention dubbed “Powerful by Faith!” that the Witnesses said is being delivered in more than 500 languages in a span of six weekends during July and August. The program, usually held Friday through Sunday, is expected to unite some 15 million to 20 million people in 240 countries. Sessions are available for streaming or downloading.

The Huiltron family sits together on the couch to watch a virtual convention in 2020. Because of COVID-19, services shifted to online and will continue online based on a recent announcement. Photo courtesy of Jehovah’s Witness

The convention features symposiums reminding attendees that “Faithless People Can Acquire Faith!” and shows participants how to “Use Creation to Build Your Faith.” The sessions are filled with Scripture teachings, prayers and music video presentations.

Joel and Terry Hernández, of Santa Ana in Orange County, began attending the virtual convention last Sunday. They’d typically attend the convention at the Long Beach arena, where they would unite with congregants from other areas. While they miss the in-person connection, they said the virtual gathering helps “lift up our spirits.”

In the wake of the COVID-19 pandemic, the Hernándezes have written and sent letters to residents and friends in the neighborhoods surrounding their congregation in the city of Orange. This replaces the door knocking they would normally participate in. 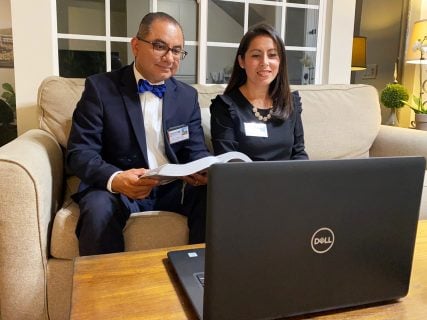 Joel and Terry Hernandez join in the virtual convention from their couch. Photo courtesy of Jehovah’s Witness

In these letters, Terry Hernández likes to include Scripture from Isaiah 41:10: “Fear not, for I am with you; be not dismayed, for I am your God; I will strengthen you, I will help you, I will uphold you with my righteous right hand.”

“A lot of people, because of the isolation, they feel lonely … I try to remind them that even though we might feel alone, we’re not. God is with us and it’s like he’s holding our right hand,” she said.

In the letters, she said, they direct people to the jw.org site, where they can access resources and affirmations addressing suicidal thoughts and anxiety.

For Denis and Jackie Stjepanovic, of San Pedro in Los Angeles County, their ministry “changed overnight.” They would often set up a public witnessing cart on a downtown LA corner and reach out to passersby. They’d also meet twice weekly in a building in Wilmington that would host numerous diverse congregations speaking Korean, Japanese, Spanish and English.

“We have been so impressed with our religious leaders, our organization,” he said. “We were already ahead. … We stopped our meetings before we even had to.”

To Jackie Stjepanovic, it’s comforting not having to make the decision of whether she feels safe enough to meet in person.

“Even though things are opening up, you’re still feeling there’s a certain level of uncertainty,” she said. “By continuing to keep everything online … there’s no nerves.”

Said Hendriks: “We went into this pandemic, made decisions very cautiously. We’re going to come out of this pandemic in the same manner.”