(RNS) — If you want to buy a piece of American religious history, then — as Billy Graham might have said — the time is now.

A North Carolina cottage that the famed evangelist and his wife, Ruth Bell Graham, once called home is for sale. The Grahams bought the four-bedroom house at 198 Mississippi Road in the 1940s to be close to Ruth’s parents.

“I was born during the time my family lived in the house,” the Grahams’ daughter Ruth said in a press release announcing the house being for sale. “The Los Angeles Crusades and (my father’s) tour of England happened during those years … it is where it all began.”

The house, which has two bathrooms and is listed for $599,000, is not far from the Montreat Conference Center, a famed Presbyterian retreat — Ruth Bell Graham’s parents were Presbyterian missionaries, and she remained a Presbyterian after marrying her Baptist husband. She died in 2007. Her husband died in 2018.

“This hidden gem is a chance to own a piece of history,” according to the listing.

In recent years, the cottage has been used for vacation rentals, listing on the short-term rental site VRBO.com for $332 a night. (It is currently booked for most of July.) A video flyover and tour of the property is posted online.

RELATED: Ruth Graham: the silent rock behind the famed evangelist 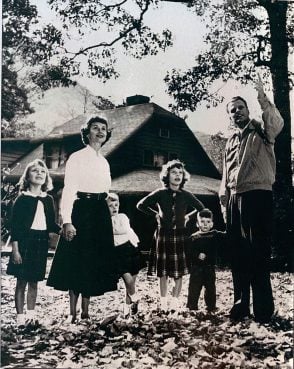 The Graham family at their home in Montreat, North Carolina, in an undated photo. Photo courtesy of Single Point Media

The Grahams moved from the house in 1957 but remained in Montreat, according to an interview with the younger Ruth Graham in the Ashville Citizen-Times. She said she is selling the house to help pay for her daughter’s medical costs.

She told the newspaper she has approached her siblings about buying the house but did not speak with the Billy Graham Evangelistic Association, run by her brother Franklin.

A spokesman for the BGEA told the Citizen-Times that the Graham siblings are close, and that “they love each other deeply and support each other.”

Potential buyers will have to act quickly. Viewings of the home will be held July 19 to 22, with offers to be reviewed on July 23.

“No drive-bys, please,” the listing requests.