LONDON (RNS) — Petertide — the days around the feast of St. Peter on June 29 — is traditionally one of the most joyful seasons for the Church of England, a time for ordination of new priests and deacons. But this year’s Petertide has been marred by what many have interpreted as an attack on the future of Anglican priesthood itself.

As Britain’s national church prepared to gather for its General Synod, which begins Friday (July 9), one of its most senior clerics submitted a paper for discussion arguing that the future lies not with clergy in the pulpit, but with worshipping communities led by lay people.

Archbishop of York Stephen Cottrell — second-only in the hierarchy to the archbishop of Canterbury — first floated his ideas last year in a report from a “Vision and Strategy” committee that Cottrell heads. But its publication last month, just before the laity, bishops and other clergy attended the Synod sessions online, has caused an outcry.

RELATED: Boris Johnson and Britain are having their own Catholic crisis

Cottrell’s latest reflections include not only a proposal for 10,000 lay-led communities within the next decade but a focus on young people: It urges a doubling of the number of children attending church and what he calls “active young disciples” by 2030.

The Church of England, he maintains, has to become a “church of missionary disciples,” to “become younger and more diverse,” and to become a church “where a mixed ecology is the norm” — referring to a mix of digital and lay-led services.

Cottrell’s plan does not include dismantling the ancient parish system, but his criticism of it — calling it ineffective “in the networks of contemporary life” — has caused fear that this will signal a major change in the way the church is structured, leading to church closures and cuts to clergy numbers. It also points to the growing influence of American-style evangelism in historically more staid Anglicanism.

The parish system is part of the warp and weft of England, especially in rural life. England’s more than 16,000 Anglican churches still dominate the country’s landscape, and the vicar and his role in village life pepper English culture and art, from the works of Jane Austen to the crime novels of Agatha Christie.

But attendance at those churches has been in decline for many years. Despite being the established church to which every citizen theoretically belongs, only an estimated 750,000 people out of an English population of 56 million attend regularly.

An internal church report, Perspectives on People, Money and Buildings, published earlier this year, showed that church attendance has declined 40% in 30 years and warned that stipendiary clergy positions — filled by priests and deacons supported by the church — would have to be pruned. In Chelmsford — Cottrell’s diocese before moving to York — 61 stipendiary posts are being cut by the end of this year. 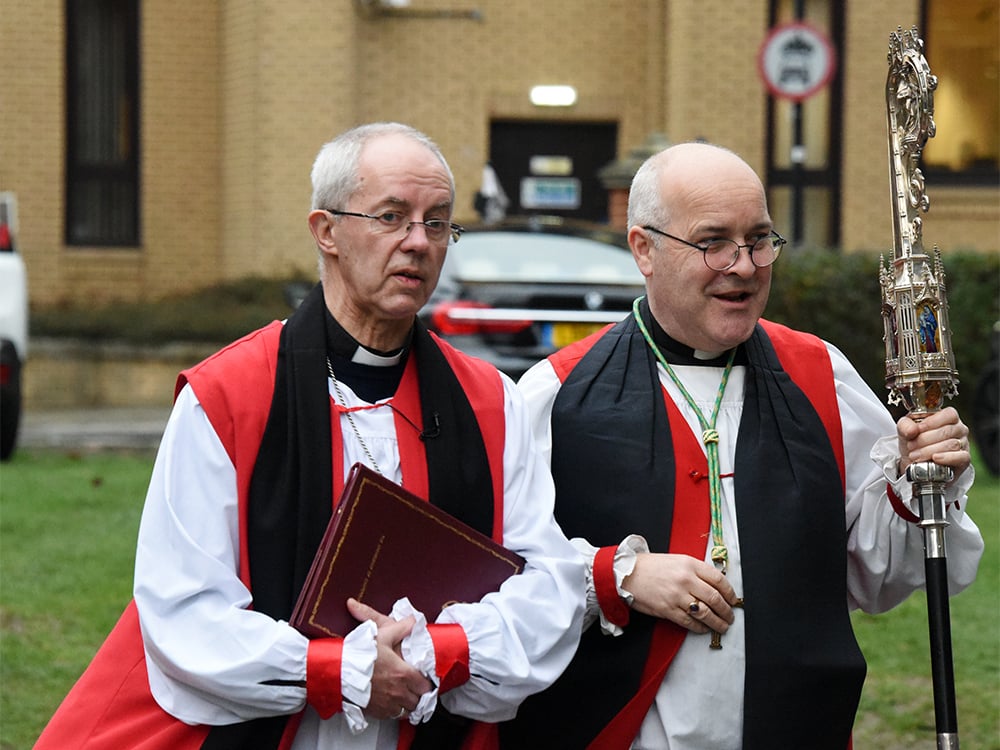 The biggest financial issue for the Church of England, however, may be its buildings. Three-quarters of its churches are officially listed as historic and demand costly maintenance. Some of those costs are covered by tourism and charitable grants, but the greatest burden falls on the church and each parish’s membership. If lay-led communities meeting in people’s houses are the future, many fear that more of these treasures will be closed.

The COVID-19 pandemic, which led to churches being locked, collections not taken and services moved online, caused an 8.1% fall in the church’s income as of November 2020.

But one of the most vocal Anglican priests, the Rev. Marcus Walker, vicar of London’s oldest parish church, the 900-year-old St. Bartholomew the Great, has warned that the bishop’s plan envisages the death of the parish and argues that “this must be fought.”

What has particularly alarmed Walker and his fellow priests is that publication of Cottrell’s paper coincided with another given at a conference on church planting supported by Cottrell and the Archbishop of Canterbury, Justin Welby, which goes much further in its critique of parishes. Critics believe this second paper lifts the lid on the thinking of an increasingly influential evangelical strand of Anglicanism.

Canon John McGinley, a priest in the Diocese of Leicester and a leader in New Wine, a church planting and renewal organization that is part of an evangelical surge in the Church of England, argued at a recent conference that lay-led communities release the church “from key limiting factors,” such as buildings and clergy pay and training. He envisages a new Anglican lay structure based on groups of 20-30 people meeting in people’s homes.

Archbishop Welby told the same audience at Multiply X 2021 that church planting would be a new discipline for Anglicans: “We are not meant to leave Jesus inside the church when we go out, and pick him up again when we come back in the following Sunday but to go with him,” said Welby.

Anglicanism has always performed a balancing act between a sacramental approach that puts the Eucharist at the center of the life of a worshipping community, requiring a priest to celebrate the sacrament — and an evangelical idea of church focused more on Scripture and lay leadership. Influenced by American evangelism, the latter has gained momentum in recent years.

The Rev. Andrew Lightbown, rector of Winslow, Buckinghamshire, said: “Within the reformed Catholic tradition of the Church of England we are a sacramental church. And it is also incredibly important that at the end of every service people are blessed and sent out to do God’s work. You don’t do that with a lay-led church. This plan could be rolling back hundreds of years of theology and changing the Church of England.”

RELATED: As churches reopen, let’s not lose the sense of sanctity in our homes

Lightbown also pointed out that a lay-led group of 20 would not have the same inclusiveness and sense of service to the whole community. “The parish church is not limited to the worshipping community. It is there for everyone. Will these new lay-led groups carry out baptisms, weddings and funerals?”

The Rev. Barnaby Perkins, of St. Peter and Paul in West Clandon, southwest of London, offers another difficult question in Cottrell’s proposal: Will lay people be diligent keepers of the faith? “There has been a change in the way the hierarchy views the clergy, but there is a need for them to teach the faith and order the life of the church,” he said.