(The Conversation) — City vehicles in Chesapeake, Virginia, will soon be getting religion.

At a meeting on July 13, 2021, city councilors unanimously voted in favor of a proposal that would see the official motto of the U.S., “In God We Trust,” emblazoned on every city-owned car and truck, at an estimated cost to taxpayers of US$87,000.

Meanwhile, the state of Mississippi is preparing to defend in court its insistence that all citizens, unless they pay a fee for an alternative, must display the same four-word phrase on their license plates. Gov. Tate Reeves vowed last month to take the issue “all the way to the U.S. Supreme Court should we have to.”

“In God We Trust” became the national motto 65 years ago this month. But over the past few years a string of bills and city ordinances has sought to expand its usage and presence. Such efforts include legislation requiring or encouraging the motto be displayed in government buildings and schools, on license plates and on police vehicles. 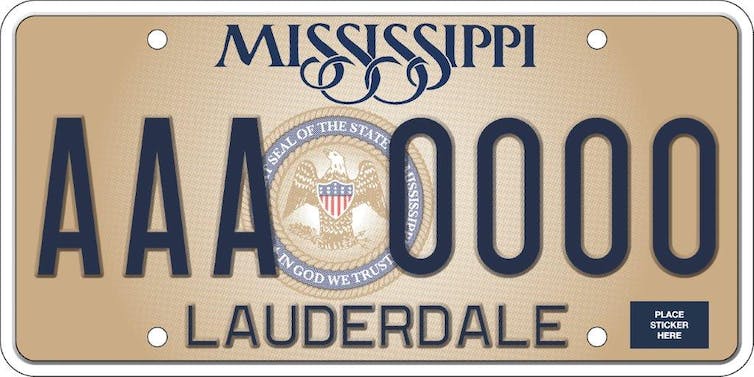 The rise of bills across the country at this time is no coincidence. It fits with a concerted effort by Christian nationalists who view the motto as a tool to help legitimize an agenda of passing legislation that privileges conservative Christian values.

As a scholar of religious and political rhetoric, I have observed how Christian nationalists are using what I call “theistnormative” legislation – government-endorsed policies, rituals, laws and symbols that use vague religious references, such as “God” – to encourage people to view the United States as a theistic collective – that is to say, as a nation of believers in God.

From coins to national motto

Christian nationalists played a key role in getting “In God We Trust” put on coins during the Civil War and ever since have attempted to use the motto as “proof” that the United States is a Christian nation.

Their efforts failed. But Christian nationalists had better success in getting the more ambiguous motto “In God We Trust” put on coins in 1864. It followed a report to the U.S. Treasury by the director of the U.S. Mint, James Pollock, an active member of the National Reform Association, in which he asked: “We claim to be a Christian Nation – why should we not vindicate our character by honoring the God of Nations in the exercise of our political Sovereignty as a Nation?”

Treasury Secretary Salmon Chase amends ‘In God is our Trust’ to ‘In God We Trust’ in an 1863 letter to James Pollock, director of the Philadelphia mint.
National Archives and Records Administration

Amid fears of “atheistic communism” during the Cold War a century later, Christian nationalists in the U.S. again tried and failed to pass a “Christian Amendment.” But they again found success in advocating for legislation that used vague religious references, culminating in the adding of “under God” to the pledge of allegiance and making “In God We Trust” the national motto on July 30, 1956. 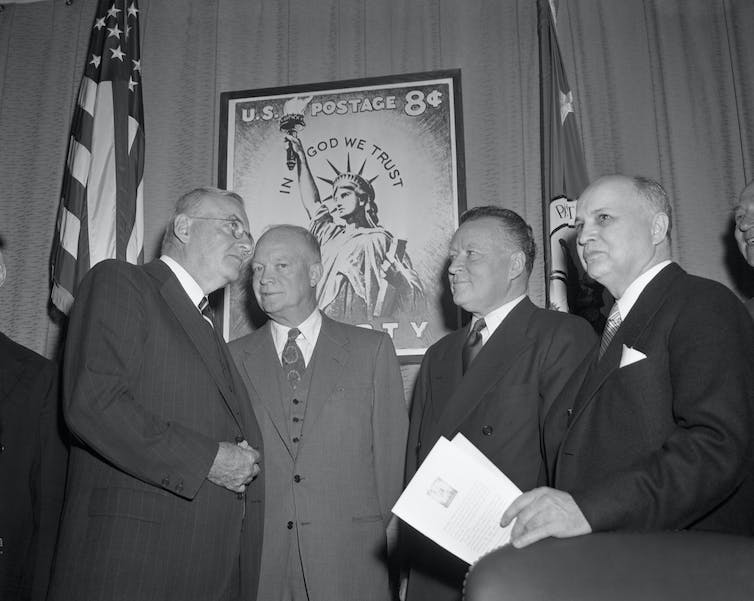 Since it became the national motto, conservative Christians have used “In God We Trust” to justify opposing abortion rights and same-sex marriage by suggesting that they violate the principles embedded in the motto.

Earlier this year, Mississippi state Sen. Cindy Hyde-Smith justified legislation that would ban voter registration on Sundays by holding up a dollar bill and saying, “This says, ‘The United States of America, in God we trust.’ … In God’s word in Exodus 20:18, it says ‘remember the Sabbath and keep it holy.‘”

While most Christian nationalists claim to support religious freedom – which would seemingly apply to all faiths – most believe Christianity, specifically white conservative Christian values, should be privileged in the public sphere.

Christian nationalists have increasingly turned to “In God We Trust” bills as a way to further legitimize their agenda. This is particularly evident in the “Project Blitz” initiative, led by the Congressional Prayer Caucus Foundation, which states its aim as “restoring Judeo-Christian principles to their rightful place.”

Project Blitz started in 2015 with the purpose of “blitzing” the country with legislation advancing Christian nationalism. As David Barton, a leader in the initiative, explained in a 2018 conference call with state legislators: “It’s kind of like whack-a-mole for the other side; it’ll drive ‘em crazy that they’ll have to divide their resources out in opposing this.”

One such success in Project Blitz was in Chesapeake, where the Congressional Prayer Caucus Foundation is based. The organization successfully pushed for the motto “In God We Trust” to be displayed at the City Hall.

After Project Blitz generated negative publicity in 2018, it was misleadingly rebranded as “Freedom for All.” During a recorded strategy meeting that was later circulated by the social justice think tank Political Research Associates, Lea Carawan of the Congressional Prayer Caucus Foundation explained, “As soon as we understood that they knew they were on to us, we changed the name; shifted things around a little bit […] we’ve renamed and moved on but it’s moving just as strong and just as powerfully.”

Up to 2018, the initiative had helped more than 70 bills relating to their agenda get proposed. The group continues to have successes in getting legislation not only proposed, but also passed. According to BlitzWatch, a group tracking Project Blitz initiatives, this includes bills that support Bible readings in schools and policies that allow adoption and foster agencies and health care providers to deny services based on religious grounds. But it is the “In God We Trust” bills that have seemingly been the most successful for Project Blitz.

According to the initiative’s 2020-2021 playbook – which was obtained by the religion news website Religion Dispatches – “In God We Trust” bills aim to recognize “the place of Christian principles in our nation’s history and heritage.”

While those behind “Project Blitz” claim the bills are not about converting people to Christianity, they also argue that the U.S. should be a Christian nation whose laws and policies “reflect Judeo-Christian or biblical values and concepts.”

As such, “In God We Trust” bills set the foundation for more explicitly conservative Christian legislation.

The playbooks suggest “In God We Trust” bills can “shore up later support for other governmental entities to support religious displays” to help America accept its “Christian heritage.” The Congressional Prayer Caucus Foundation also recommends legislators push for other types of bills including, as stated in their 2018-2019 playbook, a resolution to establish policy “favoring intimate sexual relations only between married, heterosexual couples.”

The risk of opposing

Despite its being the national motto for only 65 years, Christian nationalists have framed “In God We Trust” as part of the U.S.‘s founding tradition. Moreover, the motto has become an important rhetorical weapon for Christian nationalists – using it to advance their belief that governments and people are to “trust in God,” and more specifically their perception of a conservative Christian God.

(Kristina M. Lee, Ph.D. Candidate in Rhetoric, Colorado State University. The views expressed in this commentary do not necessarily reflect those of Religion News Service.)